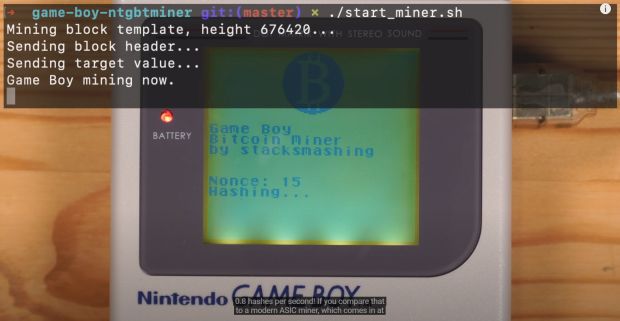 You can’t just turn the Nintendo Game Boy on and start mining Bitcoin, as there is no internet connection — so first, you’ll need the Raspberry Pi Pico which acts as a link cable to USB adapter. This is plugged into a PC which gives the Nintendo Game Boy an internet connection which is required for cryptocurrency mining, or else you wouldn’t be able to mine Bitcoin from your Game Boy, of course!

There are a few more steps required before you can get Bitcoin mining on your Game Boy, but when it does Nintendo’s portable game console is capable of pumping out 0.8 hashes per second, which when compared to a current-gen ASIC miner which pumps out around 100 terahashes per second… the GameBoy is 125 trillion — or 125,000,000,000,000x slower than the current-gen ASIC miner.