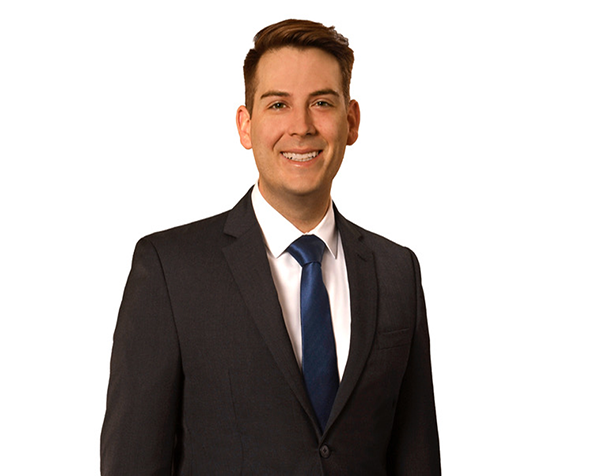 When Scott Rosenbach (JD ’20) began his college career, he was an aspiring architect.

“I quickly realized I wasn’t going to be the next Frank Lloyd Wright,” Rosenbach says.

A formative experience in a first-year English class spurred Rosenbach to switch his architecture major to English.

Rosenbach and his professors soon discovered that he had a knack for pinpointing evidence to support his arguments, and one of those professors asked him if he had considered a career in law.

At his professor’s recommendation, Rosenbach interned with a law firm and ended up loving it.

“I knew I wanted to make law my career after that internship,” he says.

When it was time to choose a law school, Rosenbach had lots of choices. Scholarships — like the Arthur B. Hayutin Endowed and the Henry G. Frankel Endowed scholarships that Rosenbach was awarded — played an important role in his decision to attend the Sturm College of Law at DU, he says.

“I knew that scholarships would allow me to pursue my passions. I could chase opportunities that I wouldn’t be able to pursue if my student loans were exorbitant,” Rosenbach says. “Student loan debt stifles choice: It’s a common theme in law school that people dash their dreams in favor of a higher paying job. No one should have to sideline their dreams because of student loan debt.”

After interning at several law firms and legal organizations and the Colorado Court of Appeals, Rosenbach realized his sweet spot was real estate law.

These in-the-field experiences, Rosenbach says, were one of the things he loved most about his time at DU. “Each experience gave me a different perspective on what it’s like to practice law,” he says.

Today, he is working in his dream field as a real estate attorney at Husch Blackwell. With over 700 attorneys, it’s a large firm — a legal setting that historically hasn’t attracted diverse attorneys, Rosenbach said.

As an openly gay man, Rosenbach said one of his key career goals is “to serve as a model to future diverse law students that it is possible to overcome barriers that have traditionally prevented people like me from reaching this point. Barriers like feeling you don’t belong in a certain setting or that your perspective isn’t valued,” he says.

Lifting others up, like Rosenbach says so many of his mentors at DU did for him, is an important part of his mission as an attorney.

Rosenbach now serves on the Board of the Colorado LGBTQ+ Bar Association and the Alumni Council for the Sturm College of Law. He also volunteers for the Denver Urban Debate League, which empowers students at Denver’s most underserved schools to participate in debate and find their voice.

Rosenbach says his scholarships played a critical role in putting him in a position to give back. “We all know the power of money. Giving to scholarship funds is so much more than that. It’s the power of gifting someone choice. It’s opening up an opportunity for someone to pursue their passions and contribute to the community in a way that they may not have been able to otherwise. It has a ripple effect,” he says.

To learn about how your gift in support of scholarships can make a difference in the lives of students like Scott, contact ScholarshipGiving@DU.edu.

Hackers Use Robinhood, Binance, And Ripple To Promote Scams — All You Need To Know