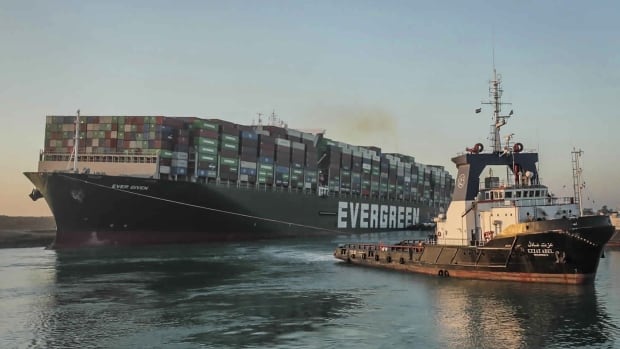 The cargo ship Ever Given is free after being stranded in the Suez Canal for nearly a week. But now, though the busy shipping channel has reopened, the saga isn’t over.

And the “ripple effects” of the episode on the global shipping network will eventually be felt here in Windsor, particularly by the grain industry, according to Steve Salmons, CEO of the Windsor Port Authority.

Locally, Salmons expects a trickle down effect in the coming weeks. The ships expected to arrive in Windsor to pick up grain harvested last year could be delayed as a result of backlogs on the Suez.

Those delays in moving grain product could have consequences for farmers’ bottom line, he said.

“In Windsor, we’re a major grain exporter,” he said. “Eighty per cent of all grain grown in the three-counties area here comes through the Port of Windsor and is exported out to across the globe.”

The huge cargo ship stuck in the Suez Canal, blocking it for nearly a week, has been set free. While the online fascination may soon fade, the shipping backlog could take a little longer. 2:01

“So, we don’t know ultimately what it’s going to mean to us. We do know there’s a trickle effect,” he said.

Normally, about $11.3 billion worth of goods are shipped through the canal daily, and there was a backlog of nearly 400 ships when Ever Given was moved on Monday.

The combination of the closure plus the backlog of other vessels waiting to get through amounts to two weeks lost, Salmons said.

“So when you lose two weeks out of an international world-connected transportation highway, you slow down the entire global economy, and that affects every one of us, no matter where you live on the globe.”

Windsor has the third-largest port on the Canadian side of Great Lakes, and the 10th largest in Canada, Salmons said.

“This is a significant port with a lot of material and product coming and going,” he said.

Salmons said the region could also see delays in the arrival of steel. And the Ever Given episode could ultimately affect what we see on store shelves in the near future.

Arrival of consumer goods shipped by container could be delayed at bigger ports like Montreal and Vancouver.

“We’re going to see, wait a minute, we don’t have that TV in stock. That patio set I wanted to buy this spring isn’t available because it’s sitting on a container ship two weeks late,” he said.