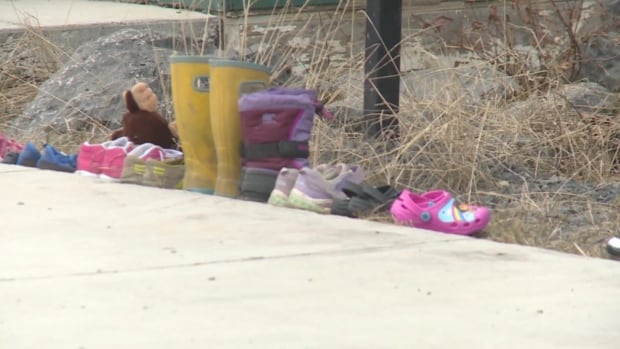 WARNING: This story contains details some readers may find distressing.

When an Inuvik resident noticed the many memorials across Canada to honour the children whose remains were discovered on the grounds of a former residential school in Kamloops, B.C., she felt she wanted to make a local contribution.

That’s why Molly McLeod initiated a walk to the greenhouse in Inuvik — which used to be part of the former Grollier Hall residential — as a kind of memorial.

“I decided to kind of make a little Facebook post and see if I can get some friends and colleagues and whatnot to join me,” McLeod told CBC News, adding it started around lunch hour Tuesday.

“We’re just going to walk from wherever we are, to the greenhouse and place some children’s shoes down for recognition.”

She said her plan was to put some shoes down, “say a little prayer for the children and see if anyone’s got some stories they want to share and have some chats.”

The Inuvik Community Greenhouse said online that it was on board. In a Facebook post, it said it would “humbly like to offer the space in front of the greenhouse as a space for vigil for the 215 lost children.”

McLeod describes her Indigenous descent as from her grandmother. Her sister is Kristine McLeod, deputy grand chief with the Gwich’in Tribal Council and her brother, who walked with her with his young daughter, is Kelly McLeod, president for Nihtat Gwich’in.

McLeod says she understands the ripple effect caused by residential schools, even in her own family, and has heard  stories from elders and aunts, uncles and parents.

“It’s like throwing a rock into water — the rock sinks, but the force of the rock hitting the water causes a ripple effect. And that ripple effect is seen and felt by many people, including myself,” she said.

“They came from a horrible, horrible life. And all they want to do is make a better life. They’re constantly haunted by the past.… And as a young woman, it’s my job not to hold that against anyone.”

McLeod says she hopes the walk and vigil today helps to bring awareness. She also hopes to try and gather everyone together “so we can all mourn together.”

“Nobody’s alone,” McLeod said. “We’re all here for each other.”

Support is available for anyone affected by the effects of residential schools, and those who are triggered by the latest reports.

The Indian Residential School Survivors Society (IRSSS) can be contacted toll-free at 1-800-721-0066.

A national Indian Residential School Crisis Line has been set up to provide support for former students and those affected. People can access emotional and crisis referral services by calling the 24-hour national crisis line: 1-866-925-4419.

In addition, the NWT Help Line offers free support to residents of the Northwest Territories, 24 hours a day, 7 days a week. It is 100% free and confidential. The NWT Help Line also has an option for follow-up calls. Residents can call the help line at 1-800-661-0844.