What Does The Coinbase Listing Mean For These Cryptocurrency Stocks?

Coinbase (NASDAQ: COIN) is set to go public through a direct listing today. And investors are hailing it as a “watershed” moment for the crypto space. The cryptocurrency exchange could fetch a valuation as much as $100 billion. That would make Coinbase more valuable than New York Stock Exchange’s parent Intercontinental Exchange (NYSE: ICE). It is certainly a big moment for crypto enthusiasts today as it is the first company specializing in cryptocurrencies to go public.

“I see this as a bridge between the disruptive decentralized cryptocurrency market and the traditional market … This IPO will bring cryptocurrency to the forefront, take away some of the obscurity, and allow people to invest in what I believe is gonna be a very, very significant presence as an alternative currency in the future.” – Jeff Sica, Circle Squared Alternative Investments founder

The Momentum Of Coinbase Stock Is Spreading To Other Cryptocurrency Stocks

Many leaders in their respective industries are starting to accept the idea of cryptocurrency in fear of lagging behind current trends. For instance, shares of Tesla (NASDAQ: TSLA) are now available as crypto stock tokens on Binance. The EV manufacturer will be the first to trade as a token on Binance’s exchange so that users can buy fractional shares of Tesla. This move has further demonstrated the utility of cryptocurrencies and put an even bigger spotlight on top cryptocurrency stocks.

Even semiconductor giant NVIDIA Corporation (NASDAQ: NVDA) is not missing out on the party. In March, the company announced that it would be launching a crypto mining GPU. This move would allow the company to better target the crypto mining space. So if you believe cryptocurrency is more than just hype, why not look at some of these crypto stocks in the stock market today?

[Read More] Best Growth Stocks To Buy This Week? 4 For Your Watchlist

Riot is a cryptocurrency company that focuses on bitcoin mining. The company aims to be one of the largest and lowest-cost producers of bitcoin in North America. It has been an eventful year for the company as the company’s share price tripled in value over the year. In fact, the stock has been on a steady incline for the past week. This is largely due to the company announcing the signing of a definitive agreement for the acquisition of Whinstone for a total purchase value of $651 million last week. Riot sees Whinstone as a key component of its global strategy to become the industry’s leading Bitcoin mining network.

Earlier on Monday, the company also announced the operations update on its Bitcoin (BTC) output and holdings. Riot produced 187 BTC in March 2021, a boost of 80% over its pre-halving March 2020 production. When looking at the Q1 of 2021, the company produced 491 BTC, a rise of 75% compared to Q1 of 2020 before halving. These numbers would surely encourage investors as the value of bitcoin is now near its all-time high. With all these in mind, would you buy RIOT stock now?

Next on the list is Marathon Digital. It is a digital asset technology company that mines cryptocurrencies. To summarise, it focuses on the blockchain ecosystem and the generation of digital assets. It currently operates its proprietary Data Center in Hardin, Montana with a maximum power capacity of 105 Megawatts. Marathon also owns 2,060 advanced Application Specific Integrated Circuit (ASIC) Bitcoin Miners that are co-hosted in a facility in North Dakota. MARA stock has been performing exceptionally well in the stock market, showing over 450% gains year-to-date. 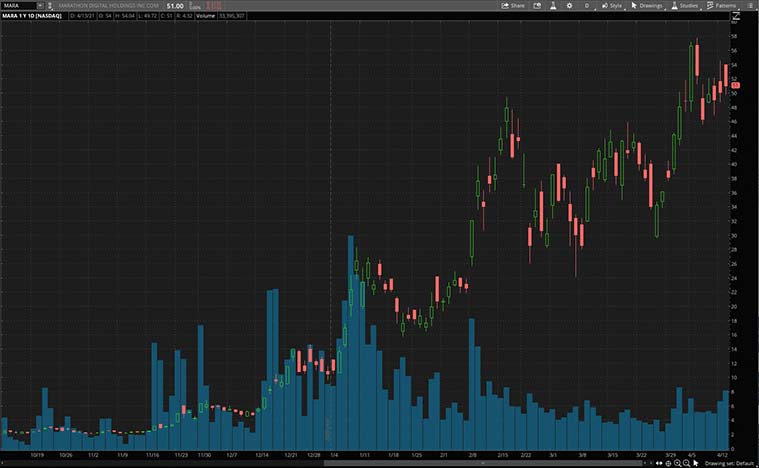 In early April, the company published its unaudited BTC production and miner installation update for the first quarter of 2021. Marathon produced 196 new-minted bitcoins, increasing total bitcoin holdings to 5134.2 with a market value of $301.9 million. Also, the company received approximately 10,300 S-19 Pro ASIC miners from Bitmain during the first quarter of 2021.

In March, the company announced that it will be launching the first Bitcoin mining pool based in North America that is fully compliant with U.S. regulations. The value of this move should not be understated as it could attract more institutional interest. With progressive plans already in place, would you consider buying MARA stock now?

Canaan is a China-based computer hardware manufacturer. The company provides supercomputing solutions through proprietary high-performance computing ASICs. The company made its name by inventing the world’s first ASIC-powered bitcoin mining machine in 2013. Since then, the growth of computationally advanced bitcoin mining never looked back. Fast forward today, Canaan is the second largest designer and manufacturer of bitcoin mining machines globally. CAN stock has doubled in value year-to-date. 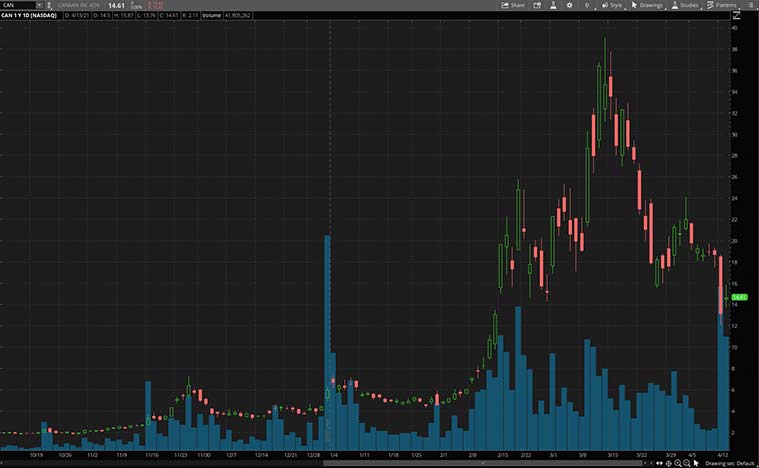 On Monday, Canaan released its unaudited financial results for the fiscal year ended December 31, 2020. The company boasted a net revenue of $5.9 million for the fourth quarter of 2020. Total net revenue was $68.6 million for the full year. It believes that total net revenue will improve in 2021 as the price of bitcoin is surging. Just like with many other companies, COVID-19 affected Canaan’s supply chain and hence its revenues last year.

However, the company remains confident that 2021 will be a fruitful year. The company has been expanding overseas, investing in its R&D department, and ultimately started to mass-produce its next-generation A-12 series of bitcoin mining machines. These efforts are showing results as the company has begun delivering the machines at a large scale in the first quarter of 2021. On that note, would you add CAN stock to your watchlist?

Last on the list, we have fintech giant PayPal. Most consumers would be more familiar with the company’s Venmo app. Through Venmo and a variety of other services, PayPal supports online money transfers globally. Given its role in facilitating contactless payments, PYPL stock has been performing stellarly throughout the pandemic. The company’s stock has risen by over 150% over the past year. 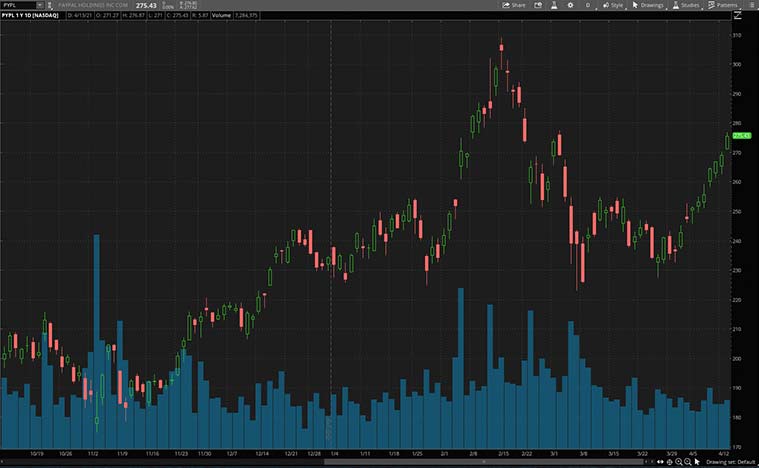 Starting March, PayPal will allow customers in the U.S. to checkout with cryptocurrency alongside other payment methods. The “Checkout with Crypto” (CwC) service significantly expands the utility of cryptocurrency via the PayPal wallet. Furthermore, this service is available at checkout with millions of businesses, according to PayPal.

On Tuesday, the company also launched Fraud Protection Advanced, a tool to protect customers from digital fraud. This service will include payment authentication via fingerprints, machine learning, and analytics to help businesses identify, investigate, and mitigate fraud transactions. This is a timely move as the rise of cashless transactions inevitably leads to rising digital frauds. All things considered, PayPal could well benefit from this in the long run. Therefore, would you invest in PYPL stock?