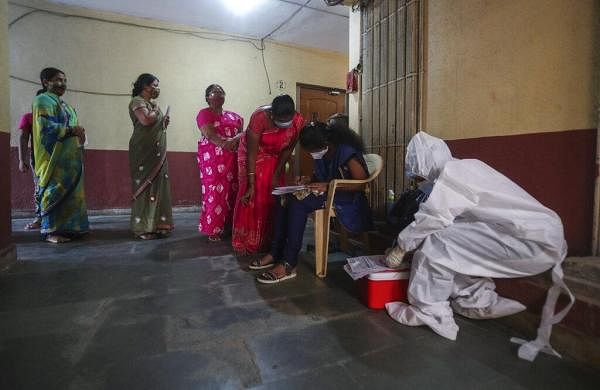 MUMBAI: The surge in COVID-19 cases in Mumbai and other parts of Maharashtra in the past few days is not the “ripple in the first wave” but a “mighty scary second wave”, a top health official said on Wednesday.

“Of late, we realise that this (surge) is not a ripple in the first wave, but a mighty scary second wave itself, which is starting,” Deshmukh told the television channel.

Deshmukh said the mortality rate was less this time, and it may be because the virulence is low.

However, Om Shrivastav, part of the state government appointed task force on the outbreak, said it was difficult to say whether the recent surge was the onset of the pandemic’s second wave, and coming to a conclusion would require scientific calculations based on several outbreak factors.

He told PTI that people must continue to strictly adhere to COVID-19 norms.

Incidentally, the Centre, in a letter to state chief secretary Sitaram Kunte had said that “Maharashtra is in the beginning of a second wave of COVlD-19 pandemic” and had asked it to plan for a “worst-case scenario” with sufficient lead time.

The state reported as many as 23,179 new cases of coronavirus on Wednesday, which is the highest single-day infection count so far in 2021, a health official said.

This is the sixth highest one-day spike of infection cases in the state since the pandemic began last year.

With these new cases, Maharashtra’s overall infection count rose to 23,70,507, the official said.

The state had reported its first COVID-19 case in March last year.

The daily number of cases had started rising gradually and in September last year, more than one lakh cases were added in Maharashtra within a span of merely a week.

The number of new single-day cases started gradually going down by the end of last year, although the count started witnessing an upward trend once against from mid-February this year.

With 84 deaths reported on Wednesday, the state’s fatality count jumped to 53,080, the official said.

As many as 9,138 patients were discharged from hospitals during the day, taking the recovery count to 21,63,391.

Pune division, which comprises civic bodies of Pune and Pimpri Chinchwad, as well as districts including Pune, Solapur and Satara, reported 5,268 cases during the day, which is the highest for the day across all the divisions in the state.

There are 6,71,620 people in home quarantine while 6,738 are in institutional quarantine.

India is headed for a second peak of coronavirus, the government confirmed on Wednesday.

The difference this time is that it will not be the metros but tier-2 and tier-3 cities closer to the rural areas that will be the worst hit.

“We are seeing an emerging second peak,” said Dr V K Paul, member (health), Niti Aayog, who also heads the national task force on Covid-19. Over the past two weeks, small towns across 70 districts have seen a steep rise of over 150% in new cases, with Ratlam (Madhya Pradesh) recording a shocking 500% spike. Fifty-five districts in 17 states have seen a 100-150% spike in the same time period.”

The alarming statistics also came up during Prime Minister Narendra Modi’s meeting with chief ministers on CMs to stop the ‘emerging second peak’ with decisive steps including strict enforcement of Covid protocols.

“Wherever necessary, micro-containment zones should be declared without hesitation,” he said, adding, “If we don’t stop Covid right now, there could be a nationwide outbreak.”

According to the details shared by the Union health ministry, India now has over 2.34 lakh active Covid-19 cases. has been a 43% week-on-week increase in cases and 37% rise in deaths.

Together, these states accounted for 71.10% of the 28,903 new cases reported on Tuesday. Overall, there are eight states where the pandemic graph is on a rising trajectory.

If Ripple wins SEC lawsuit, only Bitcoin and XRP will be safe – John Deaton