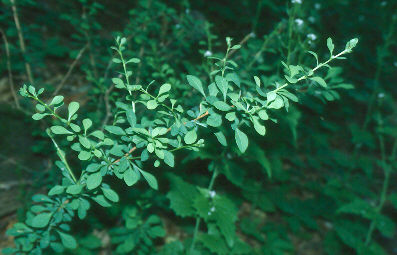 The following is an article written for the Ripples From the Dunes series by Jenna Brandl, Woodland Dunes Land Management Intern.

It closed in all around us. Sharp thorns, a height of almost six feet, and no way to reach its source without drawing blood. With the help of every intern and several pairs of clippers, we defeated the monstrous bush known as Japanese barberry (Berberis thunbergii). The entirety of this winter season has been a battle in conquering honeysuckle, buckthorn, and barberry within the preserve. While cutting through the honeysuckle and buckthorn with bow saws gave our arms quite a workout, it had nothing on the prickly barberry.

Japanese barberry is an invasive plant that was introduced to North America in the 1800s due to its popularity as an ornamental landscaping plant. Some of the characteristics to distinguish this woody shrub are the curving branches with hundreds of sharp spines that are usually about 4 to 10 mm long. They can also reach a height of six feet or taller when left untreated. Not only does this make it difficult to traverse through, but trying to reach its roots to cut and treat rewards you with plenty of scratches.

During the warmer months, small rounded leaves begin to grow and cluster around the spines, thus hiding their danger. The colors of this shrub can range from maroon, green, or a vibrant orange/red depending on the time of year. These plants also grow small yellow flowers around the month of May and will eventually grow reddish oblong berries throughout the colder months.

Unfortunately, these berries are one of the main factors in spreading this aggressive invasive plant. Consumers of these berries, typically birds, will travel great lengths across areas of land facilitating the spread of barberry seeds. By increasing the infestation of Japanese Barberry, it brings many detrimental ecological impacts. The soil being one of them. In previous research, it has been found that barberry changes the chemistry of the soil around it to its preferable conditions for growth. This change in soil pH and other nutrient levels will contribute to that changing of the entire surrounding ecosystem within a given area. Resulting in the disappearance of native plants and animal species.

In order to prevent the disappearance and destruction of our native ecosystems, we have to treat the infestation. This can be done with a two-step process. Step number one includes mechanical treatment. In other words, hand-pulling, cutting, mowing or using brush saws as an initial treatment. Step two requires a chemical treatment. By using herbicide applications to the cut stumps of the plant, it should prove effective in deterring any further growth. Resprouts from the previous plant may occur and should be treated similarly. By completing the previous two steps you too can help stop the spread of invasive Barberry!

This plant is listed by the DNR as restricted, meaning that for most cultivars selling or transporting the plant is prohibited. There are a few that produce very few seeds and don’t cause as much problem in the forest. Please be aware- there are other shrubs that can be planted in your home landscape, including native species.

Although the sharp spines proved to be a vicious enemy, the overall outcome was worth it to protect the natural environment. The battle against barberry was fought, leaving us with the battle scars and tales of our victory.