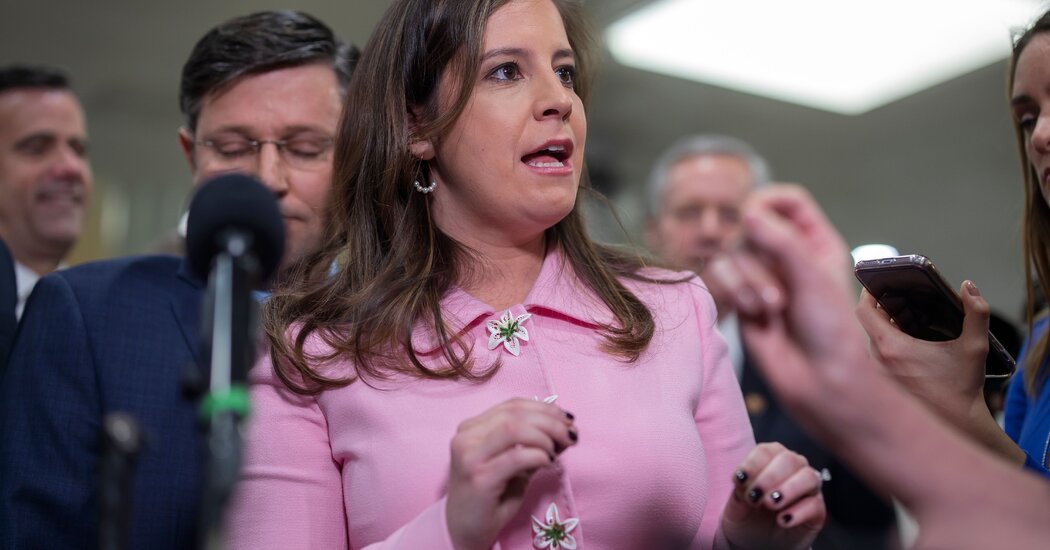 House Republicans are barreling ahead this week with their plan to oust Representative Liz Cheney of Wyoming, their No. 3, from her leadership post, the latest sign of the immense sway former President Donald J. Trump continues to hold over the party.

Representative Kevin McCarthy, the minority leader, on Sunday officially endorsed Representative Elise Stefanik of New York, who has revived Mr. Trump’s false claims about the 2020 election, to replace Ms. Cheney, the Republican conference chairwoman. Ms. Cheney has drawn fire from Mr. Trump and others in the party for repudiating those lies. The vote is expected on Wednesday.

“Yes, I do,” Mr. McCarthy told the Fox News host Maria Bartiromo when she asked whether he supported Ms. Stefanik’s bid.

“We need to be united, and that starts with leadership,” Mr. McCarthy said. “That’s why we will have a vote.”

The choice to stick with Ms. Cheney or remove her is widely seen as an indicator of the path the party will take in the post-Trump era. Will it return to the conservative tradition represented by Ms. Cheney, the daughter of a Republican vice president? Or will it continue marching in lock step with Mr. Trump — who remains popular with the Republican base even though the party lost the House, the Senate and the White House during his tenure — no matter how outlandish his claims?

Critics of Ms. Cheney insist that the vote is also about a lack of message discipline as the party heads into the 2022 midterm elections. While many Republicans quietly agree that President Biden was legitimately elected and that Mr. Trump bore some blame for the Jan. 6 attack on the Capitol, they say they would rather focus on countering Mr. Biden’s agenda instead of purging their party of lies and extremism.

For days, Mr. McCarthy had been working behind the scenes on behalf of Ms. Stefanik, who has a less conservative voting record than Ms. Cheney but has increasingly aligned herself with Mr. Trump. Mr. Trump and Representative Steve Scalise of Louisiana, the No. 2 House Republican, have also endorsed her.

Representative Jim Banks of Indiana, the chairman of the conservative Republican Study Committee who has sponsored legislation with Ms. Cheney opposing troop reductions in Afghanistan, made the case against her on “Fox News Sunday.”

“Right now it’s clear that she doesn’t represent the views of the majority of our conference,” he told the show’s host, Chris Wallace.

Some House Republicans tried to oust Ms. Cheney from her leadership post in February after she voted to impeach Mr. Trump for his role in inciting the attack on the Capitol. Ms. Cheney easily turned back that challenge — winning a 145-to-61 caucus vote — after Mr. McCarthy delivered an impassioned speech in her defense.

But now it is other Republicans who are rallying to her side.

Senator Bill Cassidy of Louisiana, who also voted to convict Mr. Trump in his second impeachment trial, argued that the party needed to adopt a bigger-tent philosophy in which both supporters and critics of Mr. Trump were welcome.

“You look at polls, there’s a whole group of folks that agree with Liz Cheney, and so for us to win in 2022 and 2024, we need everybody,” Mr. Cassidy said Sunday on NBC’s “Meet the Press.”

Representative Adam Kinzinger, Republican of Illinois, pointed out that Mr. McCarthy had said Mr. Trump bore responsibility for the Capitol riot — only to later insist that others stop talking about it.

“For me, I’m a conservative,” he added during an interview on CBS’s “Face the Nation.” “I’m going to fight for the soul of this party. But every member, not just leadership, every congressman, every state representative, every member of the party that pulls a ballot in the primary has to decide, are we going to exist on lies or exist on the truth?”

A pipeline that provides the East Coast with nearly half its gasoline and jet fuel remained closed on Sunday after yet another ransomware attack, prompting emergency White House meetings and new questions about whether an executive order strengthening cybersecurity for federal agencies and contractors goes far enough even as President Biden prepares to issue it.

The order, drafts of which have been circulating to government officials and corporate executives for weeks and summaries of which were obtained by The New York Times, is a new road map for the nation’s cyberdefense.

It would create a series of digital safety standards for federal agencies and contractors that develop software for the federal government, such as multifactor authentication, a version of what happens when consumers get a second code from a bank or credit-card company to allow them to log in. It would require federal agencies to take a “zero trust” approach to software vendors, granting them access to federal systems only when necessary, and require contractors to certify that they comply with steps to ensure that the software they deliver has not been infected with malware or does not contain exploitable vulnerabilities. And it would require that vulnerabilities in software be reported to the U.S. government.

Violators would risk having their products banned from sale to the federal government, which would, in essence, kill their viability in the commercial market.

The order, which is expected to be issued in the coming days or weeks, would also establish a small “cybersecurity incident review board.” The board would be loosely based on the National Transportation Safety Board, which investigates major accidents at air or sea.

The measures are intended to address the fact that the software company SolarWinds made for such an easy target for Russia’s premier intelligence agency, which used its software update to burrow into nine federal agencies as well as technology firms and even some utility companies. (Despite SolarWinds’ incredible access to federal networks, an intern had set the firm’s password to its software update mechanism to “SolarWinds123.”)

But federal officials concede that the regulations would still almost certainly have failed to thwart the most skilled nation-state intrusions and disruptions.

Theoretically, the order could be more effective against the kind of criminal ransomware attack that took over Colonial Pipeline’s headquarters networks last week. But it was unclear whether Mr. Biden’s executive order would apply to the privately held Colonial Pipeline.

When federal regulators late last year accused one of the world’s most popular cryptocurrency platforms of illegally selling $1.38 billion worth of digital money to investors, it was a pivotal moment in efforts to crack down on a fast-growing market — and in the still-nascent industry’s willingness to dive deeply into the Washington influence game.

The company, Ripple Labs, has enlisted lobbyists, lawyers and other well-connected advocates to make its case to the Securities and Exchange Commission and beyond in one of the first big legal battles over what limits and requirements the government should set for trading and using digital currency.

Ripple has hired two lobbying firms in the past three months. It has retained a consulting firm staffed with former aides to both Hillary Clinton and former President Donald J. Trump to help it develop strategy in Washington. And to defend itself against the S.E.C., it hired Mary Jo White, a former chairwoman of the commission during the Obama administration.

Ripple is just one of a long list of cryptocurrency companies scrambling for influence in Washington as the Biden administration begins setting policy that could shape the course of a potentially revolutionary industry that is rapidly moving into the mainstream and drawing intensifying attention from financial regulators, law enforcement officials and lawmakers.

“There is a tectonic shift underway,” Perianne Boring, the president of the Chamber of Digital Commerce, a cryptocurrency lobbying group, told other industry lobbyists, executives and two House lawmakers who serve as industry champions, during a virtual gathering last month. “If we don’t start planning and taking action soon, we have everything to risk.”