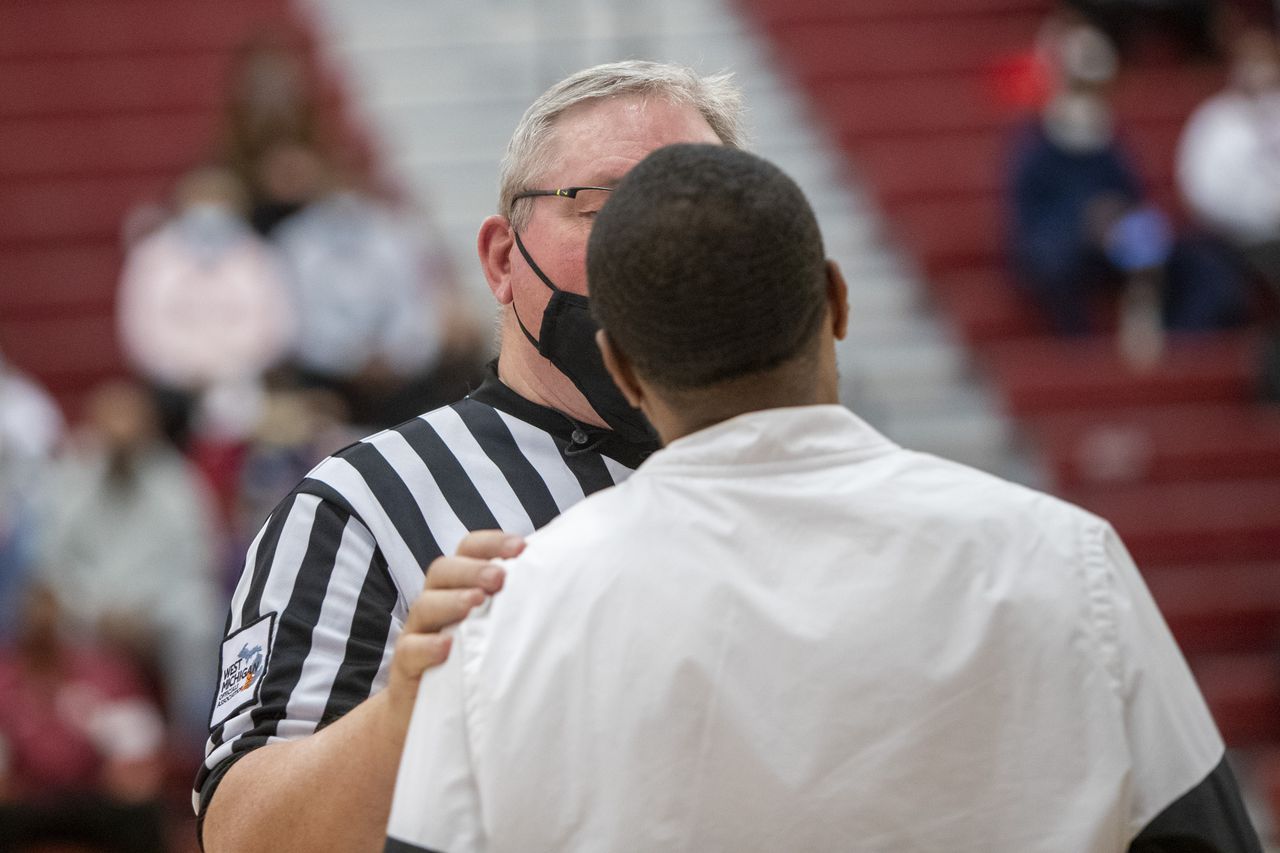 MUSKEGON – The high school basketball official who Muskegon coach Keith Guy claims pushed him during a game Friday night at Redmond-Potter Gymnasium has been suspended for the remainder of this season, the Michigan High School Athletic Association told MLive Monday.

Feenstra, who is currently out of the state, said he saw physical contact made by Ripple and that the investigation is ongoing.

The incident occurred with 1:03 remaining in a two-point game, which turned into a 59-52 OK Green Conference victory for Zeeland East over Muskegon. In what appeared to start as a verbal exchange between Guy and Ripple, the official grabbed Guy’s wrists. Ripple then put both hands on Guy’s chest and appeared to pushed Guy away before he headed toward the scorer’s table.

According to MHSAA communications director Geoff Kimmerly, the official has been suspended effective immediately.

MLive has been unable to reach Ripple for comment.

“The MHSAA does not condone any official making intentional contact with a coach. We expect that MHSAA officials will diffuse situations when possible and penalize under the rules when necessary,” Kimmerly told MLive.

“The MHSAA takes these incidents seriously. The official will be notified of the penalty once the investigation has been completed. We do not share penalties released for players, coaches or officials, although we believe officials should be held to the same stands and consequences that a coach would face if the circumstances were reversed.”

Feenstra said the OK Conference takes these situations very seriously and the organization is committed to taking appropriate action, but he noted that due process procedures are required.

Feenstra said he spoke with Guy on Saturday, and that he issued an apology to the coach. Feenstra called the incident “the antithesis of what we do in educational athletics.”

“Clearly, there was a contact that was made. And, I don’t have all the information, (but) that cannot happen. I mean, that should not happen. I can’t speak any more specifically, but that’s not anything (that is acceptable),” Feenstra said.

“Officials are taught to remain professional and have their conduct and their demeanor always promoting the spirit of good competition. That’s what we would expect and that’s (how) we will continue to train our officials and I know the WMOA (West Michigan Officials Association) works very hard on that, on officials’ conduct, even when emotions do get high during contests between the coaches and officials. That’s something we continue to work on.”

This is Guy’s ninth season as Muskegon’s head coach. On March 9, the 46-year-old was honored for becoming the all-time winningest basketball coach in Muskegon High School history. He guided the Big Reds to a 28-0 record and Class A state title in 2014. Guy coached at his Muskegon Heights alma mater for nine years prior to his arrival at Muskegon.

“I couldn’t get away with that. I don’t teach my team to do that and there was no reason for him to put his hands on me and push me. Just because you’re an official don’t give you the right to lay your hands on a grown man or anybody. I’m upset right now because I’m sorry for my kids. I’m sorry they had to see that …,” Guy paused to collect himself as he grew more emotional.

“I’m frustrated because we shouldn’t have to go through what we go through right now – in 2021. My kids (play hard) and I’m always looked at as the bad guy. I’m tired of it,” Guy said as his voice quivered.

On Friday night, Guy told an MLive reporter that he was planning to press charges against the official. When contacted Monday, he said he was going to let prosecutors decide the course of action.

A message seeking comment was left with Muskegon police.

The incident upset many people within Muskegon Public Schools and the community. Muskegon superintendent Matthew Cortez did not attend Friday’s game, but he was informed of the incident and saw it on video.

Over the weekend, Cortez addressed a memo to “Big Red Nation.” In the memo, he termed the incident as “highly inappropriate, unthinkable and inexcusable.” Cortez wrote that he wanted to give time for the MHSAA and the OK Conference to step forward and address the situation, but “alas there has been nothing. No messages, no calls, no emails, and no texts to me or my administration.

“This is unacceptable and I view silence as complicity.”

Since Cortez shared that letter, he has been in communication with the MHSAA executive director Mark Uyl as well as with Feenstra.

Gregory C. Pittman, Muskegon County Family Court Division’s presiding judge, issued a letter on Saturday to Uyl and Feenstra, not in his professional capacity but as a “citizen and devotee of high school sports.” Pittman echoed many of Cortez’s points, but he termed the incident “assault and battery” and that the official’s conduct warrants the pursuit of criminal charges as Pittman understands the relevant law.

“My whole thing about this is, where are the kids in this? I mean, that’s our whole reason for being. It’s the entire reason for the entire MHSAA and what are the two examples being set for our kids?” Cortez said. “One is a great one and one is an appalling one. I mean, think of the self-control it took for Keith. That’s a lot of self-control, and a lot of people wouldn’t have that. He maintained it because he knew his boys needed to see him rise above and that’s the way Keith is and that’s the example he sets for our entire athletic department.

“But we shouldn’t have to rise above. It seems like our district does an awful lot of rising above on instances that happened since I’ve been here and I had that conversation as well with Mark Uyl.”

Guy told MLive that he felt he was being unfairly treated by Ripple throughout the game. He said he expressed his concern to Ripple and said, “That is not right, man. My kids work hard just like everybody else and they deserve to be treated like everybody else.”

According to Guy, the Ripple responded with, “Don’t go there,” and pushed him. Guy said he asked the other two officials if they saw the push. Per Guy, one official said he did not see it and the other official was across the court and also said he did not see the exchange. According to Guy, the third official started making calls against Muskegon in a three-point game. Guy said he was issued a technical foul by the third official during a timeout.

Guy said his players were upset after the game, and that when he tried to look them in the eyes, he broke down because he could not adequately explain what happened.

“I don’t know what it teaches my kids, but all I know is they shouldn’t have to go through (this) – they should be treated the same way everybody is treated. That’s all I ask,” Guy said. “It’s just blatant. It’s out of control. There’s no excuse for it. Something needs to be done. I’m not saying all officials are bad; I’m just saying (Friday night), that was inexcusable. Again, my kids are hurting, I didn’t know what to tell them. They’re down about it. I just feel so bad for them.