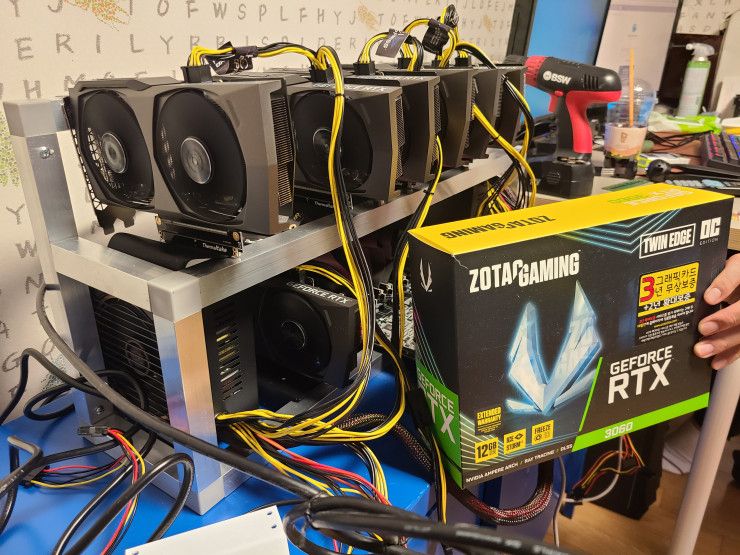 It’s true that nothing lasts forever, but Nvidia’s anti-mining limiter on the GeForce RTX 3060 didn’t last long at all. Cryptocurrency miners have circumvented the algorithm in a little over one month since the official announcement.

Intentional or not, Nvidia played a huge role in helping cryptocurrency miners crack the anti-mining limiter. The chipmaker released a GeForce beta driver that partially disabled the algorithm, and everything just went downhill afterwards. Some may argue that it was just a matter of time before cryptocurrency miners figured out a solution, but the driver was pivotal for bypassing the limiter.

A user from Quasar Zone successfully put together a 7-way GeForce RTX 3060 mining rig. Collectively, the seven Zotac Gaming GeForce RTX 3060 Twin Edge OC were delivering a hash rate up to 337 MH/s. According to the user, his setup was pulling around 1,020W of power from the wall. It’s impossible to install more than four graphics cards on a motherboard. Therefore, the user employed PCIe 3.0 x16 riser cables to connect the graphics cards to the motherboard, while mounting them on a rack. The owner didn’t reveal which motherboard or processor he’s using for his mining operation.

Contrary to popular belief, many motherboards offer a plethora of PCIe 3.0 x16 expansion slots, since the usage of PLX chips is pretty common nowadays. Just to name some examples, the Asus P9X79-E WS, X99-E WS and ASRock X79 Extreme11 are equipped with seven PCIe 3.0 x16 expansion slots. Or, if you want more modern offerings, the Asus WS X299 Sage and Gigabyte X299-WU8 are valid options as well.

Cryptocurrency mining doesn’t require one of the best CPUs, which is why miners favor old-gen platforms that are dirt cheap. The biggest challenge now is finding these outdated motherboards. Of course, there’s also the alternative where you can pick up an enterprise motherboard with a cheap Xeon chip and call it a day.

If you’re interested in mining, check out our list of best mining GPUs and our advice on how to optimize your GPU for Ethereum mining.