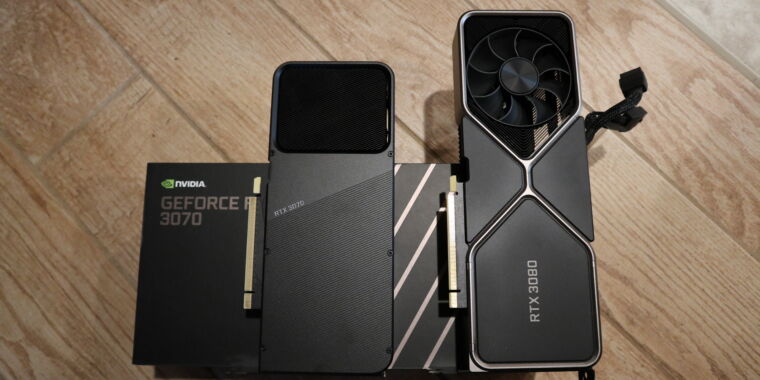 Nvidia’s GeForce RTX 3000-branded graphics cards are receiving an update off the factory lines starting this month: hardware-level flags meant to slow down the mining of the popular cryptocurrency Ethereum. Nvidia’s Tuesday announcement confirmed that most consumer-grade GPUs coming out of the company’s factories, ranging from the RTX 3060 Ti to the RTX 3080, will ship with a new sticker to indicate a “Lite Hash Rate,” or “LTR,” on the hardware, driver, and BIOS level.

If this move sounds familiar, that’s because Nvidia already took a massive swing at the cryptomining problem, only to whiff, with February’s RTX 3060. That GPU’s launch came with promises that its Ethereum mining rates had been cut in half from their full potential rate—a move meant to disincentivize miners from buying up limited stock. And in the GPU’s pre-release period, Nvidia PR Director Bryan Del Rizzo claimed on Twitter that “it’s not just a driver thing. There is a secure handshake between the driver, the RTX 3060 silicon, and the BIOS (firmware) that prevents removal of the hash rate limiter.”

Yet shortly after that card’s commercial launch, Nvidia released a developer-specific beta firmware driver that unlocked the GPU’s full mining potential. Remember: that’s firmware, not a BIOS rewrite or anything particularly invasive. With that cat out of the bag, the RTX 3060 forever became an Ethereum mining option.

All of this brings us to this week’s news and Nvidia’s new assurance that this time, scout’s honor, a beta driver leak won’t do the same thing to LTR versions of the RTX 3060 Ti, RTX 3070, or RTX 3080. The $1,499 RTX 3090 isn’t slated to receive an LTR version as of press time, and Nvidia has not indicated that existing RTX GPUs will be affected.

The company’s blog post doesn’t go into technical details on what’s different this time around. Instead, Wccftech delivers additional context, albeit without any citations to either Nvidia representatives or other leakers, about the new, mildly tweaked SKUs for these GPUs.

In Wccftech’s estimation, the biggest difference is a “different device hardware ID” on these SKUs that will give Nvidia “an additional parameter” to block older, crytpo-friendly BIOS firmware versions. In our estimation, without another errant beta firmware leak, this will leave miners with a difficult—but not impossible—challenge to overcome.

Wccftech also points to the new RTX 3000 series’ SKUs, including one welcome perk out of the box: the cards’ VBIOSes are all pre-patched to support Resizable BAR. Current GPU owners who want to take advantage of the IO-minded update must take the unusual step of updating their own GPUs’ VBIOS.

But Nvidia has once again only mentioned Ethereum in its anti-mining appeals, which is a reminder that other algorithms are out there in the wild and arguably not as affected by Nvidia’s top-level hardware update. Today’s announcement also leaves out the fact that Nvidia is happy to sell crypto-unlocked versions of the same GPUs, which they’ve dubbed Cryptocurrency Mining Processors (CMPs), albeit at higher prices and with their video-out functionality stripped out. While Nvidia hasn’t formally announced the CMP cards’ prices and availability, TechRadar spotted an entry-level Nvidia CMP with a hash rate comparable to a hobbled RTX 3060 (whose MSRP is $329) priced at approximately $720 at a Romanian reseller.

Tuesday’s Nvidia blog post concludes with an assurance that “we believe this additional step will get more GeForce cards at better prices into the hands of gamers everywhere.” But in a marketplace savaged by chip shortages and aggressive scalpers, and with a product line that has already taken one botched stab at crypto-halving measures, we’re not convinced that miners won’t swoop in to buy Nvidia’s LTR models and take their chances. Either way, with CMPs on the rise in Nvidia’s sales portfolio, we’re confident this isn’t the last of Nvidia’s assurances about anti-mining efforts in consumer-grade cards.