The update was provided by NVIDIA’s chief financial officer Ms. Collete Kress, who has stated that the company’s first-quarter fiscal year 2022 revenues will be above its guidance made earlier this year, with cryptocurrency products playing a major part in this.

At the end of its fourth fiscal quarter of 2021, NVIDIA had provided an earnings guidance estimate of $5.3 billion, as it expected a small deviation of +/- 2% from this estimate. NVIDIA has upgraded this estimate during its annual investor day today, as it now expects revenue during the first-quarter revenue will be higher than the initial estimate.

According to the CFO,

While our fiscal 2022 first quarter is not yet complete, Q1 total revenue is tracking above the $5.30 billion outlook provided during our fiscal year-end earnings call. We are experiencing broad-based strength, with all our market platforms driving upside to our initial outlook

However, there appears to be more to the story than simply ”all” of NVIDIA’s market platforms driving its revenue upside. According to a slide that Ms. Kress shared alongside her revenue guidance update during the investor day presentation, it is also being driven higher by cryptocurrency mining products. 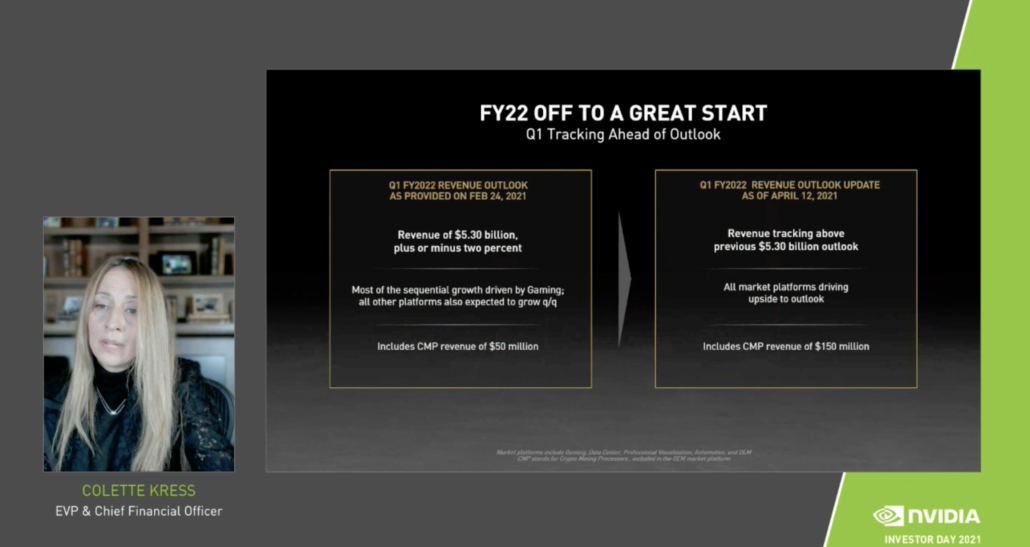 A screengrab from Ms. Kress’s presentation during the annual investor day today. As is visible, NVIDIA now expects its CMP (Crypto Mining Processor) products to bring in $150 million in revenue during the quarter instead of the $50 million it expected earlier. Image: NVIDIA Corporation 2021 Annual Investor Day 2021 Livestream

After providing a revenue guidance update during her presentation, the executive also assured listeners that even though crypto product revenues were expected to be higher this quarter, CMP (Crypto Mining Processors) were not “disrupting” its regular product supply, but instead they were “complementary” to it.

She also provided additional details about GPU supply, stating that NVIDIA expects demand to exceed supply throughout the course of this year, and the company will be able to procure sufficient supplies to ensure that it grows revenues beyond the first quarter.

Regarding NVIDIA’s pending acquisition of British chip design house Arm Ltd, Mr. Huang shared further thoughts on how his company will proceed once and if the deal clears approval. Stakeholders across the globe have raised concerns that NVIDIA’s acquisition will place the company in a position to negatively influence competitors owing to the near-ubiquitous nature of Arm’s products. NVIDIA has previously stated that it is ready to enter legally binding commitments for the acquisition, and its CEO has voiced appreciation for Arm’s business model.

Commenting on the affair, the executive assured listeners that “we will continue to license Arm to the industry,” going on to add that, “we can add the NVIDIA architecture to it,” elaborating that ‘architecture’ here implies products including NVIDIA’s GPUs, DPUS (Datacenter Processing Units), CUDA cores, NVIDIA AI and NVIDIA Omniverse to name a few. According to Mr. Huang, regardless of the central processing unit (CPU) that Arm’s customers choose to use, an NVIDIA architecture could be present to complete the equation.

The company’s shares jumped by more than 2% during Mr. Huang’s GTC keynote, preceding the investor day presentation. With a little more than ninety minutes left during trading today, NVIDIA Corporation is up by 5.86% at 15:52 EDT, as investors continue to show their confidence in the company’s ability to create new opportunities for itself.