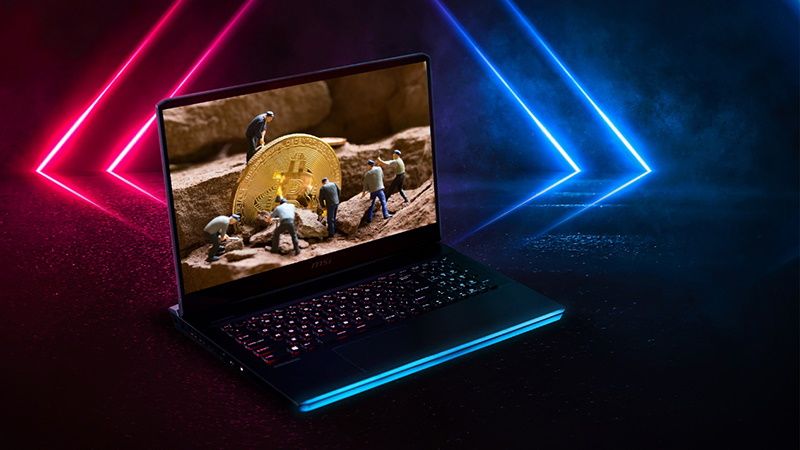 In a surprising move, MSI has published a blog advocating using its GE76 Raider to mine cryptocurrencies. Labelled as a ‘Mining experiment’, the blog post starts off with a brief history of mining before explaining how they’ll use the machine to mine crypto for a month to see if it’s worth it. Spoilers: it probably will be.

The laptop in question is something of a special case, in that it features a seriously powerful GPU, the 155W GeForce RTX 3080. Most laptops use much, much lower wattage GPUs, with 95W and 105W being far more common—due to the amount of cooling needed in such a tight environment. This machine also has an Intel Core i9 10980HK.

The blog goes on to state that they’re using the DaggerHashimoto algorithm for the experiment on the NiceHash platform. How good the machine is at mining is represented by its HashRate, which in the case of this RTX 3080 is 52.8MH/s which is comparable to a desktop RTX 3070.

Running that 155W GPU at full speed 24/7 to mine cryptocurrencies is probably not a great idea, as there’s going to be a lot of heat involved and those little fans are going to be working overtime. Still, at least we don’t have to hear the whine of the machine for its month of misery. Maybe it’ll be allowed to play some games at the end of it all; if it doesn’t die before then.

The reason the blog post is so surprising is because gamers can’t get their hands on graphics cards at the moment, and at least part of the blame for this situation can be laid at the door of cryptocurrency mining. The blog even starts off by pointing this out but then doesn’t seem to comprehend why continuing with the ‘experiment’ implicitly supports it. Maybe MSI just thinks they’ll sell more laptops?