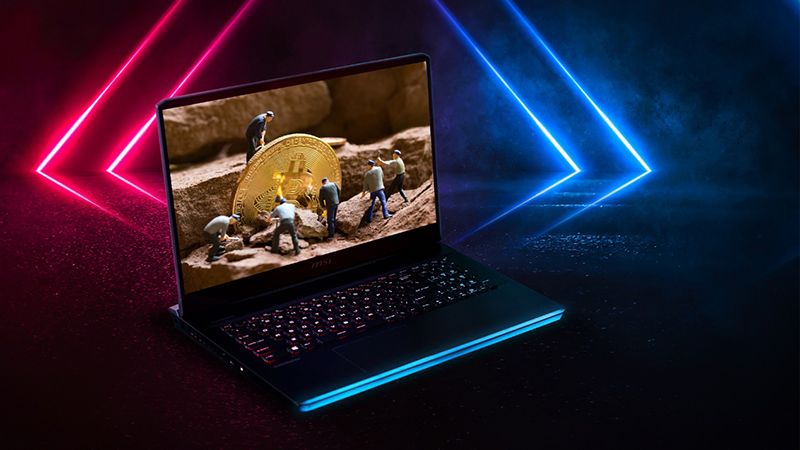 MSI has deleted a two week old blog post on their site demonstrating the mining performance of their latest MSI GE76 Raider gaming laptop with a mobile RTX 3080 GPU, presumably to avoid the wrath of gamers struggling to get their hands on the hard-to-find Nvidia GPUs.

Helpfully flagged by TechPowerUp, the now-deleted post – which you can read here courtesy of the Internet Archive’s Wayback Machine – explains that the company was conducting a month-long test to see how much Bitcoin its latest gaming laptop could generate.

The post, dated February 25, is a legitimate examination of a gaming laptop’s efficiency at mining cryptocurrency and isn’t a pointless exercise – it’s actually quite informative and does an excellent job explaining what costs are associated with cryptomining, how it’s done, how profit is determined, and how GPU mining performance is calculated – namely something known as its hashrate.

We have reached out to MSI for comment and will update this story when we heard from the company.

How cryptomining is swamping the GPU conversation, rightly or wrongly

With the prices of Bitcoin and Ethereum continuing to climb, mining the valuable cryptocurrency has become very much in vogue these days – even if hopes for breaking even at this point are very slim. Still, people can’t help but get swept up in a gold rush, and that can make buying a shovel for work around the house a frustrating challenge.

Nvidia said in its most recent earnings call that it wanted to see more graphics cards get into the hands of gamers and have taken steps to limit the hashrate of the RTX 3060 and are rumored to be looking at doing the same for the upcoming RTX 3080 Ti. It looks like some cryptominers in Asia have already found limited workarounds to mine some cryptocurrency on the RTX 3060 and with RTX 3000-series laptops being bought up in bulk for cryptomining, tempers are running hot among gamers who are getting locked out of buying the next-gen graphics cards.

How much of the problem is attributable to cryptomining is still an open question, however. Nvidia estimates that cryptomining accounted for between $100 million and $300 million in Q4 revenue, which isn’t a whole lot when compared to overall gaming revenue of $2.5 billion – the vast majority of which came from graphics cards.

Even their upcoming cryptomining processors, a dedicated solution to cryptominers diverting graphics cards meant for gaming to mining Ethereum and other currencies, are only expected to bring in $50 million to $100 million in revenue next quarter.

The main culprits to the lack of graphics card stock, ultimately, are the gamers themselves. Demand for these cards is enormous, even more than with last gens Turing cards which had a much higher price point, relatively speaking. Being cooped up inside all year definitely hasn’t helped things, so as the demand for these cards far outpaces available supply, tempers are bound to flare.

Cryptominers are very visible targets for that anger, even if they make up only a small part of the problem, and even a hint that a manufacturer might be supportive of cryptominers using their products is met with a wall of rage online. So, if we’re being charitable – which we are – it’s little wonder then that MSI decided that maybe now wasn’t the right time to publicize any technical exercises involving their latest RTX 3080 laptop and Bitcoin.