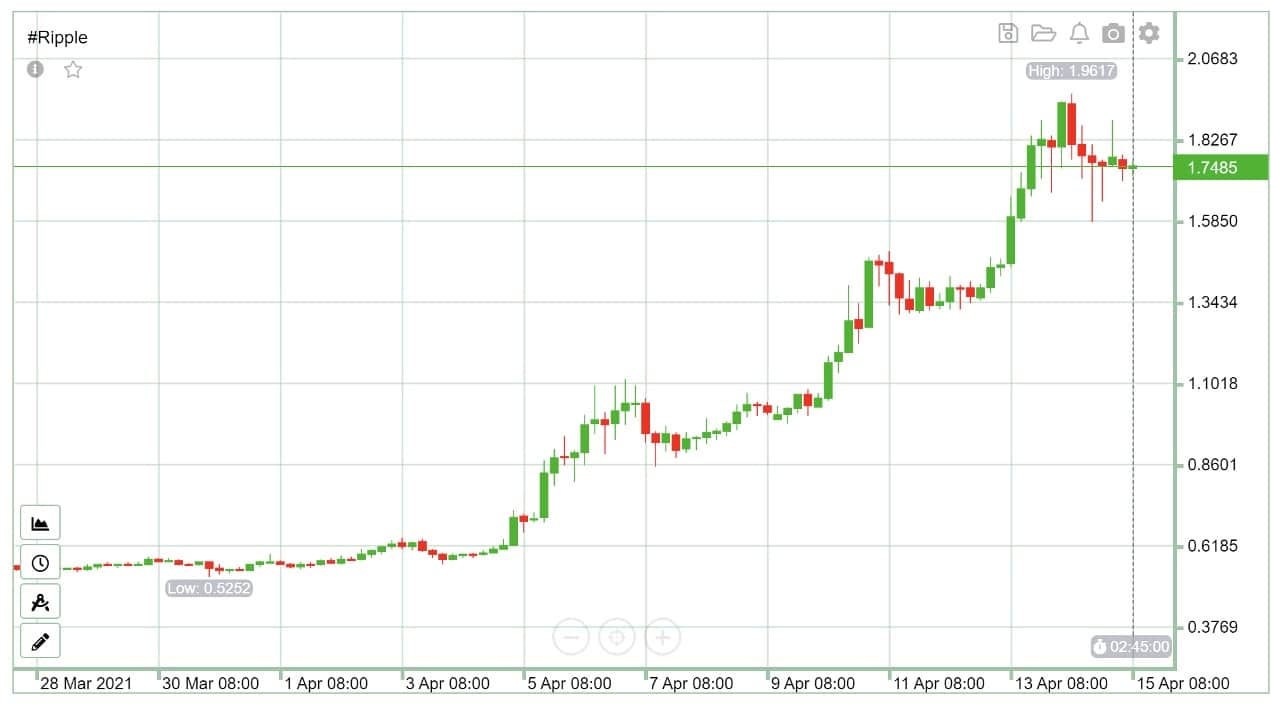 During the recent two weeks, Ripple soared by almost 300%. This might be comparable to the significant moves in other cryptocurrencies but, what many people may fail to realize, it is very unusual for a cryptocurrency that has the level of capitalization that Ripple has.

By way of comparison, the recent favorite of social media and Elon Musk – Doge Coin – soared less than 200% during the same period before 16 April 2021. However, the capitalization of Dogecoin is almost five times less than that of Ripple, which has recently crossed $80b and makes it the 4th biggest cryptocurrency in the world. Capitalization is important for cryptocurrencies in that, the more money there is in the cryptocurrency, the bigger number of sellers when its price gets too high, requiring, thus, more buyers to keep the price afloat.

What has caused unprecedented raise of Ripple?

As always in financial markets, news moves the price. During the past two weeks, since the end of March 2021, Ripple was benefiting from the flow of positive news from the legal field (its lawsuit with the SEC and the associated court rulings), which caused euphoria among investors, popping its prices to all-times highs with much bigger intensity than simultaneous moves in its peers such as Bitcoin or Ethereum which also reached new highs.

One might criticize this state of things in that, in the age of the Internet, news is often over-estimated and unfairly impacting prices, but that risk has always been the case even prior to influence from the Internet. Indeed, without the Internet informational flows would be more fragmented and vulnerable to manipulations.

It could however, be argued that the access to trading – again, thanks to the Internet – of a wider audience of less sophisticated traders and investors has contributed to this phenomenal rise of Ripple’s price (and of many other recent ones). This might be correct to a certain extent, let alone where the underlying price movement is driven by the news coming from a complicated legal topic that is far from being readily comprehensible even for those who have some expertise in crypto or finance.

This creates an environment where it is possible for everything that was achieved in the price rally to vanish rapidly. “Easy come, easy go” as they say.

What is the recent SEC lawsuit against Ripple Labs about?

In short, the SEC has argued that, at all material times since its inception, Ripple was not a cryptocurrency but a form of security that was ought to be registered with the regulators rather than being freely distributed just like Bitcoin or Ethereum.

This claim was bound by the SEC to the fact that, unlike Bitcoin and other altcoins, Ripple was pre-issued by the associated cryptocurrency company – Ripple Labs – whose main profits stem from the sales of XRP it has received, in effect, for free, as the creator of the cryptocurrency. Ripple Labs controls the vast majority of XRP’s supply, in a stark difference from any decentralized cryptocurrency.

This scheme is believed by the SEC to be akin to the scheme where commercial companies issue their shares that they sell for attracting investments. It was further argued by the SEC that most of what Ripple as a cryptocurrency can do was developed and / or underpinned by the work of Ripple Labs, which, again, supports the concept of XRP representing quasi-shares of Ripple Labs.

In its claim, the SEC alleges that all sales of Ripple during the last 8 years since Ripple’s inception were sales of a security rather than of a cryptocurrency.

What Ripple says in defense?

Brad Garlinghouse and Chris Larsen, the co-founders of Ripple and defendants along with Ripple Labs in SEC v Ripple lawsuit

The defense of Ripple Labs and its principals is that it did not and could not know that the sales operations Ripple Labs has been performing with XRP, all the way through the last 8 years, concerned a security that requires registration with the SEC. Significantly, Ripple Labs refers to several of the SEC’s own comments in the media on the same issue during the preceding years, that largely underpin the defense’s position.

Triggering big waves of euphoria in the crypto market, the court refused some applications of the SEC aimed at receiving further information from Ripple Labs through a court order and, to the contrary, has supported certain applications by Ripple Labs to the court for the information to be supplied by the SEC itself. This has created an impression that the river has started to run to the opposite direction: having initiated the litigation four months ago, it is now the SEC itself that is subject to Ripple Labs’ applications for information as if it were a defendant.

So, what is the bombshell of this investing rally?

Apparently, the recent moves are caused by the euphoria in the markets, which are populated by many people who have little understanding of intricacies of the legal matters and regulations. A good recent article in Forbes, that goes through SEC’s failures, shows what Ripple buyers read today when they make their investment decisions.

What many of them fail to realize is that SEC has already won, at the least, one similar case recently. Against TON – a cryptocurrency project of Telegram messenger, a rising competitor of WhatsApp, which had a plan to do something much alike to what Ripple Labs did: to pre-issue cryptocurrency and collect investments in fiat money against that.

The SEC has won that case, in effect, making the plans of Telegram and of its founder Mr Durov fall apart. A beautiful story of a trendy cryptocurrency that was circulating web for more than a year, having attracted more than $1b in private investments from a multitude of investors around the world, went to nowhere.

Where Telegram and Ripple Labs acted to gain investment – which, by itself, has nothing wrong in it, – Facebook’s similar crypto-currency project named Libra, was developed assuming a much lower appetite for investments and a bigger interest in widening the ecosystem of the company. Nevertheless, just like TON, it was similarly frustrated by regulators around the world, leading to, in effect, staying the project.

These failures clearly demonstrate that, in the modern world, it is insufficient to issue a cryptocurrency without deep examination of the legal side of the matter. What differentiates Bitcoin and altcoins from Ripple is that those are owned and run by no one but the community. Ripple Labs, in its defense, states that this would also be the case for Ripple if Ripple Labs had disappeared one day, but this misses the point that Ripple Labs will not just disappear – it will continue to benefit from selling Ripple, the vast majority of which it controlled at all materials times and continues to do, just like companies control which shares they want to issue.

Ripple Labs’ position as to its previously having a belief of XRP being or not being a security might gain sympathy from a reasonable observer. The true potential risk for buyers of XRP in this situation is that it does not change the legal fact as to whether is XRP a security or not. The only thing which can be affected by that previous knowledge Ripple now relies on in the court proceedings is the level of the consequences of the violation for the decision makers and the company in terms of regulatory sanctions (if any) but not in terms of how XRP is to be categorized in future.

That is: if XRP is a security then it is a security. What matters is not what Ripple Labs’ principals or SEC’s staff were thinking and / or saying before; what matters is what the true position is now that the question has been asked for the future operations, just like it was asked for TON and Libra before it.

Hence, the ultimate question is whether is XRP a security or is it not. If it is, the legal bombshell that investors fail to realize is that Ripple / XRP would need to be delisted from all US cryptocurrency exchanges overnight, just like, TON’s previous plans to go into open market that went into nowhere. Without support and interest of retail investors, XRP’s price is at a high risk of plummeting significantly, let alone after it has almost quadrupled its capitalization within the past few weeks in a move, never seen before for cryptocurrencies of such capitalization.

If XRP is found to be a security will it be the end of Ripple?

Just as one should be worried when one of the leading cryptocurrencies triples in its price within a matter of three weeks, it would be unfair to say that Ripple has no future, after 8 years of industrious work put into that project by its founders. It is inevitable that Ripple has a future. The question is how bright and whether is it fairly reflected by the current rally, in which XRP has gained more than $50b in capitalization in a matter of two weeks.

Even if eventually XRP is categorized by SEC as a security (which can, certainly, happen, as follows from its current position), it would still be available to be traded through other types of brokers, just like any other securities can. The headwind of losing many of the retail investments from crypto-enthusiasts could be mitigated by a meaningful and focused development of an image of a special cryptocurrency with a smack of commercial / corporate approach and professionalism.

Ripple being a cryptocurrency run by a commercial company does not make it worse, it makes it different: it will be more efficient for bringing up many projects than it could be in open cryptocurrency communities like Bitcoin or Ethereum; it will be less powerful in developing wider scale of products due to the lesser number of developers and points of interest. Much will depend on how Ripple will position itself in the possibly imminent new reality of XRP being a security if the court finds it to be such.

As things stand now, there is no decision of the court and it is possible that Ripple can be found to be not a security, at the end of the day. It should be, however, understood, that any investment into the price of XRP today in an assumption that the SEC will definitely lose its lawsuit might be a fatal mistake of over-optimism for XRP buyers, let alone, when made after triplication of its price within few weeks.