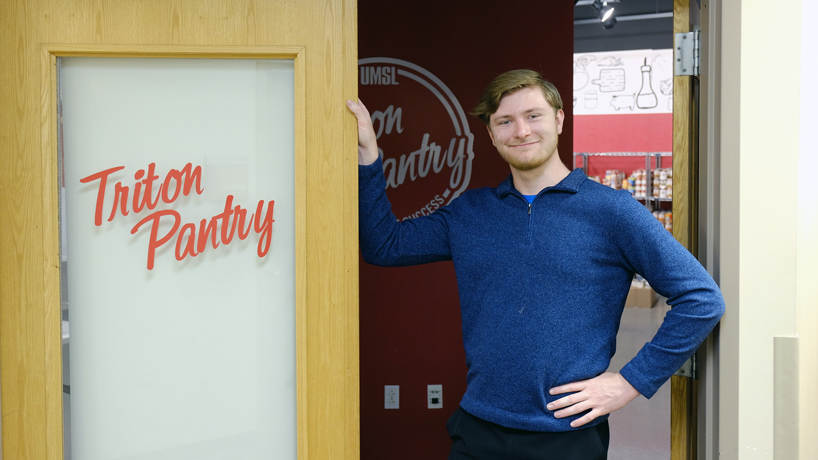 Kameron Ripple, a junior engineering major, volunteered at a Triton Pantry mobile market during his first semester at UMSL, which led to him becoming its first ever part-time employee. Volunteering with his grandfather inspired Ripple to get involved with the pantry. (Photos by August Jennewein)

Most days, from the ages of 10 to 14, Kameron Ripple would forgo the bus after school. Instead, he would catch a ride with his grandfather.

Ripple cherished the excursions, which brought the pair to a food pantry near his childhood home in Imperial, Missouri, to volunteer. As soon as he walked in the door, three older women at the pantry would greet Ripple warmly and hand him a list of items to start stocking on the shelves.

The experiences stocking the shelves and handing out food to those in need with his grandfather, Roger, made a lasting impact on Ripple. It’s what influenced him to volunteer at one of the Triton Pantry’s outdoor mobile markets during his first semester at the University of Missouri–St. Louis.

“I always have fond memories of that,” Ripple said of volunteering when he was younger. “Since then, my grandfather has passed, but I always have those memories near to me. That’s what inspired to me to eventually volunteer for the mobile pantry.”

An afternoon volunteering at a mobile market in 2019 led the junior engineering major to become the first ever part-time student employee at the Triton Pantry. Robin Kimberlin, director of Student Advocacy & Support, remembers the day well, recalling that everyone was impressed with Ripple’s enthusiasm for the work.

“He volunteered at this event, and he was smiley, friendly – just so engaged,” she said.

Though Ripple has a knack for service, he had been unsure of what he wanted to pursue in college. A high school teacher suggested engineering due to his aptitude for math, and Ripple applied for and was accepted to the UMSL/Washington University Joint Undergraduate Engineering Program.

Halfway through his first semester at UMSL, a campus email alerted Ripple to an upcoming mobile market. He decided to get involved even if he could only make it for the last shift of the day.

At the time, he viewed it as a one-off volunteer opportunity, not knowing that the Triton Pantry operated regularly on campus in addition to the mobile markets and other events. Kimberlin said the pantry happened to be hiring for its first paid part-time position shortly afterward, and she immediately thought of Ripple. “Someone reached out from the Triton Pantry, asking me if I’d be interested in a part-time position at the actual pantry,” Ripple said. “I thought, ‘I’ll check it out and see if it’s a good fit for me.’”

It was, and he was hired despite lacking some key information about the position.

“It was really funny because when I told him what he would be paid, he said, ‘Oh, I didn’t even know I was going to be paid. I thought I was going to volunteer the rest of the year,’” Kimberlin said with a laugh.

Ripple spends a couple days a week at the pantry, performing essential functions such as receiving products on delivery days, stocking shelves, filling students’ online orders and assisting walk-ins. He has now paved the way for another part-time employee, as well.

“I find it very fulfilling,” he said. “People come in all the time, and just to be able to help them a little bit anyway we can, it’s fulfilling. You can tell people are really touched by what we do. It really does help, and I love being able to do that. This is the way that I help the community. It may not be the biggest thing, but it’s what works for me.”

It’s a sentiment that echoes the memory of his grandfather.

“My grandfather was always a very charitable person,” Ripple said. “That’s one thing I always remember about him. He was going to help anyone that he could, whether it was convenient or not he would go out of his way. Even if he himself needed help, he always made sure it went both ways.”

If you are an UMSL student experiencing food insecurity or know another student that is, the Triton Pantry is here to support you: https://www.umsl.edu/studentadvocacy/triton-pantry/index.html