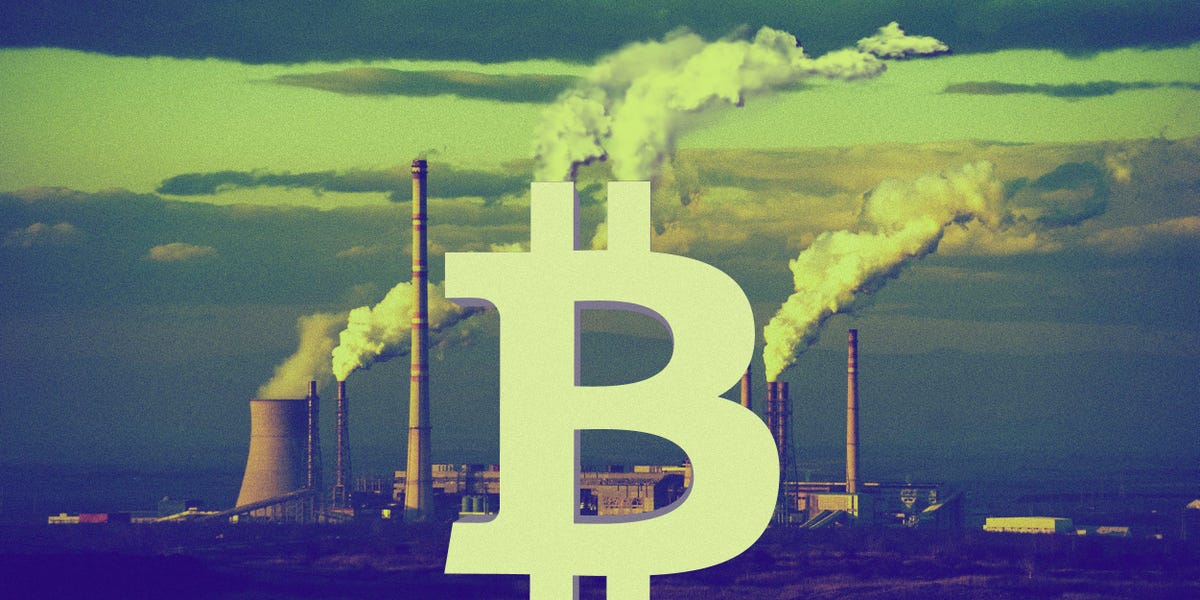 US investors are hungry for cryptocurrency, evidenced by bitcoin’s rapid rise to a market capitalization of more than $1 trillion and the crypto giant Coinbase’s recent initial public offering, which blew investors’ expectations away.

In addition, the US Securities and Exchange Commission is reviewing at least nine applications for the first domestic crypto exchange-traded fund.

As asset managers build new products to satisfy the growing demand for crypto, they could have to reckon with another trend popular among some investors — sustainability. Bitcoin notoriously consumes more energy than Argentina due to its onerous mining process, and its energy use is only going up, according to a study from Cambridge’s Centre for Alternative Finance.

Crypto’s environmental impacts have been a “stumbling block” for many investors, One River Asset Management’s head of sales Sebastian Bea told Insider.

The conflict has become a concern to institutional investors, who are interested in the asset class but have also pledged to be more socially conscious about where they’re putting their large sums of money. It’s not yet a major concern for the average retail investor, though it could become one in the next few years, sources told Insider.

The pressure on asset managers to clean up their act isn’t coming from just institutional investors, though. Many money managers have themselves adopted stricter environmental protocols. Eighty-seven firms representing $37 trillion dollars have joined the Net Zero Asset Managers Initiative, committing to support the goal of net zero greenhouse gas emissions by 2050 or sooner.

Insider talked to asset managers at firms like Invesco, VanEck, and Fidelity about how they were balancing their climate-friendly commitments with crypto investing opportunities.

Institutional investors such as endowments have expressed concern about crypto’s carbon emissions, even though they don’t comprise a significant portion of the overall crypto investor base, one person who works with asset managers to service crypto funds told Insider.

The person, who requested anonymity because they are not authorized to speak on behalf of their employer, said that their firm’s risk managers are worried about the issue as they believe in the next six to nine months sustainability will become a key concern for crypto investors as more and more institutions seek to invest.

Invesco and BlackRock have signed on to the Net Zero Asset Managers Initiative, and both have made recent forays into the crypto space.

Invesco does not offer any direct crypto exposure but does manage a global blockchain exchange-traded fund accounting for $1.2 billion in assets, a small proportion of which is invested in stocks exposed to crypto assets and crypto-mining operations.

Christopher Mellor, Invesco’s head of ETF equity and commodities product management for Europe, the Middle East, and Africa, told Insider in an email that the two mining operators to which the ETF is exposed use hydro and geothermal energy for their operations. Mellor also wrote that the energy mix for crypto miners overall is likely to shift away from high-carbon energy sources over time.

Of its net-zero commitment, Mellor wrote that offsetting its emissions is “part of an ongoing process, and the commitment is not at odds with continuing to provide investment solutions outside of the net-zero initiative as we continue to meet the needs of our clients.”

BlackRock, which manages $9 trillion in assets, has authorized two of its mutual funds to directly invest in cryptocurrencies. In April, CNBC reported, CEO Larry Fink said the firm had “made money on” crypto but that its institutional clients were not expressing broad interest in the asset class.

A spokesperson for BlackRock declined to comment on how it is balancing its commitment to sustainability with its crypto investments when Insider reached out.

Michael Hanus, a senior managing director at the alternative investments platform RealBlocks, said that asset managers are becoming more cognizant of the environmental concerns around crypto.

“A lot of managers, if you look at ESG, were originally focused on the ‘G,’ the governance aspects, in order to improve their portfolios. I think that’s shifting now, and there is additional emphasis on the ‘E’ and the ‘S’ of ESG,” Hanus said, referring to environmental, social and corporate governance.

Hanus, who has more than 30 years of experience working at traditional asset managers including Wellington and Fidelity, said asset managers can address the issue in two ways. The first, he said, is a financial means to dealing with crypto’s environmental damage, which involves buying carbon offsets or deploying cryptocurrency into ESG funds, a service that tech platforms like RealBlocks could provide.

One River Asset Management, a $2.5 billion hedge fund backed by Brevan Howard, is taking this approach by using offsets in its recently developed carbon-neutral crypto fund. The fund purchases carbon offsets to neutralize the estimated emissions from its crypto holdings. The firm plans to file for approval of a carbon-neutral crypto ETF with the SEC later this month.

Hanus contrasts this with what he calls the “technological approach” of using crypto mining to stabilize the power grid for renewable energy on an as-needed basis, which he says would encourage the adoption of renewable energy more broadly by driving down its cost.

Some firms say the issue is already being tackled

VanEck’s head of ETF product, Ed Lopez, told Insider that a lot of messaging around bitcoin’s energy consumption is misleading. He said bitcoin might consume less energy than other financial systems like gold or printing fiat currency, as research from Coindesk and others has suggested. VanEck is waiting for the SEC’s approval on a bitcoin ETF.

He also noted that energy use does not directly translate into carbon emissions and that many crypto miners already use renewables because of their lower cost, which push them to continue shifting away from fossil fuels. The shift, Lopez said, will encourage further investment in renewable energy as it becomes more stable, an argument supported by Cathie Wood’s Ark Invest, Jack Dorsey’s Square, and Elon Musk.

Fidelity, which plans to launch its own bitcoin fund, according to CNBC, is also bullish on crypto for its clients and, like VanEck, is not a member of the net-zero pledge. When asked for comment by Insider on Fidelity’s sustainability plans, a spokesperson for the firm shared a link to a blog post that argues that crypto mining could drive renewable energy adoption or use “stranded gas” that would not otherwise be consumed.

The Cambridge study found that while 76% of miners use renewable energy, only 39% of the overall energy used for crypto mining is renewable.

Just Capital, where Martin Whittaker has been CEO since inception, was created by billionaire hedge-fund investor (and bitcoin bull) Paul Tudor Jones in 2013. Just Capital seeks to evaluate corporations’ contributions to a more “just” society, as defined by its annual survey of Americans each year on the issues that matter to them.

Whittaker said that while those surveyed have not yet identified crypto as an area of concern, he expects its environmental impacts to gain prominence in the public psyche.

Whittaker said the authenticity of ESG efforts is a key concern for investors, particularly around carbon offsets, which critics say are not always efficient or permanent. He argued that investors need to assess that even though renewable energy offers a “net substantial benefit in terms of climate or carbon emission,” the additional resources needed to make those renewables viable must also be factored into the question of overall impact.

“Are they actually reducing emissions and helping us manage climate risk? If the answer is no, it’s just the label — it is greenwashing. That’s going to be a big problem,” Whittaker said.