Widespread selling consumed the cryptocurrency complex overnight, in many cases pushing the digital coins below long-held support levels. It was dramatic and a reminder to market operators about the perils of trading in the hot market with little or no attention to risk management.

Bitcoin price not fearing the reaper, despite bearish temptations

The working thesis has been for some time that BTC was poised to correct from a rising wedge pattern, and final support would lie near between $41,986 (January high) and $41,581 (38.2% Fibonacci retracement). Overnight, the flagship cryptocurrency dismantled the support at the intersection of the March low at $50,305 and the 100-day simple moving average (SMA) at $49,491 before bouncing from $47,500. The sell-off has driven the daily Relative Strength Index (RSI) near an oversold reading. A reading that was last reached on September 3, 2020. It was the momentum low for the decline, but not the price low. The price low occurred two days later.

Moving forward, the outlook remains with a bearish tilt. In the short-term, BTC should wrestle with the $50,305-$49,491 price range for a few days, releasing some of the selling compression before continuing the decline to potentially around $42,000, establishing the price low.

Considering the inherent volatility in the cryptocurrency space, speculators should also be prepared for a reversal in fortunes. A daily close above the March low at $50,305 is the first trigger, followed by the 50-day SMA at $56,816. Resistance will be strong between the moving average and the lower trend line of the rising wedge at $59,742. Any other price projections would need to be evaluated when BTC is above $59,742 on a daily closing basis.

Ethereum price with a burning desire to be the complex leader

Overnight ETH was down over 14%, after a notable reversal from an all-time high printed the day earlier. However, the smart contracts token has rebounded strongly from the critical support at $2,041.42 again and is currently down only 2.8%.

In the ETH case, the bullish working thesis was it needed to hold the February 20 high at $2,041.42 on a daily closing basis. If today’s rebound holds or continues, it will signal that more weak holders have been cleaned from the ranks, thereby enhancing the probability of Ethereum price marching higher into the 161.8% extension of the April decline at $2,886. Considerable resistance emerges at the cluster of 261.8% extensions related to the 2018 bear market, the February decline, and the March decline. The range is from $3,252 to $3,587. 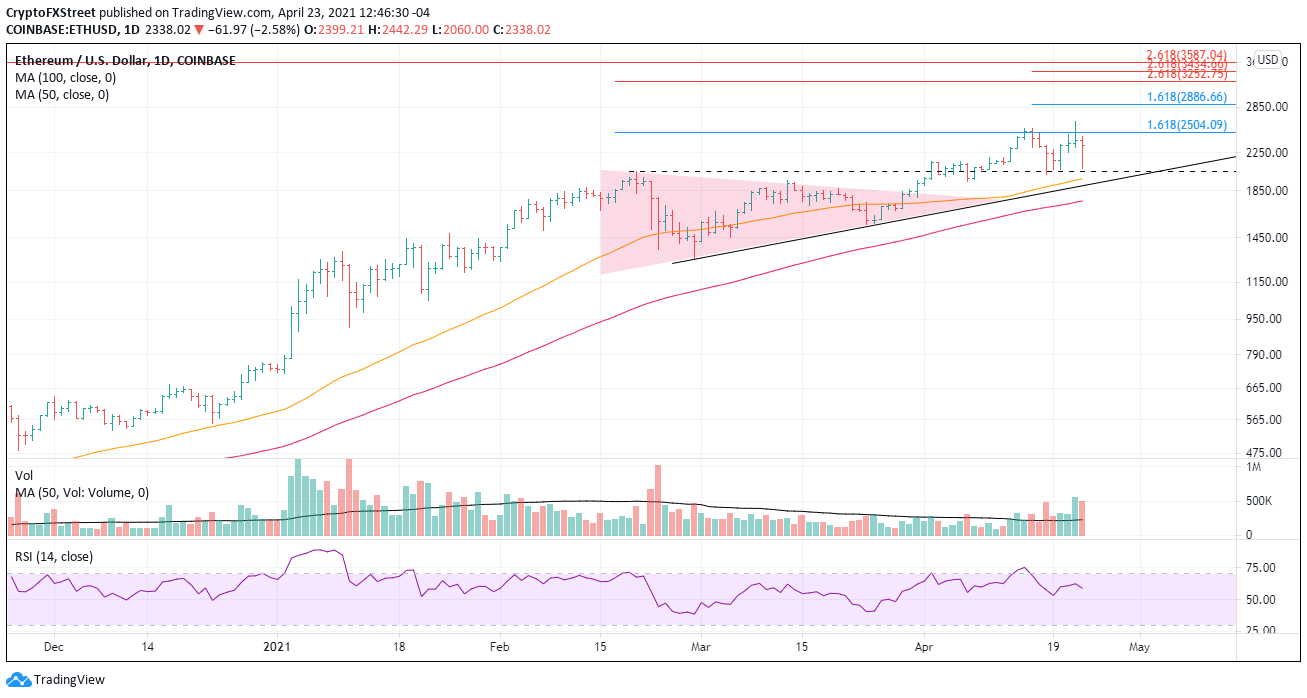 A daily close below the February 20 high would put ETH in the face of necessary support at the 50-day SMA at $1,966 and the rising trendline from the February low at $1,895. Just below is the 100-day SMA at $1,753. Any weakness below that level exposes the digital token to higher price uncertainty.

An April 21 FXStreet article projected that Ripple would decline a further 25% before marking a low. Overnight, XRP price fell to $0.874, a decline of over 24% before staging a substantial rebound to be currently down only 5%.

The decline, because it did not stick, at least not yet, failed to push the cross-border remittances token daily RSI reading to an oversold condition, opening the potential for some more weakness in the coming days or weeks. If selling does resume, it may test today’s low at $0.874. 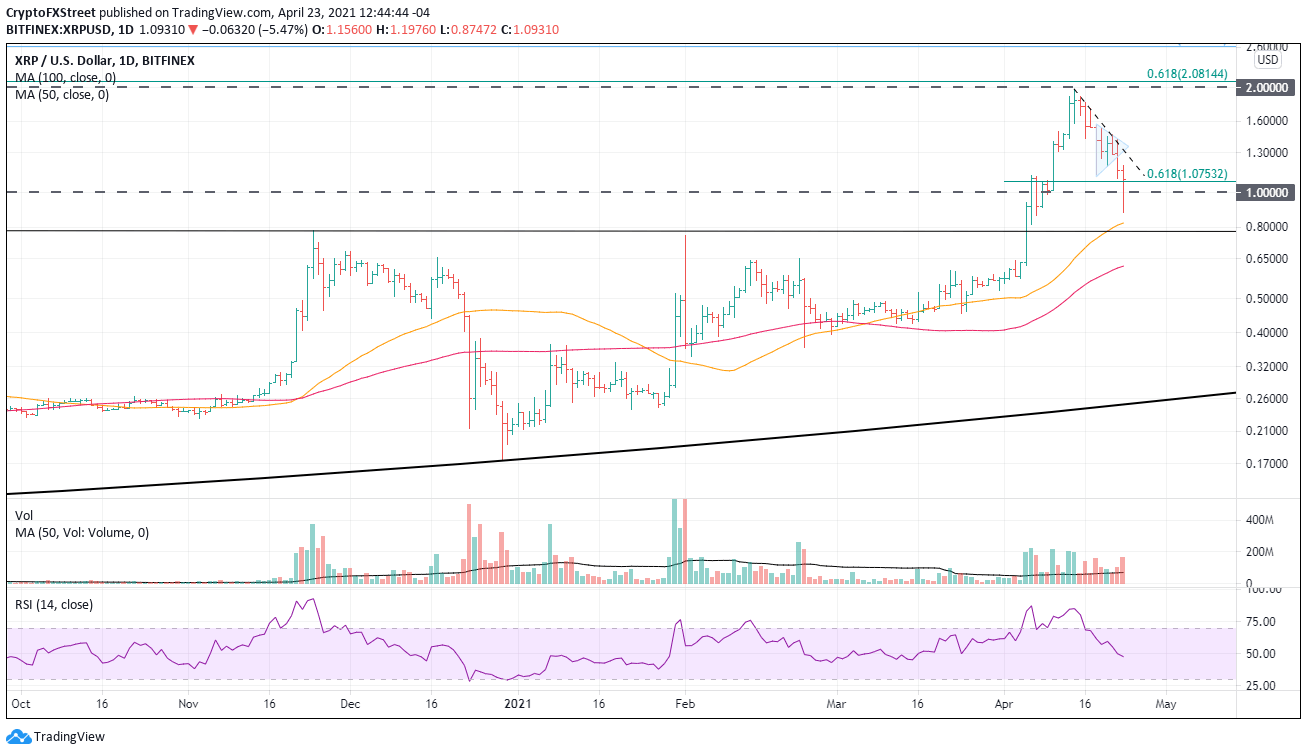 The path for Ripple is more complicated than some of the cryptocurrencies at the moment, but one resistance level is fundamental to the narrative; the declining trend line at $1.30. It is the arbitrator for deciding whether this is a dead-cat bounce or a renewal of a more significant rally to the all-time high at $3.30.

The crypto market was due for a correction, and many altcoins were flashing topping patterns last week, before the weekend mini-crash. Some emerging issues such as taxation will cloud the short-term outlook, but success for the rest of 2021 could rest on good selection, rather than just buying any cryptocurrency hoping to score big.