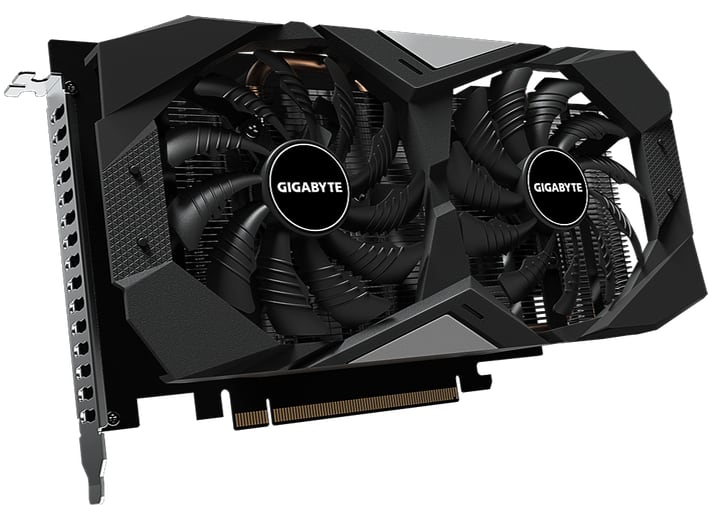 We got our first look at Gigabyte’s first NVIDIA CMP HX card back in early March when a single photo leaked. Today, Gigabyte is ready to get official with the cryptocurrency mining card, designated as the NVIDIA CMP 30HX D6 6G (GV-N30HXD6-6G).

As we had already surmised, the CMP 30HX D6 6G is based on NVIDIA’s Turing TU116-100 GPU. The GPU features 1408 CUDA cores, a boost clock of 1785MHz, and 6GB of 14 Gbps GDDR6 memory on a 192-bit memory bus. There are no video outputs on the card, and it features a WindForce 2X cooling system with counterrotating 90mm fan blades. There’s also a composite copper heat pipe to keep the GPU [relatively] cool.

Not surprisingly, given the stresses that these cards are put under to mine for Ethereum, Gigabyte only warranties the CMP 30HX D6 6G for three months. To put that in perspective, Gigabyte’s GeForce GTX 1660 Super Gaming OC 6G with a 3-year warranty. That’s a massive drop in warranty coverage, but that’s the price you must pay for ETH mining.

The CMP 30HX is the entry-level member of NVIDIA’s 4-SKU dedicated cryptocurrency mining family, with a specified hash rate of 26 MH/s. The most potent family member is the CMP 90HX, which is reportedly based on the GeForce RTX 3080 (Ampere) and has a hash rate of 86 MH/s.

We still don’t have any official U.S. pricing from Gigabyte for the CMP 30HX D6 6G, but the card has been spotted in Romania for 2,975 RON, which is $722. That’s an insane price to pay for this level of hardware, especially considering that the GeForce RTX 1660 Super launched at $229.