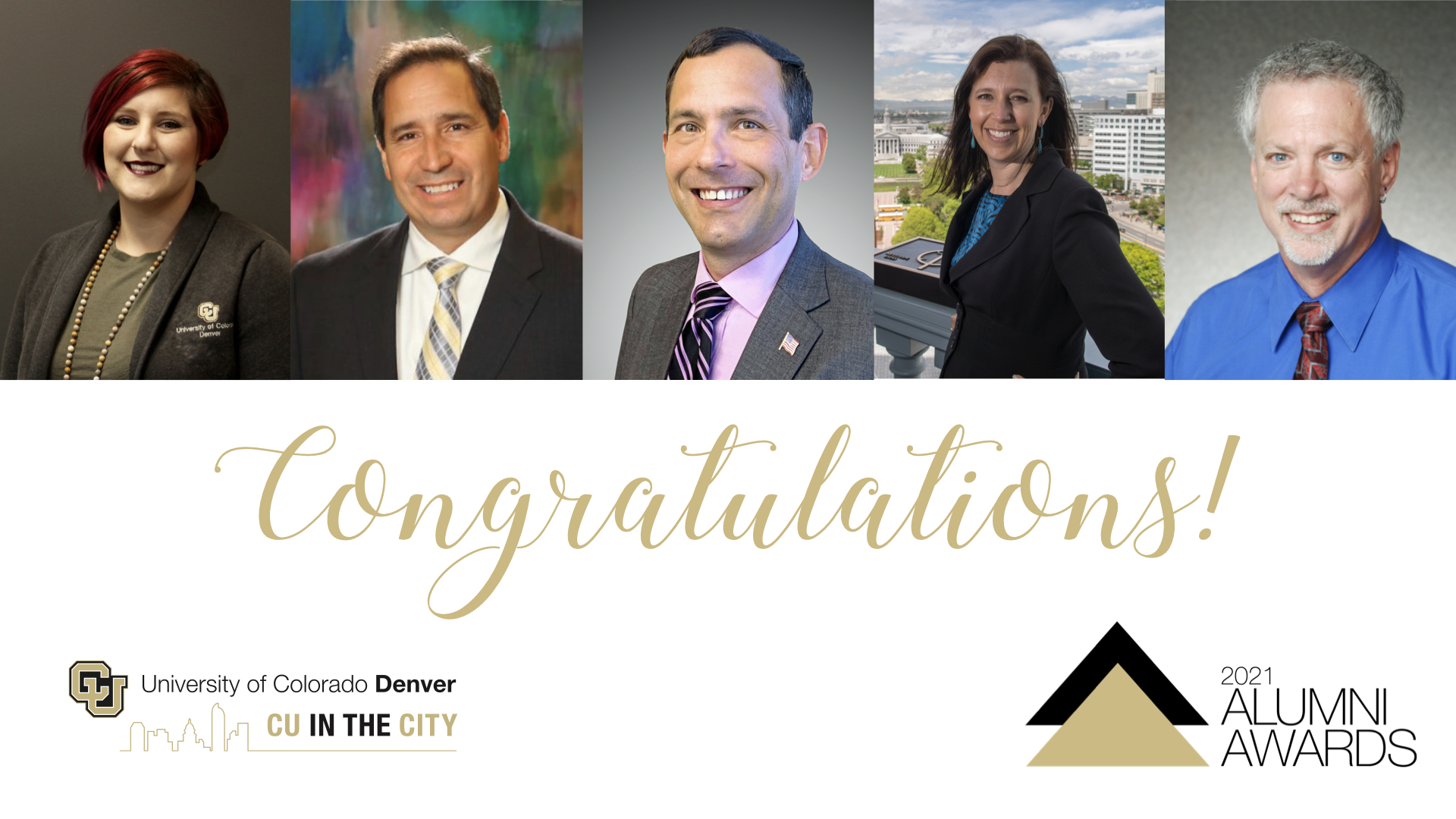 Over the past year, we have all had to get creative with how we stay connected and give back to our campus and our city. But even before the pandemic, the recipients of the 2021 CU Denver Alumni Awards set the bar in finding creative ways to support their community and honor their alma mater.

One awardee wrote a cookbook to show students how to eat healthy at home and on a budget. Another has donated blood plasma and platelets since the pandemic began. Another awardee (and we fact-checked this) chose names for both of her children so that their initials would be “C.U.”

For these reasons and many more, on May 12 the CU Denver Alumni Board honored five exceptional alumni whose contributions to their professions, their communities, and their university have set them apart. The virtual award celebration had the atmosphere of a family reunion, drawing more than 70 participants spanning thousands of miles, from Denver to Cape Canaveral, FL.

Chancellor Michelle Marks set the tone for the event in her remarks to the awardees. “You, more than anyone, demonstrate what a CU Denver education means as you make your mark on the world,” she said. “With every graduating class, this ripple effect expands—improving more lives, strengthening more communities, and increasing evermore our pride in the CU Denver family.”

The award ceremony was co-hosted by Alumni Board President David Heisler ’17 and incoming SGA President Nadia Crowley. It featured opening and closing performances by musician Chloe Tang ’18, which made clear to her fellow alumni just why her TikTok videos are racking up millions of plays.

Throughout the evening, each awardee offered their own take on what it means to be a Lynx and an Alumni Award recipient. In addition to the awardees’ live remarks, students and alumni from the College of Arts and Media produced prerecorded videos spotlighting the stories of all five recipients.

Keri Ungemah MS ’02, who was honored with the Alumni Award for Excellence, echoed the chancellor’s words. As she reflected on her role in helping found the CU Denver Business School Alumni Network, she said: “Chancellor Marks, I love the ‘ripple effect.’ That’s why I’ve done this.”

The ceremony culminated in the Board’s highest honor, the Mack Easton Distinguished Alumni Award, presented to Charlie Ferguson ’85, MS ’87, PhD. Two of Ferguson’s CU Denver professors, Teresa and Gerald Audesirk, shared early memories of their former-student-turned-colleague. “We first encountered Charlie as an uninspired student in our general biology class,” the wife recalled. “But in the years that followed, it was he who inspired us.” Her husband agreed: “Charlie helped transform the lives of literally thousands of students” through his teaching and mentorship.

Ferguson’s journey as a nontraditional student embodies the spirit of CU Denver, where people of every age and background come to transform their lives. As he closed his speech, Ferguson recalled the vision that Chancellor Marks shared for the future. “If there’s something I hope we never lose,” he said, “it’s that CU Denver is an institution of redemption. It’s an intuition of second chances.”

Since the first Alumni Award was presented to Iona Wakefield in 1979, the CU Denver Alumni Board has honored nearly 160 individuals with awards in categories ranging from the Alumni Advocacy Award to the Recent Alumni Award. Nominations can come from any member of the CU Denver community. This year, the Board selected five recipients from more than 30 nominees.

The Mack Easton Distinguished Alumni Award is the CU Denver Alumni Board’s highest honor. It is presented to an individual who has demonstrated a long-term commitment to serving CU Denver, its students, and alumni. The award was developed by the CU Denver Alumni community in memory of D. Mack Easton, the Dean of the “Denver Extension Center” in the early 1960’s. His vision paved the way for the extension to become the diverse and dynamic urban research university CU Denver is today.

CU Denver is proud to honor Professor Charlie Ferguson ’85, MS ’87, PhD with the Mack Easton Distinguished Alumni Award for his long-term commitment to CU, and especially its students. Charlie is a three-time CU degree holder having received his BS in biology and his MS in biological science from CU Denver’s College of Liberal Arts and Sciences before completing his PhD in ecology and evolutionary biology at CU Boulder. Charlie has been instrumental in the development of several K-12 pipeline programs, as well as post-baccalaureate programs designed to help students from disadvantaged backgrounds obtain a college education and pursue their dreams of entering the medical profession.

Charlie was a faculty member at CU Denver from 1985-2019, which included serving as director of the Health Careers Advising Center, the BA-BS/MD program, and the BS/DDS UCD/Kuwait cooperative programs at CU Denver, and chairing the Health Careers Advisory Committee, all of which he helped develop. Charlie’s past honors include Carnegie Foundation Professor of the Year for Colorado, CU System’s Thomas Jefferson Scholar, CU Faculty Feminist of the Year by the CU Women’s Resource Center, and two College of Liberal Arts and Sciences awards for Excellence in Teaching.

The Alumni Award for Excellence is presented to alumni who have excelled in their career field, served their community, and supported CU Denver.

CU Denver is proud to recognize Keri Ungemah MS ’02 with the Alumni Award for Excellence. Keri is a two-time CU degreed alumna having earner her BSBA in finance and international business at CU Boulder’s Leeds School of Business and her MS in marketing from the CU Denver Business School. Having served in marketing roles at CU Boulder, Keri is now Chief of Staff and Assistant Dean of Communications and Marketing at the University of Denver’s Sturm College of Law. Keri’s dedication to her alma mater is evident in her more than seven years of volunteering with CU Denver, including serving on the Alumni Board for more than six years and helping found the Business School Alumni Network (BSAN).

As a CU Denver Alumni Board member, Keri served in several leadership positions, including three years as board president. As a founding member for BSAN, Keri helped lay important groundwork for BSAN, including crafting its charter, budget, and strategic initiatives, and serving as the inaugural BSAN Chair. Keri’s pride for CU is so deep that each of her children’s initials are “CU.”

The Alumni Partner Appreciation award is given to alumni within organizations who have demonstrated a commitment to CU Denver and its mission through opportunities for current students and alumni.

CU Denver is proud to recognize Joe Rice MPA ’06 with the Alumni Partner Appreciation Award for his pivotal role in securing career pipeline opportunities for students at CU Denver to Lockheed Martin Space. Joe earned his BA in history from Metropolitan State University of Denver and his Master of Public Administration from CU Denver’s School of Public Affairs. He also earned a Master of Strategic Studies degree from the U.S. Army War College. Prior to joining Lockheed Martin Space as Director of Government Relations, Joe served as an Army Officer for more than 30 years including multiple deployments. He also served as Mayor of the City of Glendale, Colorado and as a two-term member of the Colorado State House of Representatives.

Joe has given back to his alma mater by volunteering with the Boots to Suits program, offering his time for informational interviews, and mentoring students, several of whom ultimately secured employment at Lockheed Martin Space. Joe’s commitment to the community is further evident in his volunteer service with Big Brothers, Dismas House, and on several boards related to space advocacy. His military awards and decorations include the Legion of Merit, two Bronze Stars, the Combat Action Badge, the Expert Infantryman’s Badge, and he is one of three recipients of the Thomas R. Hobson Aerospace Distinguished Service Award presented by the Aerospace States Association.

The Alumni Advocacy Award is presented to an individual that has championed the causes of higher education across the state of Colorado.

CU Denver honors Todd Cordrey MPA ‘10 with the Alumni Advocacy Award for his work in championing the importance of access to higher education across the state of Colorado. Todd is a soon-to-be a multiple CU degree holder, having earned his Master of Public Administration degree from CU Denver’s School of Public Affairs and currently pursuing his PhD in the Leadership for Education Equity program. He has also received a certificate in executive leadership and a licensure from CU Denver’s School of Education and Human Development.

Todd’s efforts in promoting higher education extend throughout his career, which included positions as a sixth-grade teacher, CU Denver faculty member, board president of Brighton Board of Education, and superintendent of the Rangely School District, a rural public school district in northwestern Colorado. He currently serves as executive director of the Early College of Arvada (ECA), a diverse urban charter school. In this role, Todd heads longstanding partnership between ECA and CU Denver with the CU SUCCEED program which provides low-income, first-generation college students with up to 60 college credits while in high school. His most recent commitment to the community is his regular habit of donating platelets and plasma since the onset of COVID-19.

The Recent Alumni Award is given to alumni who are within five years of graduation and are affecting positive change for the community.

CU Denver honors Monica C. Cutler MPA ’18 with the Recent Alumni Award. Following in her aunt’s footsteps (Beth Moyski MPA ’94), Monica received her MPA in nonprofit management and Certified Nonprofit Professional (CNP) credential from CU Denver’s School of Public Affairs. While pursuing her Master of Public Administration degree, Monica showed leadership promise by serving as president and co-president of the MPA Student Association from 2015-2018. In recognition of her academic achievements, she received the Outstanding MPA Student award and was inducted into Pi Alpha Alpha, the honor society for public affairs and administration students.

Monica joined the Office of Advancement at CU Denver in 2014 and rose to her current role as Assistant Director of Advancement Communications in 2017. In 2019, she received the McCord Award, with which the University of Colorado Foundation recognizes CU Advancement and Foundation employees who best exemplify creativity, entrepreneurship, integrity, collegiality, loyalty, and vision.Monica is an active alumna of the School of Public Affairs and was recently nominated by the School’s faculty and staff to serve on the newly formed SPA GOLD Board where she was elected to serve as vice-chair/secretary and is helping craft bylaws. She is an annual donor to the university and enjoys volunteering to write letters to admitted students encouraging them to attend CU Denver.