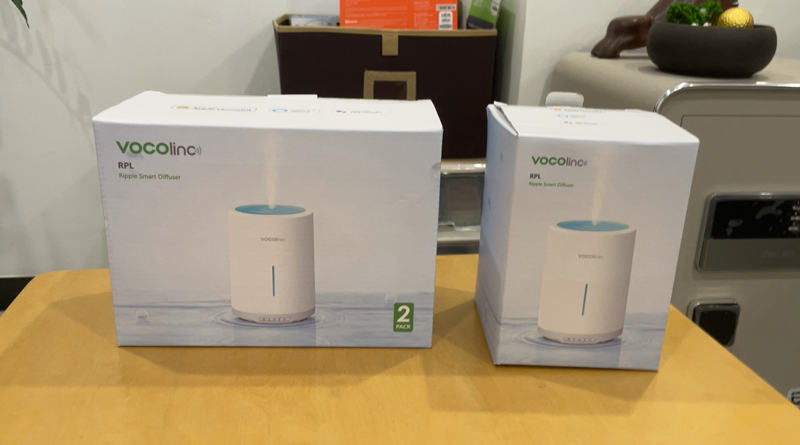 The dust has only just begun to settle on Vocolinc’s latest offering, the MistFlow Smart Humidifier (read our review HERE), but the smart home manufacturer hasn’t wasted any time, with the planned release of its smaller sibling, namely the Ripple Smart Diffuser (model RPL).

The new product was actually first spotted on the banner for Vocolinc’s Amazon store although the Ripple isn’t listed as such. Like the company’s original product, the Flowerbud, the Ripple is primarily an aroma diffuser, although it’s capable of humidifying to a certain degree.

It does, however, take on some of the stylings of the previously mentioned MistFlow, with a cylindrical shape, and exit vent for the diffused water to escape, surrounded by a ‘water ripple’ pattern. The Ripple will also come with a mood light, as is the case with the MistFlow and Flowerbud, which can be seen in the image on the third image above, as well as the packaging below, represented in blue. The Ripple, as with nearly all Vocolinc products, will work with the three main smart home ecosystems – Apple HomeKit, Amazon Alexa, and Google Home.

However, as well as similarities, there are a few differences between the Ripple and the other two products; The Ripple has a much smaller tank, given that it’s primarily a diffuser meant to be used in small bursts, and so comes with a 220ml tank, which is actually even smaller than the Flowerbud which comes with a 300ml tank, although if the Amazon store image is anything to go by, the Ripple is smaller in both height and width than the Flowerbud. We’re told that the Ripple has the same power output as the Flowerbud. The Ripple also comes with three buttons, to the Flowerbud’s two, so based on the functions of the Mistflow, we’re going to hazard a guess that the first one is a simple on/off control, the second is a timer, and the third is to control the mood light.

The other difference is the price. Vocolinc, who kindly supplied the image above, state that the Ripple is designed for those on a budget, with a single pack coming in at around U$29.99. We weren’t told what the price would be for a 2-pack, but we’re going to guess it’ll be a bit cheaper than buying two single devices.

We’re not privy to when these will come to Amazon stores etc, but given the packaging seems to be ready, along with the product making its unofficial debut on the Amazon online store, it can’t be too far off.