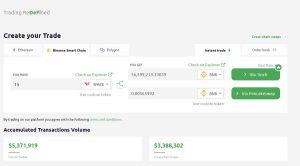 The text below is an advertorial article that was not written by Cryptonews.com journalists.

The Rubic Platform is a multichain DeFi ecosystem that offers a number of services, including instant, P2P, and cross-chain swaps across three different blockchains — Ethereum, Polygon, and Binance Smart Chain (BSC).

The platform recently took to Twitter to announce its latest development, which is the listing of a very popular, rising project called farm.space (SPACE). With the listing, SPACE can now be traded and swapped directly on Rubic, according to the announcement.

Farm.space is a project that wishes to further boost rewards for crypto users by bringing dual farming rewards through activities such as lending, margin trading, yield farming, and more. Its current goal is to make this possible on Binance Smart Chain — a second blockchain belonging to the world’s largest crypto exchange by trading volume, Binance.

The Rubic Platform allows users to choose which chain they wish to use on the spot, and so choosing Binance Smart Chain may be quite beneficial as opposed to choosing Ethereum, which currently still suffers from high gas fees due to its well-known scalability issues.

Interestingly enough, the move did not seem to have an effect on the SPACE price as of yet, which has been consistently dropping since the beginning of April. In fact, the coin, which launched in the second half of March of this year, reached its ATH of 5.18 USD on March 25th, From there on, it saw massive amounts of volatility that saw its price fluctuate rather violently, multiple times per day.

For example, the token went from the mentioned ATH to 0.0075 USD in little more than an hour, only to return to the previous high. The fluctuations continued for about three days, between March 26th and March 29th, after which it finally stabilized, relatively speaking. The rapid fluctuations stopped at around 1.4 USD, after which the coin dropped to 0.57 USD. This was followed by another growth to 1.2 USD, only to drop again to 0.74 USD. It then surged to 1.2 USD again late on March 31st, and since then, it has been spiraling down. In the last 24 hours alone, the coin dropped by 18.66%, currency trading at 0.3491 USD.

As mentioned, Rubic is a multichain DeFi ecosystem that allows users to trade coins by using several blockchains. Apart from SPACE, it recently listed a variety of new tokens, and its recent Medium post insisted that new tokens are, and will continue to be added every day. The platform’s goal is to bring as many of these tokens as possible, and make trading them as convenient as possible for its users.

Rubic is all about creating the best experience for blockchain users, and it believes that it needs to offer the ability to complete trades with every token in order to achieve such a goal. It recently created a cross-chain bridge RBC-BRBC, and it integrated Pancake to trade all BSC tokens available on the protocol, including the mentioned BRBC.

Farm.space (SPACE) is a new project that plans to increase user rewards for various activities, thus making it more profitable to participate in such activities, and at the same time, the promise of extra funds can help drive adoption, as well.

The project was listed on a multichain DeFi ecosystem, Rubic Platform. The platform works on several blockchains simultaneously, allowing users to select which chain to use for any individual transaction. With the listing of SPACE, the project has finally managed to fulfill its goal of getting to Binance Smart Chain through Rubic.

Terra Classic spiked 17.63% in last 24-hour; reason might comfort you

Here’s What’s Next for XRP, Binance Coin, Cosmos and One Low-Cap Altcoin, According to Popular Analyst – Coin-News24.com