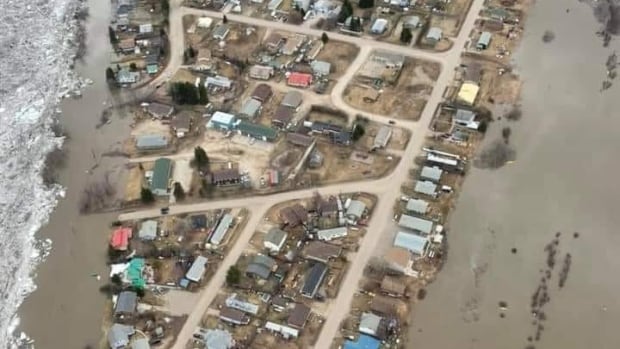 Flooding in Fort Simpson, N.W.T., is having ripple effects across the Dehcho region as communities who rely on the town for services like banking, mail and groceries are forced to look elsewhere.

More than half of Fort Simpson residents were displaced earlier this month after floodwaters swelled to record levels, enveloping parts of the town, flooding homes and tipping over fuel tanks.

The town is a hub for the Dehcho, offering services that are not available in other communities in the region, like Nahanni Butte, N.W.T.

The chief of Nahɂą Dehé Dene Band in Nahanni Butte says roughly 90 residents who typically make the two-and-a-half hour trip to Fort Simpson to do their banking or grocery shop have to travel twice as long to Hay River, N.W.T., or even longer to get to Yellowknife.

“It’s had quite an impact on the community here,” Chief Steve Vital said. “It’s quite costly on the gas.”

In order to help, Vital said the town used some COVID-19 funding to order about five tonnes of groceries which arrived in the community last week.

“Especially with the [COVID-19] outbreak in Yellowknife there, we didn’t want to have our members going over there to do shopping,” he said.

The flooding in Fort Simpson has also created challenges with receiving mail. Nahanni Butte usually gets a once-a-week delivery.

It’s been two weeks since its last one, and Vital expects it will be some time before it returns.

CBC reached out to Canada Post to see when mail services would return but did not receive a response by publication time.

As a result of the delay, Vital said trying to get insurance for his personal vehicle is “completely out of the question.”

“It’s quite complicated. We don’t have a postal code here and the only one we have is in [Fort] Simpson.”

Vital reached out to the chiefs of Fort Simpson and Jean Marie River to see if his community can support them in any way.

“We’re here for support if you need it,” he said.

He said his community is preparing for its flooding season, usually in June, caused by the summer melt from the surrounding mountains.

Nahanni Butte has its own experiences with devastating flooding. The entire community was nearly submerged in 2012.

“Everything was covered in silt and dust and dirt, everything,” Vital recalled. “It was a costly thing.”