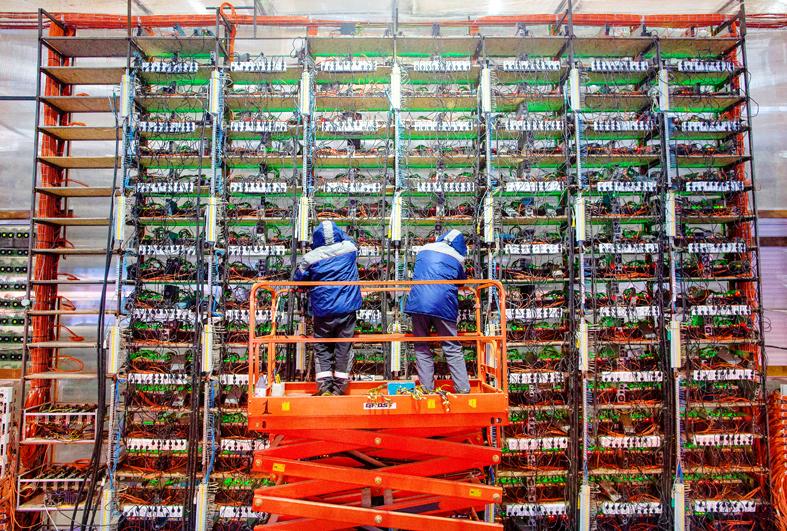 ‘SPECULATIVE MANIA’:
China vowed to crack down on the country’s cryptominers, triggering a sell-off, which led to a broader decline as investors cut their holdings

Cryptocurrencies yesterday fought to find a footing after even weekend cheerleading from Tesla Inc chief executive Elon Musk seemed unable to offset selling pressure from spooked investors or nerves stemming from a gathering crackdown on the asset class in China.

Musk had lent a bid on Saturday by tweeting support for crypto in “the true battle” with fiat currencies.

However, on Sunday prices slumped as “miners,” who mint crypto by verifying transactions, halted Chinese operations in the face of increasing scrutiny from authorities.

Bitcoin climbed as high as US$35,970 from Sunday’s trough at US$31,107, but the growing sense of a shakeout flowing through the frothy market left it struggling to make further gains and it remains about 45 percent below last month’s record peak of US$64.895.

The collapse leaves the world’s biggest cryptocurrency back where it traded in February, before Tesla announced a US$1.5 billion bitcoin purchase and made a since-reversed decision to accept it as payment for vehicles.

Rival cryptocurrency ether hit an almost two-month low of about US$1,730 on Sunday and bounced as high as US$2,101 yesterday before losing some steam.

Dogecoin, launched as a parody before Musk’s backing vaulted it up more than a 100-fold this year, last traded at US$0.30.

“After a brief bounce off last week’s multimonth lows, some of the paper-handed types have seemingly sold out,” IG Markets analyst Kyle Rodda said, using the market term for short-term holders who sell at the first signs of trouble.

“Or [they] decided to pack it in and cut their losses,” he said, “as bitcoin’s momentum, and the speculative mania that drove it, almost entirely disappears.”

The trigger for the initial crypto sell-off appeared to come from toughening language from Chinese regulators last week, which stepped up further on Friday when a Chinese State Council committee vowed to crack down on miners in particular.

Gravity has also played a role after months of gains and the attention on Chinese miners — who account for about 70 percent of supply — has further dampened sentiment.

“Many miners keep much of the bitcoin/ETH etc that they mine and don’t hedge it all into fiat right away,” said James Quinn, managing partner at Q9 Capital, a Hong Kong-based cryptocurrency private wealth manager. “If they are pulling up stakes or shutting down, they may need to reduce their balance sheets in the short term.”