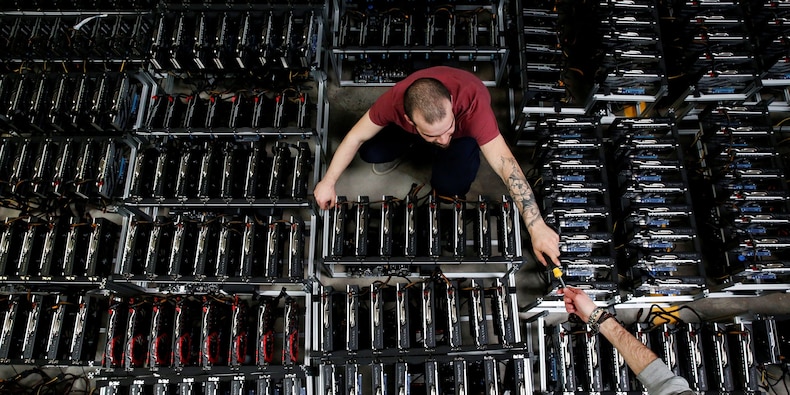 Shares of the largest public cryptocurrency-mining companies have outperformed bitcoin in the past 12 months and could continue to do so as bitcoin and the wider cryptocurrency market represent the “modern-age digital gold rush,” Fundstrat’s Leeor Shimron said.

In a recent note, Shimron, the vice president of digital asset strategy, said the purest way to gain exposure to bitcoin mining was to invest directly in mining farms, like Riot Blockchain, Hive Blockchain, Marathon Digital Holdings, and Hut 8.

“Over the past year, they greatly outperformed Bitcoin, which accelerated when the $20,000 all-time high was breached,” Shimron said. “We expect this dynamic to continue as the bull market plays out.”

Riot Blockchain, for example, has gained roughly 8,000% over the past year, while bitcoin has rallied about 525%.

Shimron also said the mining companies had taken steps to capture the growth of the bitcoin bull run, such as investing in efficient hardware and upgrading machines to increase operating leverage and hashrate capacity.

However, investors should be aware that buying shares of mining companies may be risky, with massive upside potential but also the potential for magnified losses during bitcoin’s bear markets.

“Although there is not enough historical data to confirm, mining company equities may serve as a high-beta play on Bitcoin,” Shimron said. “This would magnify performance to the upside and downside for these types of stocks. Clearly their performance is tied to the price of Bitcoin, but they may deliver amplified returns during a bull market. We are seeing this play out in the current market cycle. When Bitcoin enters a bear cycle, we would expect mining equities to have greater downside volatility than Bitcoin.”