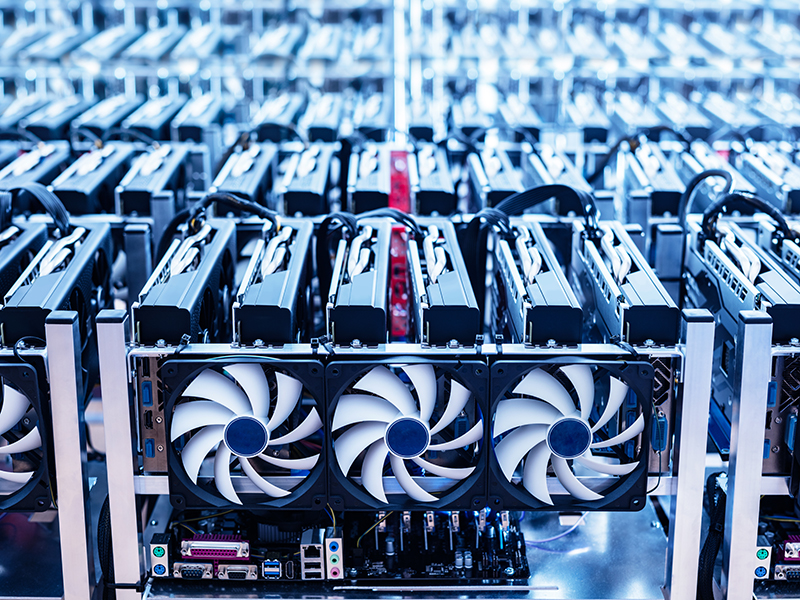 The rising energy usage of blockchains has recently been facing increasing public scrutiny. Most recently, Tesla CEO Elon Musk announced that the company would suspend vehicle purchases using Bitcoin and only resume once mining
shifts to more sustainable energy sources while Tesla studies other, more efficient, cryptocurrencies. Interestingly, the recipient of the first-ever Bitcoin transaction, computer scientist Hal Finney, first raised the issue of how to reduce CO2
emissions from potential widespread Bitcoin adoption back in January 2009, only three months after the Bitcoin
whitepaper was first published. Public, permissionless blockchains, such as Bitcoin and Ethereum, the largest and second-largest blockchains by market cap, rely on proof of work1 (PoW) to process transactions and provide network security.

Essentially, miners race to solve incredibly complex math problems using specialised equipment. This consumes considerable amounts of electrical power. Over the past few years, as the prices of Bitcoin (BTC) and Ether (ETH), the native tokens of the Bitcoin and Ethereum blockchains, have risen, more and more miners have joined the fray and engaged in a sort of arms race to increase their hash power2. Cambridge’s Centre for Alternative Finance estimates the Bitcoin network’s current annualised electricity consumption totals about 145 TWh3 4, distributed among all miners globally, accounting for about 0.65% of total global electricity consumption5.

This would rank it in the top 30 electricity consumers worldwide if it were a country. Globally, miners in China account for about 71% of current global hash power, with the United States and Russia accounting for about 7% each.6

Other estimates put the Bitcoin network’s annualised estimated electricity consumption much lower, closer to 75 TWh7. This disparity shows the uncertainty in the estimations and the need for more standardised methodologies and data to properly estimate energy consumption from cryptocurrency mining. Extrapolating current energy use and carbon emissions of PoW blockchain mining is notoriously difficult and estimates vary widely. Forecasts require several difficult assumptions, including the future price of a token (as well as network fees), network hash rate, mining location distribution, and the future energy mix of those miners/locations. Technological innovation in the space is also leading to increased efficiencies, making future projections of energy use even more difficult.

Have you read?
IRENA: No successful global energy transition without innovation
How peer-to-peer electricity trading can benefit communities and grid management

A substantial share of all PoW mining is already being powered by renewables; however, the exact share is uncertain. According to Cambridge, on average 39% of proof-of-work mining is powered by renewable energy, primarily hydroelectric energy8. This is higher than the 25% global average of share of renewables in electricity generation in 20199. Other studies, such as the Bitcoin Mining Network report from CoinShares Research estimate the share of renewables in Bitcoin PoW mining to be as high as 74%10.

The main challenge in determining the share of renewables in Bitcoin mining, and PoW mining in general, is the variable nature of renewables. For example, in Sichuan Province, China, where a large share of mining takes place, the average power generation capacity during the wet season is three times that of the dry season. Because of these fluctuations in hydroelectricity generation, Bitcoin miners can only make use of cheap hydropower during certain periods of time11. With electricity as the main operational cost for miners, there is fierce competition to find the cheapest sources of power, making low-cost renewable electricity, which has declined sharply over the past decade, an attractive option. In fact, more than half of the renewable capacity added in 2019 achieved lower electricity costs than new coal, presenting an attractive opportunity for a sector highly reliant on low-cost electricity.

One argument made by proponents of PoW cryptocurrencies is that mining makes use of excess renewables generation, thereby reducing curtailment and helping to financially support renewable power development, the cheapest source of power in many parts of the world. While there is evidence of this, miners have largely relied on baseload power, supplied primarily by fossil fuels12. This does raise an interesting question, however: As the cost of renewables continues to fall, will PoW miners follow historical precedent, whereby energy-intensive commodities
were used to export energy (aluminium smelting in Iceland and more recently, strategically located data centres) from locations with abundant, underutilised electricity, and increasingly migrate to areas with ample renewables?

Several initiatives are trying to accelerate the shift to renewables. The Crypto Climate Accord, a partnership between Energy Web, Rocky Mountain Institute, and the Alliance for Innovative Regulation, is currently working to ensure the cryptocurrency industry shifts to 100% renewables by 2030. The high-level objectives of this accord are being finalised ahead of the United Nations’ COP 26 Climate Conference later this year. Twitter and Square CEO Jack Dorsey announced in December 2021 the launch of Square’s Bitcoin Clean Energy Investment Initiative, a $10 million fund to support companies that help drive the adoption of renewables within the Bitcoin ecosystem.

Despite the high energy needs of PoW blockchains like Bitcoin or Ethereum, newer consensus mechanisms, including proof-of-stake (PoS)13, which eliminate the need for mining, are being developed and implemented. Ethereum’s imminent shift from PoW to PoS is set to reduce the network’s energy demand by around 99%14.

Promising “Layer 2” solutions are also being built on top of the two largest chains, in order to reduce energy usage and
transaction fees for network participants by batching large volumes of Layer 2 transactions and only occasionally settling on Layer 1 to verify the validity of these transactions. In fact, several solutions built on top of the Ethereum blockchain already offer ways to drastically reduce energy use.

Immutable X is one such example which claims to make non-fungible tokens15 (NFTs) carbon neutral. Bitcoin developers are also working on something called the Lightning Network, a Layer 2 solution that would substantially reduce energy demand of the network by moving most transactions off the main blockchain. Many promising concepts are currently being tested and developed and seek to further reduce energy consumption of PoW blockchains in the near future.

Also worth mentioning are blockchains built specifically for energy sector use cases, such as the Energy Web Chain, which rely on Proof-of-Authority (PoA) for consensus as opposed to PoW, making it much more energy-efficient.

While shifting away from PoW to more energy-efficient means of consensus can drastically reduce carbon emissions, Bitcoin will remain a PoW chain for the foreseeable future. And while Ethereum is in the process of shifting to PoS, it will also remain an energy-intensive PoW chain for the next year or so16. As a result, strategies to integrate higher shares of renewables into energy-intensive PoW mining are needed.

Looking at similar sectors for insights may provide the key. Data centres, for example, also rely heavily on electricity to power their servers and cooling, and have made huge strides in recent years to increase their energy efficiency and increase the share of renewables in their power supply.

A few key strategies employed by data centres which may prove useful for PoW mining include, among others:

A recent study of data centres globally found that while their computing output jumped six-fold from 2010 to 2018, their energy consumption rose only 6%, and Google claims to have reduced the energy used for cooling at their data centres by 30% on average in 202017 by using machine learning technologies.

Given the vast energy usage of both data centres and PoW mining operations, as well as their digital nature, a significant opportunity exists to add to or adopt similar strategies taken by the former.

Although PoW mining isn’t going anywhere (for now), and its energy use may continue to grow, we are not doomed. Developments in this nascent industry are rapid, with many blockchain participants focused on reducing energy use through new means of achieving consensus and the innovative means of scaling discussed earlier. While PoW mining is by no means the largest consumer of electricity, due to its visibility it attracts a lot of attention to the carbon intensity of the power sector as a whole.

The added attention this space affords can be used as a catalyst to achieve a 100% share of renewables in the power sector, making cryptocurrency mining a potential accelerator, not a roadblock, of an energy transition centred around renewables. IRENA’s latest World Energy Transitions Outlook outlines a pathway towards total energy sector decarbonisation.

Sean Ratka is an Associate Programme Officer at IRENA. His scope of work includes the emerging role of power sector digitalisation, and particularly blockchain technology, as part of the ongoing sustainable energy transformation. Before joining IRENA, he worked on transboundary power trade with the Energy Division of the United Nations Economic and Social Commission for Asia and the Pacific (UNESCAP). Before this, he worked in solar PV market intelligence for OCI, one of South Korea’s largest private sector energy firms.

Francisco Boshell leads the work on Innovation for Renewable Energy Technologies at IRENA.
He focuses primarily on providing policy advice and guidance to countries regarding technology innovation, quality control and standardisation programmes for a successful deployment of renewables. Boshell analyses technology development strategies for a wider deployment of renewables in energy systems and has co-authored several reports on energy transition and energy technologies. His background is in Mechanical Engineering and he holds an MSc in Sustainable Energy Technology from the Eindhoven University of Technology, in the Netherlands.

1 Proof of work is a form of cryptographic zero-knowledge proof in which one party proves to others that a certain amount of computational effort has been expended for some purpose. Verifiers can subsequently confirm this expenditure with minimal effort on their part.
2 Hashrate refers to the total combined computational power that is being used to mine and process
3 https://cbeci.org/
4 As of May, 2021
5 https://cbeci.org/cbeci/comparisons
6 https://cbeci.org/mini ng_map
7 https://digiconomist.net/bitcoin-energy-consumption/
8 https://www.jbs.cam.ac.uk/wp-content/ uploads/2021/01/2021-ccaf-3rd-global-cryptoassetbenchmarking-
study.pdf
9 https://irena.org/-/media/Files/IRENA/Agency/Publication/2021/March/IRENA_World_Energy_Transitions_
Outlook_2021.pdf
10 https://coinshares.com/assets/resources/Research/ bitcoin-mining-network-june-2019-fidelity-foreword.pdf
11 https://digiconomist.net/bitcoin-energy-consumption/
12 https://digiconomist.net/bitcoin-energy-consumption/
13 Proof of stake (PoS) is a type of consensus mechanism by which a cryptocurrency blockchain network achieves distributed consensus not through mining, but via validating block transactions by simply staking tokens. Network security is provided by holders of a token, rather than miners.
14 https://consensys.net/blog/ethereum-2-0/proof-of-stakeis-coming-to-ethereum-sooner-than-we-think/
15 NFTs are special types of cryptographic tokens which represent a good or asset, covering a wide range of unique tangible and intangible items, including digital art.
16 https://consensys.net/blog/ethereum-2-0/proof-of-stakeis-coming-to-ethereum-sooner-than-we-think/
17 https://blog.google/around-the-globe/google-europe/data-centers-europe-green-economic-recovery/
18 Tesla announced in January it added 1.5 billion USD worth of Bitcoin to its balance sheet and began accepting Bitcoin as payment for vehicles on 24 March, 2021. The company announced on May 12 they would no longer accept BTC as payment for vehicles but would keep BTC on their balance sheet.
19 https://www.microstrategy.com/en/investor-relations/press/microstrategy-acquires-additional-19452-bitcoins-for-1-026-billion_02-24-2021
20 Visa announced on 29 March that it would allow payment settlements using the Ethereum blockchain while PayPal announced on 30 March it would begin letting all US customers pay at millions of online merchants using cryptocurrency