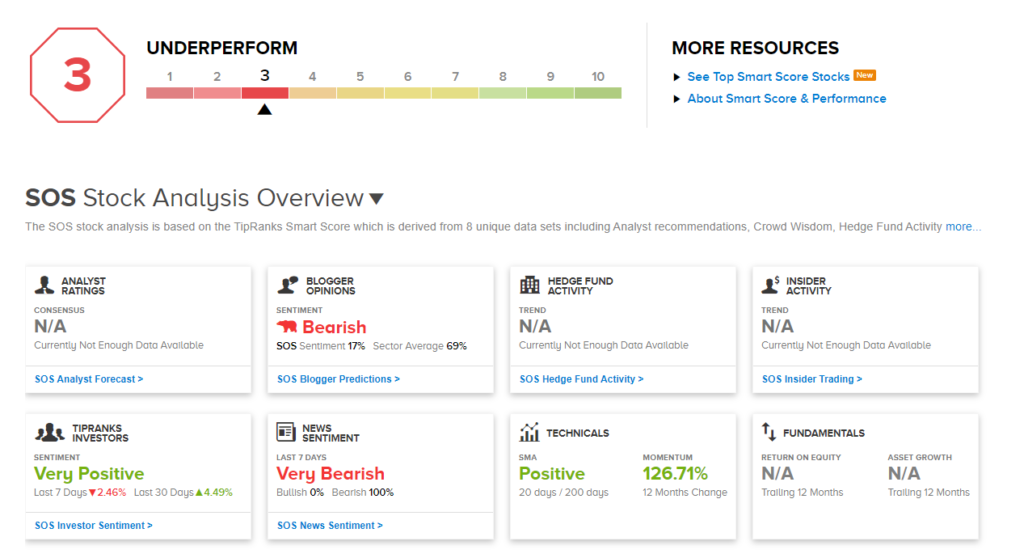 Cryptocurrency investing has continued to pick up steam as of late. Investors in cryptocurrencies, or in crypto miners for that matter, have had market-shattering returns. Accordingly, those reaching for growth in their portfolios have recently continued to pile into this trade in a big way.

There are some stocks that have not been trading in line with broader crypto sentiment. One such company is SOS Limited (SOS), a technology company that is engaged in crypto mining. Crypto mining means gaining cryptocurrencies by solving cryptographic equations through the use of computers.

This crypto mining play has sent investors on a wild ride this year. SOS opened the year around $1.44 per share, accelerating in parabolic fashion to nearly $16 per share, before settling down near the $3 level at the time of writing.

Now, any stock that can turn into a 10-bagger in just a few weeks deserves attention. Given the drop of nearly 80% from its peak, some investors may be considering picking up a few shares.

Let’s dive into whether or not that’s a good idea right now. (See SOS stock analysis on TipRanks)

The primary thesis for owning SOS right now is the company’s recently-announced transition into cryptocurrency mining.

SOS’s shift into crypto mining was announced only in early January. This company has been involved in a variety of businesses over the years, and appears to continue to shift into what’s hot. This lack of focus been a point of contention among bears. However, SOS bulls see the profit potential this shift to crypto mining brings, and want more of the action.

Recent large orders of thousands of crypto mining rigs further this sentiment among bulls. These rigs allow for both Bitcoin and Ethereum mining. Crypto bulls view this move as a smart one, as it diversifies the company’s revenue streams, in contrast with other concentrated mining operations that focus on mining a single cryptocurrency.

Additionally, in mid-April, SOS announced the acquisition of another 575 mining rigs. This specific order was dedicated to ETH (Ethereum) mining rigs. As explained above, SOS appears to be looking to cash in on whichever crypto option is hot. Right now, Ethereum is the red-hot place to be.

Furthermore, SOS has homed in on the ESG (environmental, social and government) concerns which have become rampant around cryptocurrency mining. Seeking to become more environmentally friendly, the company has secured a large contract with a local Chinese hydropower resource. Those bullish on crypto miners may point to this fact as a reason to own SOS stock. However, this move has not persuaded bears and short-sellers to join the party.

A prominent investment research firm with a focus on activist short-selling, Hindenburg Research, recently chimed in on SOS stock’s incredible rise. A significant decline in SOS stock can be linked to this report.

Earlier this year, Hindenburg released a short report that has absolutely devastated this stock. In addition to the allegations laid out by Hindenburg in its short report, the forensic financial research company spooked investors by releasing a series of tweets highlighting discrepancies in regulatory filings and alleging that SOS stock represents a shell game.

Since these reports were released, SOS stock has lost the majority of its gains from earlier this year. It appears bearish sentiment for Chinese stocks has helped these concerns generate validity among investors today.

According to TipRanks’ Smart Score analysis, SOS scores a 3 out of 10. That means the stock is likely to perform below market averages.

Right now, any sort of momentum for SOS stock is on the downside. Yes, cryptocurrency investing is the place many young investors searching for growth want to be. However, the risks associated with SOS stock are prominent today.

Whether or not SOS stock ultimately turns out to be a long-term profit machine, or a shell game with nefarious fundamentals, remains to be seen. However, given the anti-Chinese sentiment in the markets today, there’s reason to be careful with this one.

Disclosure: Chris MacDonald held no position in any of the stocks mentioned in this article at the time of publication.

Disclaimer: The information contained herein is for informational purposes only. Nothing in this article should be taken as a solicitation to purchase or sell securities.