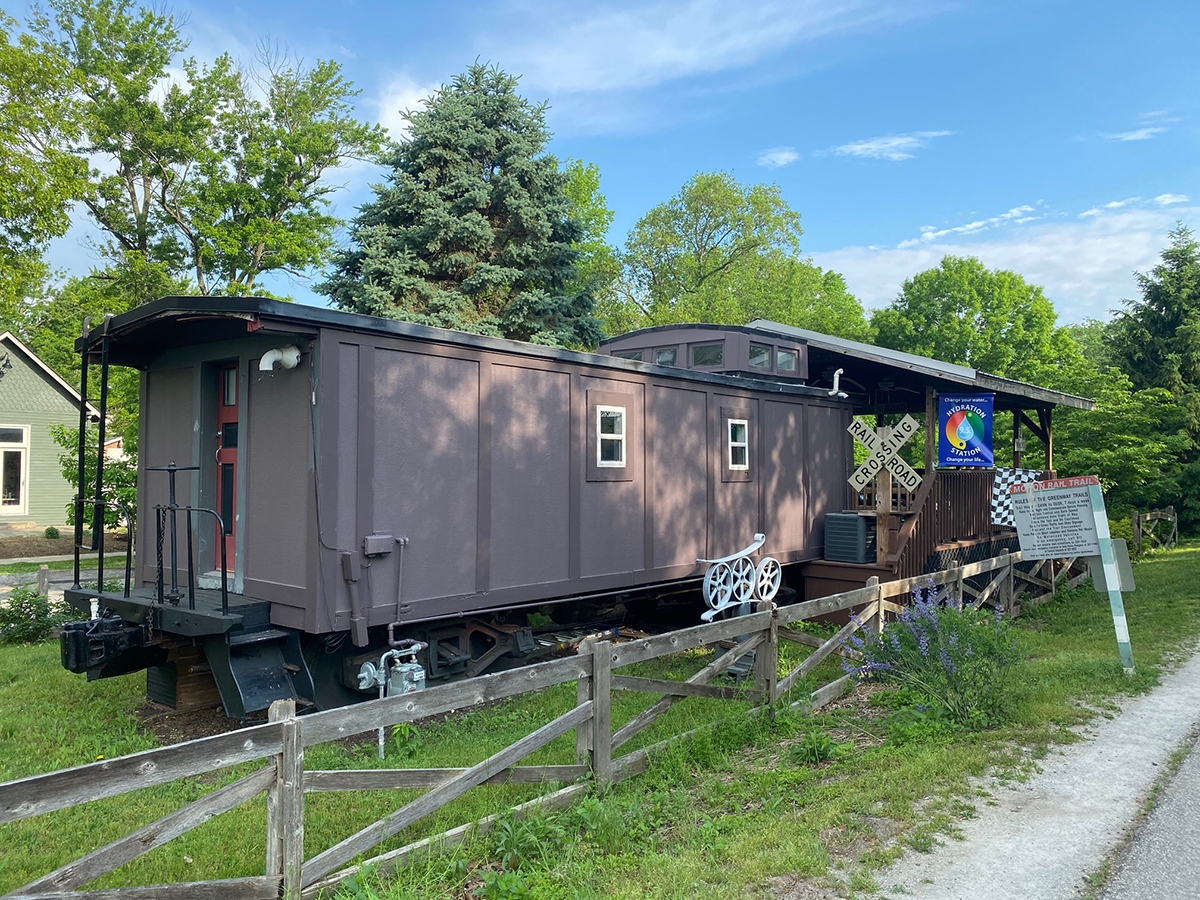 The caboose has occupied city-owned land adjacent to the Monon Trail in Broad Ripple for a half-century. (IBJ photo/Mason King)

City officials are demanding the removal of the well-known red caboose in Broad Ripple from the Monon Trail by the end of the month, despite efforts by its new owner to keep the train car in its longtime location until a new home is found.

The 117-year-old caboose has occupied a tiny parcel of city-owned land adjacent to the trail, at 6535 Cornell Ave., for a half-century. But Indy Parks & Recreation and the Department of Metropolitan Development are asking for it to be moved elsewhere ahead of a planned widening of the trail this summer.

The parcel of land in question is only 6/100ths of an acre and is in a flood plain.

Kevin Wurster, who acquired the caboose and its attached pavilion in early May through his not-for-profit Juicin4Life, told IBJ he asked the city for more time to move the caboose, but the city denied the request.

He said he gathered more than 1,000 signatures for a petition asking to the city to keep the caboose in place, but he has since “given up” after the city said it wouldn’t take the petition into consideration.

Wurster said he’s in conversations with a group in Hendricks County about relocating the caboose there, but nothing has yet been finalized.

“If we can move it, we will, but they’re not giving us the time frame to do it,” he said, “so it’s probably not going to happen.”

Indy Parks confirmed in an email to IBJ that the city “is not extending the removal expectation or date.” The caboose will become city property if it’s not removed from the trail by May 31, the parks department said, although it did not say what would happen to the caboose if the city took ownership.

Wurster had planned to open a health-focused juice bar in the caboose, if it had been permitted to stay. The bar would have featured CBD-infused juices and alkaline water.

Indy Parks said it had conversations with Wurster and previous caboose owner JR Walsh about removing the train car and notified them it must be cleared from the property by the month’s end. Part of the motivation, the parks department indicated, is that the city has missed out on thousands of dollars in potential property taxes over the past 20 years even though the site housed a private business.

“Over the past several years, Indy Parks has evaluated the future of the Monon Trail space presently occupied by the red caboose,” the department said in a written statement. “The previous lease agreements with the caboose owner have expired, and the city is now footing the full annual property tax bill without receiving compensation for taxes as the owner operates and/or leases a business out of the structure.”

Indy Parks said it has not yet finalized plans for what will become of the land that houses the caboose, but “will continue to evaluate future uses for the space, including considering upcoming construction with the widening of the trail.”

According to Waymarking.com, the caboose was built in 1904 and was part of the New York Central Lakeshore Lines. The train car became part of the Monon Rail System in the late 1960s and traveled the tracks that now form the Monon Trail.

During the a bankruptcy in the 1970s, the train car—along with another caboose that was later removed—were sidelined on a side spur in Broad Ripple. It has remained there ever since.

The city took control of the rail line property and the caboose through eminent domain and sold the caboose to an entity owned by Elizabeth Dillon called Little Red Caboose Inc. in 1999. Indianapolis, however, maintained ownership of the land on which the caboose sits. Dillon signed a 10-year lease for the land the same year she acquired the train car.

Walsh bought the caboose from Dillon in 2007 and extended the land lease with the city for 10 years in 2009 at $1,800 per year. Walsh renovated the caboose and operated his business, JR Walsh Realty, from the property.

In 2015, the city exercised its right to terminate the lease following a dispute with Walsh over which party was responsible for paying annual taxes for the property, as well as a disagreement over the validity of the lease.

But city officials allowed the caboose to stay on the property until Indy Parks determined next steps.

Walsh told IBJ he tried to continue conversations with the city about re-upping the lease on new terms, but said city officials were unresponsive. In 2019, the city put out a request for proposals for the land, but ultimately never selected a winning bid.

Walsh said he submitted two proposals himself. One would have allowed the city to purchase the caboose for $2 and another would have donated the caboose to the Indy Parks Foundation, he said. He said that after back-and-forth discussion with city officials—including a denial from the city about ever receiving the proposals—he heard nothing until late 2020, when the city called for him to remove the caboose.

He said he asked the city for at least six months to market the caboose and find a potential buyer or other solution—which officials agreed to, giving him until May 31 to remove the train car from park land.

Wurster said he was aware of the dispute with the city when the property was conveyed to him by Walsh and his real estate firm. He said he acquired it with the hope of preserving the caboose in some way.

He said while the situation with the city has led him to consider moving elsewhere, he still plans to open a juice bar at different location in the Broad Ripple area with an unidentified partner. Wurster previously had a CBD shop on College Avenue, but cleared out from the space after construction of the Red Line disrupted business.

“A lot of people have told me they truly love what I’m trying to do at least … even though the government won’t allow this thing to stay,” he said. “This piece of history is going to end up some parking spaces, and that’s the most disgusting thing.”

Like Wurster, Walsh said he doesn’t regret investing in the caboose—he bought it for $65,000 and spent tens of thousands of dollars on improvements—but is is saddened by the city’s call to remove the landmark.

“The city is gonna lose an historical component of Broad Ripple, which is rather unfortunate,” he said. “I’m very disappointed. The city of Indianapolis—Broad Ripple, specifically—deserves better.”

The Swan Dive Continues in Ripple XRP After the Breakout, But Will $0.50 Hold?

The Connection Between Cryptocurrency and Online Gambling