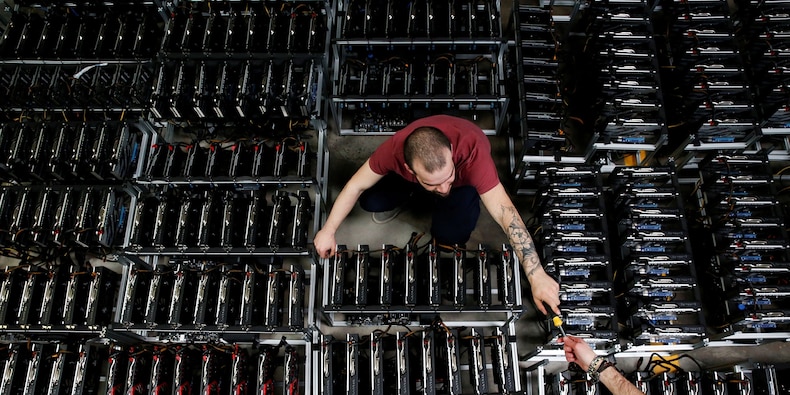 Cryptocurrency mining stocks had a tough day on Wednesday as bitcoin tested its key $50,000 support level.

Despite recent bullish news, bitcoin has struggled to find price support over the past week.

On Wednesday, Elon Musk said Tesla would accept bitcoin as a form of payment in a Tweet. The news caused bitcoin’s price to jump 5%, but it quickly fell back down.

That’s a big change from when Tesla announced its $1.5 billion bitcoin buy back in February and bitcoin’s price shot up to record highs in a sustained move.

In other bullish news for bitcoin, Jordan Belfort, known as the inspiration behind the movie “Wolf on Wall Street,” said he believes bitcoin will hit $100,000 per coin in a recent interview with Fortune.

“Over the past year, they greatly outperformed Bitcoin, which accelerated when the $20,000 all-time high was breached,” Shimron said. “We expect this dynamic to continue as the bull market plays out.”

However, there has been some bearish bitcoin news of late as well.

Crypto analysts at Glassnode found that there had been a pickup in “wealth transfers” from long-term bitcoin holders to newer speculators in their weekly analysis, which the company said was reminiscent of market peaks of the past.

Additionally, in a Bloomberg opinion column, Noah Smith said he believes other counties “will follow Inner Mongolia’s lead and ban Bitcoin mining” due to its ever-increasing energy consumption.

Riot Blockchain purchased an additional 1,500 S19j (90 TH) Pro Antminers from Bitmain on March 15. And Marathon Digital Holdings announced it will hit a hash rate mining capacity of 1.4 EH/s (exahash per second) by the end of March after 10,300 S-19 Pro ASIC miners were shipped to the company over the past month.

US-based miners are adding capacity so rapidly that the country has been expanding its total market share of bitcoin mining operations.

According to data from the University of Cambridge, US bitcoin mining market share went from 4.06% in the third quarter of 2019 to 7.24% in the second quarter of 2020.