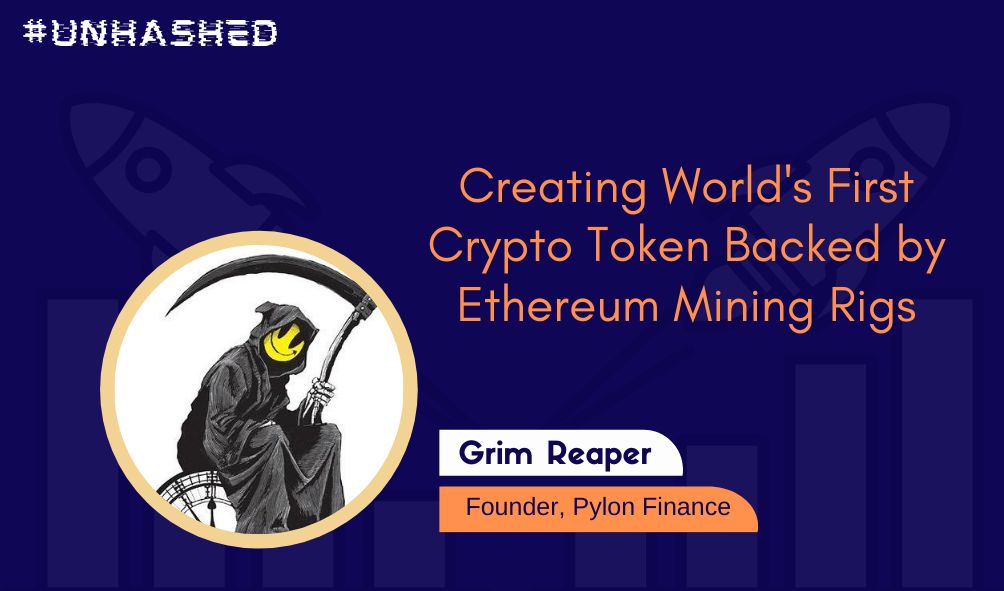 B2B copywriter || Fintech || Blockchain and Cryptocurrency.
Get in touch for copywriting projects.

Cryptocurrency mining plays an important role in the operation of proof-of-work blockchains. It is the process of approving cryptocurrency transactions on a blockchain in exchange for mining rewards. And while most of the crypto mining discussions revolve around Bitcoin mining, there’s more to the picture.

Even the second largest blockchain network Ethereum and its native cryptocurrency Ether rely on crypto mining. So, for this interview, we have the anonymous founder of the largest Etheruem mining farm in the United States. The founder goes by the pseudonym… wait for it… “Grim Reaper.”

Backed by his mining operations, the Grim Reaper has also created a new crypto token called PYLON. He claims PYLON to be the world’s first crypto token backed by tangible income-generating assets.

In this interview, we discuss Grim Reaper’s crypto story, the reason for his anonymity, crypto mining, EIP 1559, and more.

Q1: Everyone in the blockchain space has a story of how they landed here. What’s your story, why did you decide to keep your identity anonymous, and how did Pylon come into being?

Answer: A couple of years back I met a guy online who always bantered about Bitcoin and the future of crypto. After getting to know him and the industry I suggested that we do a test run of 100k worth of miners, and so we did.

From there, scaling proved fairly difficult in many ways. Obtaining mining hardware in bulk was almost impossible back then. We planned to start on an industrial scale but could barely get our hands on enough mining rigs.

In hopes of getting some assistance, we attended the tech event CES in Vegas and met every GPU manufacturer to work a deal. We reached AMD, XFX, Asus, and Samsung. After obtaining just the bare minimum, we started scaling our operations. Later, we also approached one of our GPU providers for custom hardware, but they were not motivated due to the small order quantity and other self-interests.

This led to the invention of the Reaper miner. I offered them exclusive access and promised them that we would never ship the machines, or sell to anyone what we do for them.

Fast forward a couple of years, I hopped onto the DeFi space and started farming Yam and a bunch of other protocols, gathering data, making mistakes, learning from mistakes, and reaching a point where I was ready to build Pylon.

The goal of Pylon is to bring a real-world tether system into the existing Defi infrastructure. We want to offer a crypto token that is backed by real-world tangible assets, which in our case is GPU mines on US soil — on land you can see and own — along with mining hardware you can touch and feel.

Regarding the anonymity bit… I prefer to keep my identity anonymous because of relationships in place, political dealings, and risk calculations that are not to be mentioned. It is not for any of the typical reasons you may see in the space. It is mainly to protect the integrity of NDAs and if you look deeply enough, you can find out who we are. After all, we are the largest GPU miner in the States and our footprint is easy to track if you know what to look for or have the correct tools.

Q2: Pylon has one of the largest Ethereum GPU mining farms in the United States. In numbers and statistics, how large is the mining farm? What have been the biggest challenges of operating a mining farm in the U.S.?

Answer: Our mine approximately consumes 40MW. To paint a better picture, we are able to condense electricity consumed by cities and villages in the foot span of a football field.

Our main challenges include –

Getting approval — You need sealed drawings from engineers for everything as it needs custom interpretation. Municipalities don’t want to take the risk, so engineers must bear liability for design failures.

Cooling —  It was very difficult due to how expensive HVAC is, so we designed a mobile wind tunnel and designed our reapers to interlock, creating a flush wall. This turned the reapers into a hot-cold wall combo built within the machine. But prior to this, we built 60-foot buildings with nuclear-grade turbines. It works, but density is an issue and maintenance needs more redundancy.

Electrical costs — No one respects you until you start spending $10M. So it was a grind up until that point. After that, we were able to negotiate for better economic deals, tax savings, and have other incentivized structures in place.

Hardware —  There were many instances when incompatibilities tore our process apart. From software to systems, to wiring, and so on. You say it and we’ve dealt with it all. It didn’t stop until we produced a 100% customized miner and also a customized building that is tailored to exactly fit all the miners. This was the end result of six years of hard work.

Q3: Pylon’s crypto token, PYLON, is said to be the “first and largest cryptocurrency token backed by real-world income-generating assets.” Can you elaborate what is the value proposition behind PYLON, its business model, and what makes it unique?

Answer: The goal of Pylon is to bring a real-world tether system into the DeFi infrastructure we already have. As already stated, we wanted to give users a token that is backed by real-world tangible assets and not just by a concept or software. We call them “income-generating” assets because the value of the tokens are backed by two things: first, the mining rigs and second, the land on which the mining rigs are based. And while the rigs mine crypto and create income, the land automatically grows in value over time.

There aren’t many projects whose tokens are entirely backed by income-generating assets like ours, which makes our project and token unique.

Q4: Pylon has a circulating supply of only about 8,000 tokens. What’s the idea behind restricting the token supply to such a small number?

Answer: 7,700 to be exact. We look at our work with pride. It’s a luxury good. There should never be enough of that good and it should demand its price accordingly.

Q5: How do you think the Ethereum Improvement Proposal (EIP) 1559 will impact miners?

Answer: EIP-1559 has become a very controversial subject for miners and developers. Developers don’t mine and therefore have no interest in mining rewards. Miners don’t develop, therefore, don’t have any interest in reducing gas costs. Initially, the plan after ETH goes from PoW to PoS, miners will shift to other coins that can meet their ROI standards.

Us miners are very simple. We want to make more return than the cost of electricity plus overhead costs. We go to war for the best electricity rates and are willing to suffer any conditions for it.

So what impact will EIP-1559 have on miners? After research and discussions, we learned that the gained volume and transactional friction along with the base fee/tip system combined with the inevitable growth of the network will bridge the gap lost from the high block transaction fees.

This will resolve congestion for a short while, but the network will scale accordingly and decide what the next evolution will look like.

Q6: The Ethereum network has started its transition from proof-of-work to proof-of-stake. Once the transition is complete, how do you intend to keep Pylon’s business intact and profitable?

Answer: We are able to mine over 10 crypto assets. As miners, our only concern is electricity cost vs. hashrate output. Meaning, we will enjoy ETH until it’s done, and just like BTC back in the day when it was mineable by GPU. When it was over, a new token took its place and slowly ramped up accordingly. At the end of the day, it’s the cost of electrical vs. output daily that we are actually concerned about not what coin we need to mine. It’s that simple.

Read more about Ethereum’s transition from PoW to PoS here.

Disclaimer: The sole purpose of Unhashed is to unhash (decode) information about projects innovating using blockchain and cryptocurrencies and share it with the community.

The writer does not have any vested interest in any of the projects covered herein. Not that this article shares any, but still, taking investment advice from strangers on the internet is not a wise thing to do.