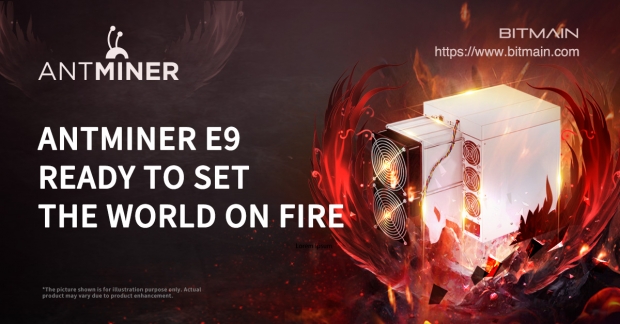 Bitmain has just announced its new Antminer E9 Ethereum ASIC miner, which is an absolute unit of a crypto mining rig that is capable of pushing 3GH/s of Ethereum hash rate power. Check out the teaser:

But if you consider those 28 x GeForce RTX 3080 graphics cards would be consuming around 7500W, the new Bitmain Antminer E9 is using just one-third the power and would also take up far less room. This means those huge crypto mining farms could buy as many of Bitmain’s new Antminer E9 Ethereum ASIC miners as possible, and have some truly crazy hash rate power at their fingertips.

I want to know what’s ticking inside of the new Bitmain Antminer E9… so as those specifications are revealed we’ll keep you posted. It will be interesting to how many Bitmain will be able to make, but previous reports have said that Bitmain approached TSMC with an offer the Taiwanese company couldn’t refuse, taking most of TSMC’s allocation for crypto mining chips.

TSMC has pulled the amount of wafers it is making towards crypto mining firms, but Bitmain was able to work out a significant deal for high-end chip capacity from TSMC and scooped up a majority of the capacity. This means other crypto mining firms wanting to make ASIC miners are left out in the cold, while Bitmain is able to dominate thanks to TSMC.

The manager of a $1.1 billion blockchain ETF that’s returned 47% over the past 3 years highlights 13 under-the-radar stocks that could become ‘the...