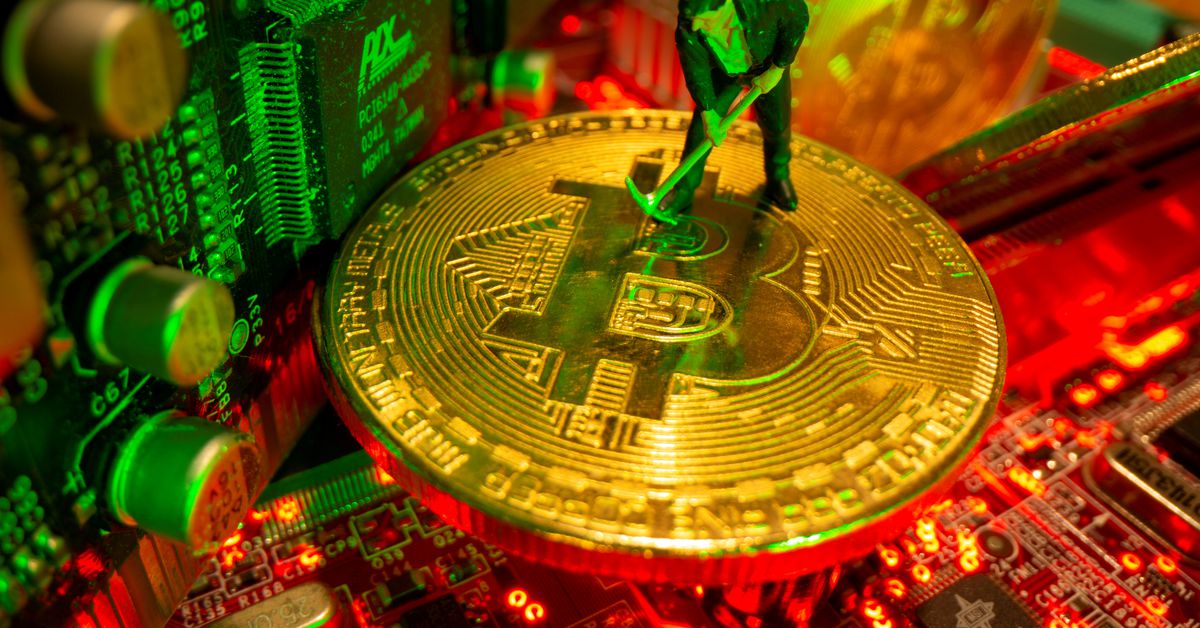 HONG KONG/SHANGHAI, July 7 (Reuters) – Large bitcoin miners fleeing China to escape a state crackdown will take many months to start operating again, as data centres from Texas to Siberia scramble to secure space and power for them, while many smaller players may struggle to move at all.

Bitcoin is created or “mined” by high-powered computers usually at data centres in different parts of the world, competing to solve complex mathematical puzzles in a process that makes intensive use of electricity.

The industry in China, which accounted for as much as 70% of the world’s capacity, is in disarray after the State Council, or cabinet, announced a crackdown on bitcoin trading and mining in late May targeting financial risks.

Miners in China are now shutting down or looking to move out, seeking tolerant authorities, low temperatures lest machines overheat and cheap electricity – ideally surplus power from hydro plants or oil fields that would be wasted.

The power consumed by bitcoin mining globally in early July equates to an annual consumption almost as large as Austria’s, according to estimates from researchers at the University of Cambridge, even after falling 50% since May.

While the move is set to fuel the emergence of new mining centres in the longer term, for now the miners are running into limited data centre capacity overseas and logistical challenges.

“None of these guys are getting online in June or July,” said Thomas Heller, chief business officer of Compass Mining, explaining miners needed to collect machines scattered around China, test, clean and pack them, ship them abroad, and get through customs before installation.

The logistics are harder for smaller Chinese miners with less cash on hand to pay for shipping, and who are also unfamiliar with operating overseas so may struggle to find hosting centres they can trust, miners say.

Nonetheless Compute North, which runs data centres hosting bitcoin miners in Texas, Nebraska and South Dakota, for example, is accelerating expansion plans slated for next year to meet “a massive influx of inquiries” from China.

“There’s no doubt in my mind that we’re going to see a lot of computers sitting in warehouses for the next six, nine, 12 months as the infrastructure catches up,” said Compute North Chief Executive Dave Perrill.

“We are targeting the first and second quarter of 2022 for large scale deployments … (but) it’s not a simple switch, it takes a lot of complex engineering, procurement and construction.”

Moscow-based BitRiver, which operates data centres in Siberia hosting bitcoin miners, has accelerated plans to build new facilities and expand existing ones to meet some of the demand from those leaving China.

BitRiver estimates demand for space in its facilities will rise to 1.5 million mining machines requiring up to 2.5 gigawatts of power, dwarfing its current three data centres’ 125 megawatts.

“We know companies are leaving China because they are running straight to us,” BitRiver spokesperson Roman Zabuga said.

China’s ban on bitcoin mining may see up to 90% of all mining in the country go offline, according to an estimate by Adam James, a senior editor at OKEx Insights. Some miners are dumping machines in despair.

Kazakhstan simply doesn’t have enough ready-to-use space in data centres to host all those miners, he said.

The ructions in Chinese bitcoin mining, however, are not bad news for everyone.

The algorithm governing bitcoin keeps production at a regular pace, adjusting roughly every two weeks to require more computing power to generate bitcoin if many machines are mining, or less if fewer.

“A lot of countries previously untapped by bitcoin miners, like in Southeast Asia, South America or Australia will be incentivised to use their stranded renewable power,” he said, “These energy markets weren’t needed before.”

Reporting by Alun John in Hong Kong and Samuel Shen and Andrew Galbraith in Shanghai, additional reporting by Alexander Marrow in Moscow and Allison Lampart in Montreal; Editing by Sumeet Chatterjee and Lincoln Feast.