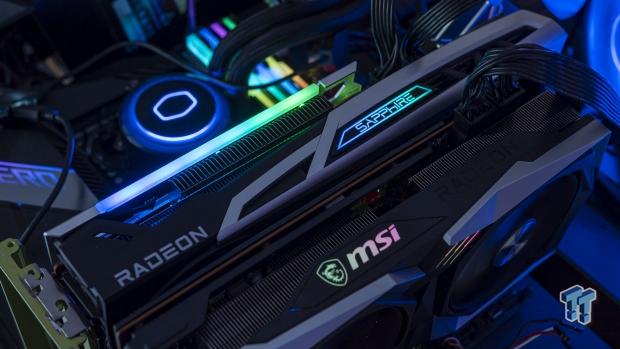 Note: We are entering the forbidden territory here: talking about GPU crypto mining, but I’m a geek and I love this stuff so we have to have some disclosure. First off, I pay a f*** load for power here in Australia and I pay my own power bills. I have a ton of hardware here that I test all day every day, every week of every year for the last 10+ years.

I love all things GPU-related and when crypto mining started it was a totally new venture, it felt like the current GPU market opened up and doubled — an entirely new thing to tweak when it came to your GPU and computers in general. Oh, you had a bunch of graphics cards? Well if you do these steps, then you’ll make magic internet money from “mining” cryptocurrency and providing GPU hash rate power to the “blockchain”.

So the GPU and tech enthusiast in me wanted to know more, more, more.

Into the mine I went and I spent tens of thousands of dollars on hardware over a 12-18 month period, had some of the most fun of my life, I learned so much about a new thing (cryptocurrency + GPU mining + power + cooling + more) over thousands of hours. I was mining on 60+ graphics cards and purchased entire shelves of graphics cards from a retailer at one point.

Collecting the PCIe riser cables, high-end PSUs were expensive AF and hard to find — mining chassis, and everything in between was so hard to find and acquire at the time. Learning how to use it was relatively new, as it was before crypto mining really went to the next level in 2016-2018.

In the end I had a gigantic electricity bill and pulled out of GPU mining for a while, sold a bunch of graphics cards but kept everything else that I had purchased: high-end PSUs, PCIe riser cables, a bunch of low-end motherboards and CPUs and a bunch of kits of DDR4 memory.

Once GPU mining profitability skyrocketed recently, I started seeing more and more people mining on their graphics cards again. I had been head-down into so many back-to-back GPU launches and a million-and-one custom Radeon and GeForce graphics cards that most people still can’t buy.

I hesitated in writing about GPU mining since then, but then news of the GeForce RTX 3060 hash rate limitations from NVIDIA piqued my interest — as too did the GeForce RTX 3060 Ti GPU mining performance and the Radeon RX 6700 XT graphics cards. It doesn’t seem like many people are covering the Radeon RX 6700 XT and its crypto mining performance so I thought I would take a look at it and compare it to a few graphics cards either side of it.

There are plenty of other specific miners out there but the easiest one to use is NiceHash, and no — they have not sponsored this post whatsoever, I’m using it because I have too much work to do and don’t have enough time tinkering with specific Bitcoin mining machines.

NiceHash Miner is a great package that is a quick download and install, and then it’ll detect and benchmark your hardware — both CPU and GPU. If you don’t want to crypto mine away with your CPU then disable it specifically, leaving NiceHash Miner to take control of all available GPUs in your system. You can however disable specific GPUs and enable only the cards that you want at any time.

You can set up notifications on the NiceHash app so that you’ll get push notifications when a mining machine goes down, or when you get a payment (which is every 4 hours). I find this incredibly useful, for when I’m laying in bed or when I’m out and about and I can quickly check and keep an eye on — and even tweak — my mining machines from anywhere in the world (if lockdowns weren’t a thing still). 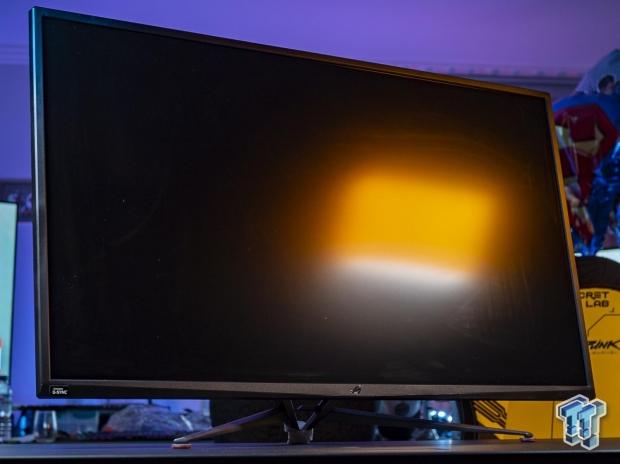 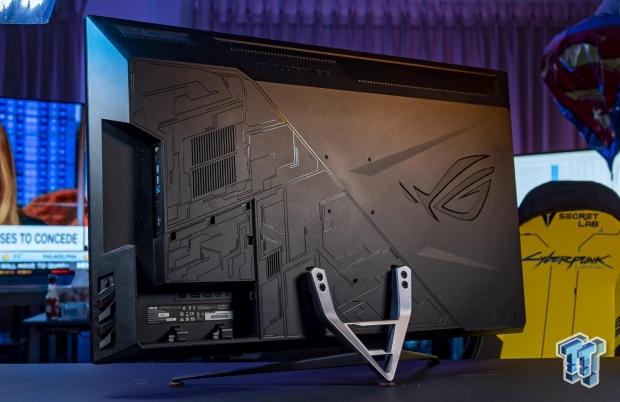 ASUS provided a rather large upgrade to my GPU testing lab — or rather, I kept the ASUS ROG Swift PG43UQ gaming monitor after my review on it. The 43-inch 4K 144Hz panel is just glorious to look at — it’s huge, the DPI for Windows 10 when set perfect for your viewing distance is kiss-fingers-emoji good. It’s just amazing — for work, and gaming.

Sabrent sent over their huge Rocket Q 8TB NVMe PCIe M.2 2280 SSD, which will be my new Games install SSD inside of my main test bed.

I’ll be making some changes over the coming months to the GPU test bed here for TweakTown, to both the Ryzen 9 5900X and then Intel’s new Core i9-11900K to do some proper PCIe 4.0 testing between the chipsets for GPUs + super-fast load times into games on these new super-fast Sabrent SSDs.

Sabrent helped out with some new storage for my GPU test beds, sending over a slew of crazy-fast Rocket NVMe PCIe M.2 2280 SSDs. I’ve got this installed into my GPU test bed as the new Games Storage drive, since games are so damn big now. Thanks to Sabrent, I’ve got 2TB of super-fast M.2 PCIe 3.0 x4 SSD storage now. 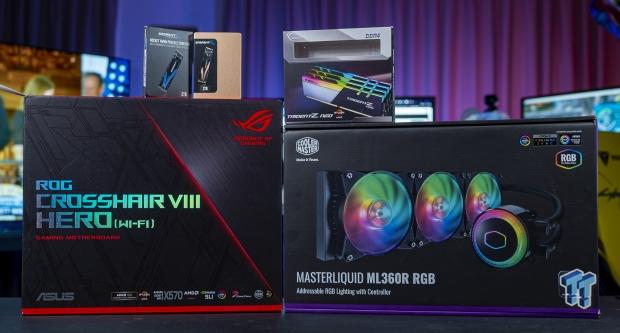 I’ve recently upgraded my GPU test bed — at least for now, until AMD’s new Ryzen 9 5950X processor is unleashed then the final update for 2020 will happen and we’ll be all good for RDNA 2 and future Ampere GPU releases. You can read my article here: TweakTown GPU Test Bed Upgrade for 2021, But Then Zen 3 Was Announced. 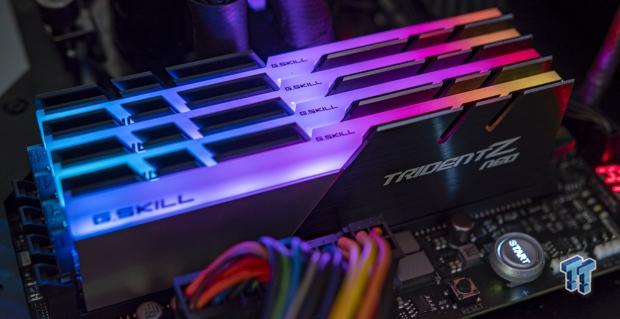 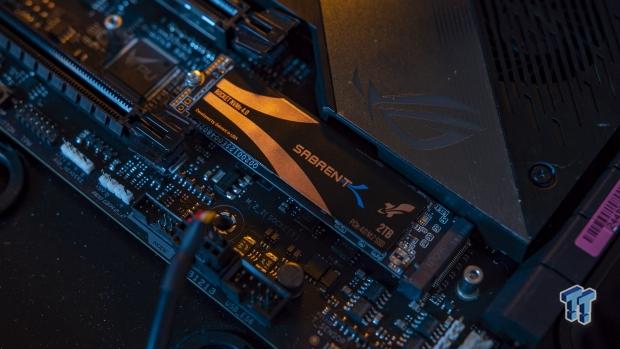 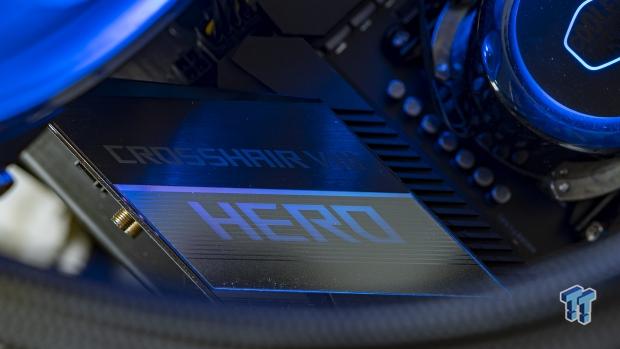 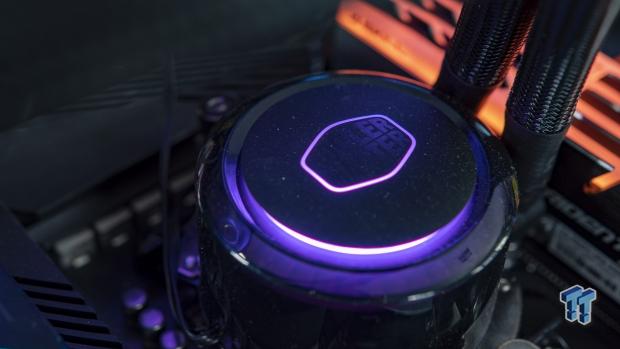 Going into AMD Radeon Software and moving over to the Performance tab and then Tuning, and you’ll have access to tweaking your Radeon RX 6700 XT. Your results will vary, but I was able to drop the max GPU frequency to 50% (or less) and the GPU voltage to its lowest setting and we have a totally stable ETH mining experience with the Radeon RX 6700 XT. 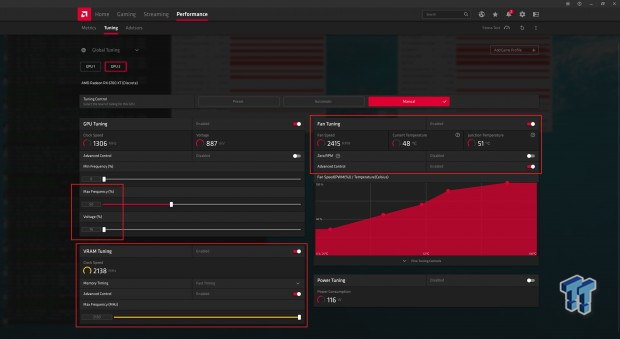 Next up you will want to move over to the VRAM Tuning section in the bottom left, and in Memory Timing enable Fast Timing. After that you’ll want to click Advanced Control which will let you slide up the GDDR6 memory overclock a little further, with my Radeon RX 6700 XT cards all pushing the GDDR6 up to 2150MHz.

You’ll want the card running as cool as possible, so I used a tweaked fan profile that keeps the GPU temperatures on the Radeon RX 6700 XT at under 60C. 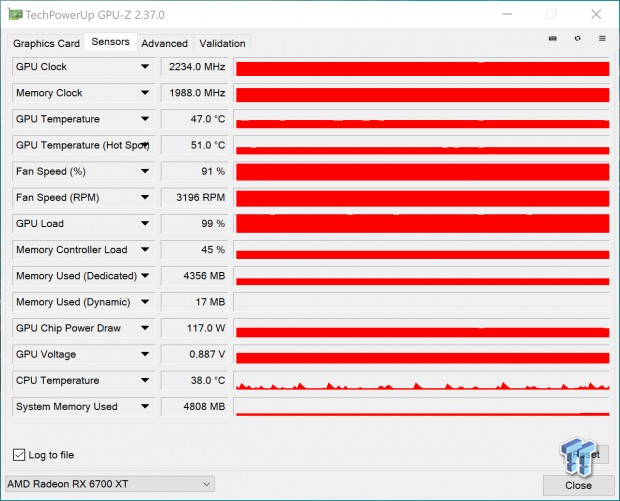 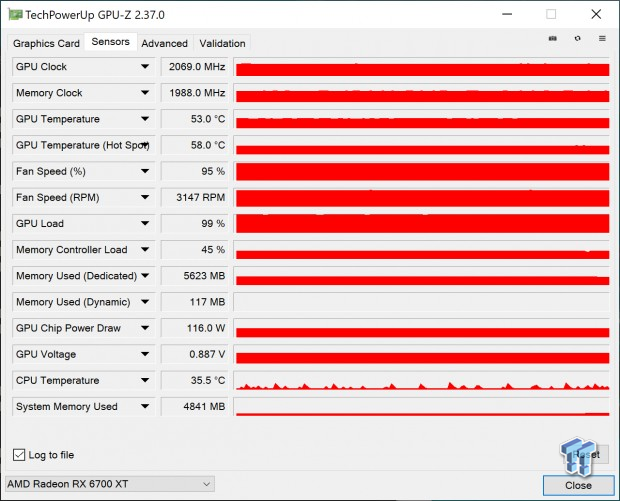 Using the SAPPHIRE NITRO+ Radeon RX 6700 XT and MSI Radeon RX 6700 XT GAMING X side-by-side in my GPU test bed, I ran NiceHash and let it run with its benchmarks until it lands on whatever is the most profitable of the day. For the sake of keeping the benchmark results comparable between GPUs I’m taking a look at Phoenix Miner and the DaggerHashimoto algorithm to mine Ethereum (and then get paid in mBTC through NiceHash). 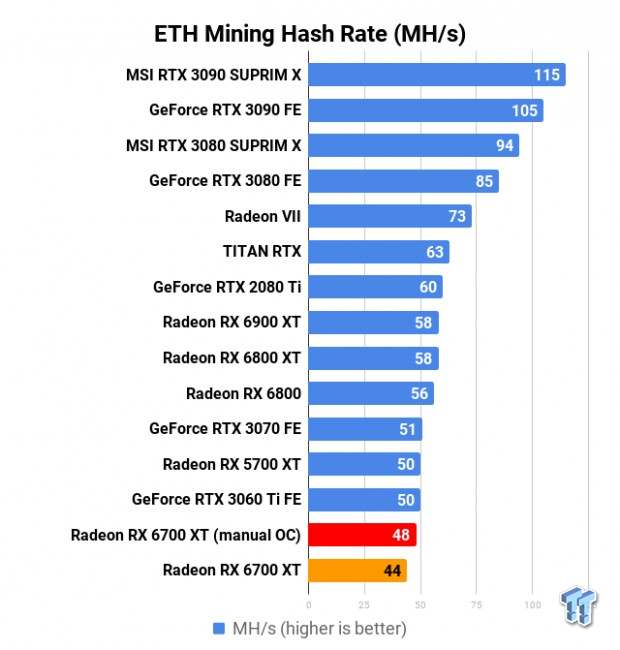 At stock settings any Radeon RX 6700 XT graphics card — be it the reference card from AMD or a high-end custom AIB partner card model — will hit around 43-44MH/s mining ETH. But there are a few tricks you can do to keep that same ETH hash rate mining power, but drop the power by 50W with just a few clicks.

If you’ve got a few Radeon RX 6700 XT graphics cards in your system then 50W power savings per GPU is huge, especially when you’ve got 4 or 5 or 6 of them in your machine that can add up to 200-300W of power savings in total. Even in the system I was testing with the 2 x Radeon RX 6700 XT graphics cards when tuned saved me 100W+ of power consumption, which adds up when GPU mining machines are on 24/7. 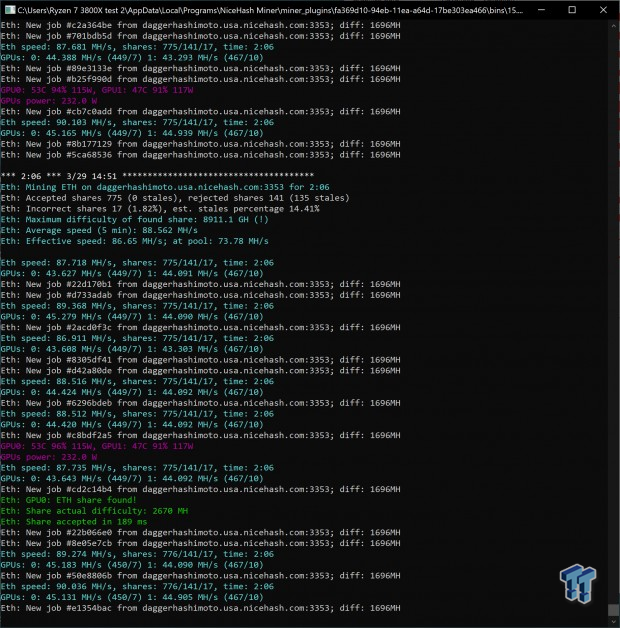 Here’s the performance after a few hours of mining — versus other ETH and crypto mining articles and benchmarks that only have them running for a minute or two. VRAM temperatures do get pretty hot, pretty damn fast — especially on NVIDIA’s new Ampere-based GeForce RTX 30 range and more specifically the GeForce RTX 3080 and GeForce RTX 3090 graphics cards.

But from a pure ETH hash rate mining performance perspective, NVIDIA slays with its GeForce RTX 3060 Ti graphics card which can give you 50MH/s out of the box before it’s tweaked… and even better results from a custom card from the likes of MSI or ASUS. It can also be found with a single 8-pin PCIe power connector which makes it ideal for GPU crypto mining farms.

On the Radeon RX 6700 XT though, that’s not an issue — we have GDDR6 and only 120W of power being consumed without oodles of heat being pumped out of the card.

If you are wanting to build a new GPU crypto mine and you can actually find more than one — if you can find one at all — of AMD’s new Radeon RX 6700 XT graphics cards would you fill a system or 10 with them for crypto mining?

Well yeah, of course you would — but if you could buy NVIDIA’s superior GeForce RTX 3060 Ti and fill a system with 10 of the custom Ampere GPUs over the custom RDNA 2 GPUs? Well, yeah. But that doesn’t mean the Radeon RX 6700 XT is a bad card for mining, it’s far from that — 44MH/s to 48MH/s at around 120W is not too damn bad at all. 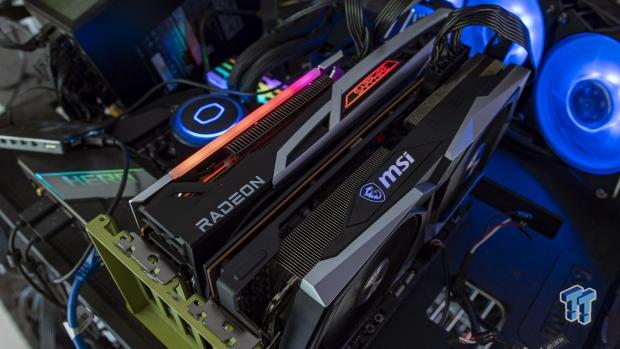 The cards barely ran hot at all during 24/7 crypto mining which is another big win, compared to the 100-110C temperatures on the super-fast GDDR6X memory on NVIDIA’s flagship GeForce RTX 3090 graphics card. Sure, it gets 95-110MH/s of ETH mining hash rate power, but those GDDR6X temps scare me.

NVIDIA’s flagship GeForce RTX 3090 Founders Edition runs incredibly hot (well the GDDR6X memory does) and will fill a room with toasty mining heat within minutes, but that’s not the case for AMD’s new Radeon RX 6700 XT — at least in custom form from MSI and SAPPHIRE. The cards run whisper quiet, and nice and cool — and don’t need lots of tweaking to get the noise and temperature levels down.

This adventure has led me to want to order some new thermal pads for my GeForce RTX 3090 FE graphics card, as I’ve been seeing around the internet that people are getting 20-25C drops (!!!) in GDDR6X temperatures on the RTX 3090 FE by replacing the thermal pads on the card.

I’ve got a few exciting things to get out of the way first, but that is coming… 20-25C reduction in GDDR6X memory temperatures is enough to make me pull the GeForce RTX 3090 FE apart that’s for sure.