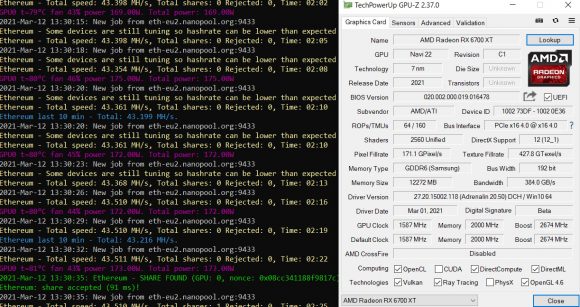 We got a tip with the actual mining performance that the new AMD Radeon RX 6700 XT GPUs deliver for Ethereum (ETH) mining and as you can see on the screenshot above you can get around 43.5 MH/s hashrate with the stock settings shown on the right via GPU-Z. No surprises here and pretty much on par with what we have assumed the RX 6700 XT would be capable of, based on its specifications that are very similar to the ones of the performance limited Nvidia GeForce RTX 3060 GPU. The good news on the new AMD GPU is that there is no artificial performance limiter present, so Ethereum mining hashrate will be around 43 MH/s stock and with overclock of the video memory up to about 47-48 MH/s are apparently possible. 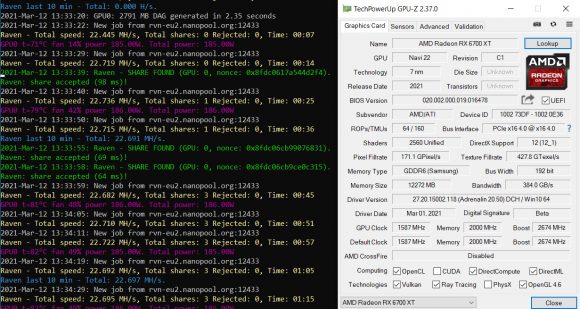 It is interesting to note that not only the Ethereum mining performance is similar to the one offered by the RTX 3060 or more specifically what it is capable, but is artificially limited by Nvidia. Mining Ravencoin (RVN) with the AMD Radeon RX 6700 XT also shows very similar performance with 22.7 MH/s hashrate at stock settings. Since the RTX 3060 is not artificially limited for half performance on all algorithms, the GPU is capable of delivering around 22 MH/s for RVN mining which is almost the same as the RX 6700 XT. It will be interesting to see what the new AMD GPU will be capable of delivering in other crypto mining algorithms as well, but for this we’ll probably have to wait a couple more days for the GPUs to become available and for us to get our hands on one of them in order to test them ourselves.