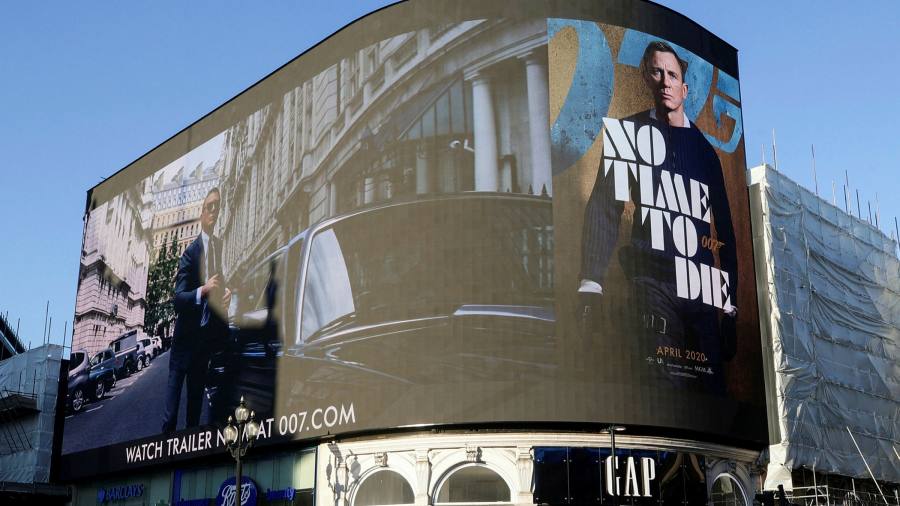 This article is an on-site version of our #techFT newsletter. Sign up here to get the complete newsletter sent straight to your inbox every weekday

Another day, another major media deal, reportedly. The expected consolidation in the streaming wars is happening sooner than anyone expected. It’s like a denouement in the first reel, to use old movie terminology.

Survival depends on compelling content such as movies, and Amazon’s need to reinforce its own back-catalogue is probably behind its talks to acquire MGM, the film studio responsible for the James Bond franchise, for about $9bn. MGM is one of the few Hollywood studios not to have been gobbled up by a larger conglomerate, with Warner Bros operating within AT&T; Fox under Disney; Universal within Comcast; and Paramount inside ViacomCBS.

MGM has been hit hard by the coronavirus pandemic closing cinemas. It has postponed the release of the blockbuster Bond film No Time To Die four times. A deal would substantially bulk up Amazon’s film and TV operations, says Lex. MGM’s expansive content library boasts 4,000 movies, including The Terminator and Rocky, and hit TV shows such as Fargo and The Handmaid’s Tale.

The merger announced on Monday of Discovery and Warner Media will bulk up subscribers, although that combination will still trail Netflix, Amazon Prime and Disney Plus:

Our media team has a cinematic “tick-tock” on how the deal was done. It begins with a planned golf round between AT&T chief John Stankey and Discovery CEO David Zaslav, with the details later hammered out at Zaslav’s Greenwich Village brownstone in April.

“I expected . . . there was likely to be more consolidation,” Stankey told reporters on Monday. “We . . .[wanted to] initiate that rather than have to follow it.”

Lex says AT&T is breaking even on the deal, three years after buying Time Warner for $110bn. The Discovery/Warner enterprise value will approach $150bn, compared to $225bn plus each for Netflix and Disney. Yet the combined libraries of Discovery and WarnerMedia — which includes HBO and Warner Brothers as well as the Turner cable networks — should make the combo competitive in a battle where content is king.

The Internet of (Five) Things

1. How social media is pumping penny stocks
Hundreds of penny stocks traded away from the main US stock markets have had their own frenzied, social media-driven speculation this year, according to an FT investigation, often encouraged by Twitter accounts with cultish followings.

2. Nvidia limits crypto mining
Chipmaker Nvidia said today it was deliberately limiting the capabilities of its most popular video gaming cards to make them less useful for crypto mining. The move was designed to ease an acute shortage facing video gamers and highlights the booming demand from cryptocurrency enthusiasts as prices spiked this year. They are falling right now, with some investors angered at the actions of Elon Musk, reports Alphaville.

#techFT brings you news, comment and analysis on the big companies, technologies and issues shaping this fastest moving of sectors from specialists based around the world. Click here to get #techFT in your inbox.

3. Vodafone steps up post-pandemic spending
Vodafone reported it had increased its capital expenditure by €500m over the past year and had plans to accelerate spending further. The mobile operator, which is also Europe’s largest broadband provider, said the increased spending would be on network investment, new towers and growth opportunities in digital services.

4. DoorDash to deliver in Europe
Food delivery app DoorDash is preparing to launch in Germany, in what will be the US market leader’s first foray into the crowded field of European delivery apps. The company shared 15 job postings on Monday seeking to fill management, strategy and recruitment positions in Berlin. It is not yet clear when it plans to launch. In April, Uber told us it would bring its Uber Eats food service to Germany in a “few weeks”, beginning in Berlin.

5. Thomas and the mod controllers
The most frightening thing in Capcom’s new horror game Resident Evil Village is a modded Thomas the Tank Engine, writes Tom Faber. Thomas is special to modders carrying out the gaming form of a remix — a fan-made alteration that can range from small graphical tweaks to huge overhauls in gameplay.

Google is taking one of the most significant steps yet by a big tech company into healthcare, launching an AI-powered tool that will assist consumers in self-diagnosing hundreds of skin conditions, reports Madhumita Murgia.

Derm Assist is the first of its kind and will launch in Europe this year before being aimed at the nearly 2bn people globally suffering from skin conditions ranging from acne to melanoma.

Users upload images of their medical condition via the Derm Assist website and answer questions about their symptoms. An AI model then analyses the information and generates a list of possible matching conditions. The service will be free to all internet users, whether they are Google users or not. Read more

Recommended newsletters for you

#techAsia — Your guide to the billions being made and lost in the world of Asia Tech. Sign up here

#fintechFT — The latest on the most pressing issues in the tech sector. Sign up here