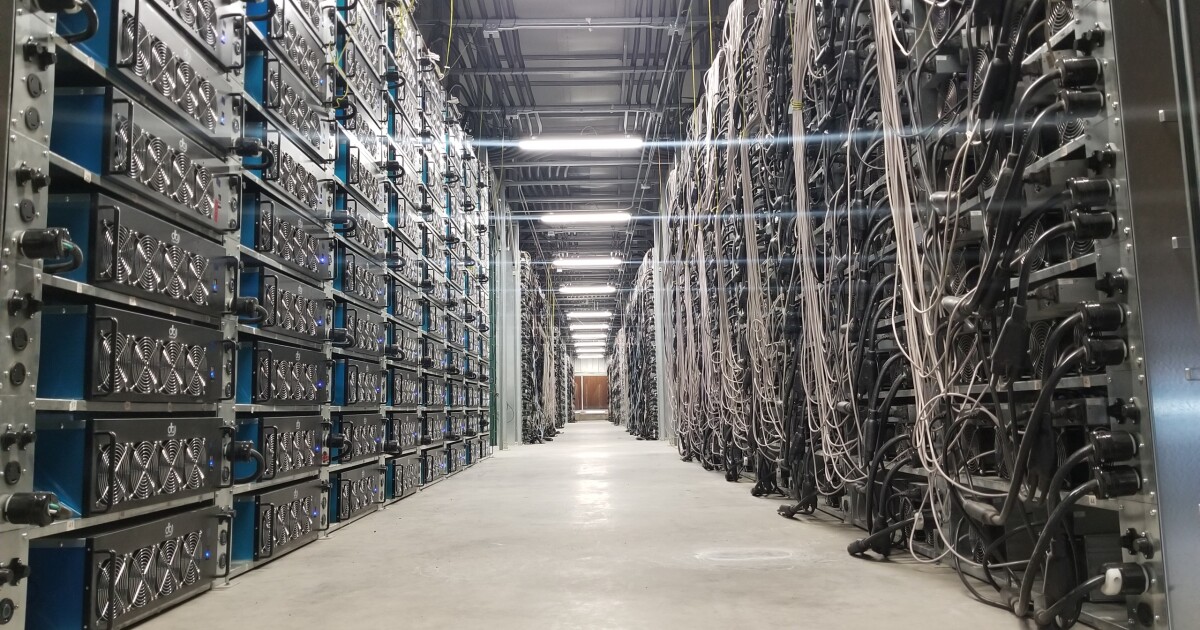 A former lumber facility has morphed into a silver-metallic hub filled with wires, fans and computers — looking more like Star Trek’s Borg cube than a lab. It’s in rooms like these where cryptocurrency comes to life, but at a high demand for energy.

“There is this cloud hanging over how crypto came to be that has bad publicity, from the Silk Road and other bad things that put it in a negative light,” Sheldon Bennett, the CEO of DMG Blockchain Solutions. “You have that and the power usage coming together and people aren’t sure if crypto is good or bad.”

Bennett, one of the leaders of the Christina Lake facility, insists crypto mining can be done efficiently. DMG just joined the Crypto Climate Accord, a network of businesses that are pushing to decarbonize cryptocurrency by using carbon offsets and alternative energy sources. The CCA, which did not return a request for comment, has about four dozen members including Ripple, Consensys and the XRP Ledger Foundation.

The CCA has set a goal of reaching net-zero greenhouse gas emissions by 2040, net-zero emissions from electricity consumption by 2030, and to develop standards and technology to support 100% renewably-powered blockchains by 2025.

“If you can get companies thinking about these issues before deploying new capital for crypto projects, you have a start,” Bennett said.

Cryptocurrency mining’s use of energy has long been a concern, with reports of strained electrical grids in locations ranging from Washington state to China. In Europe, regulators have used bitcoin mining’s energy use as part of the argument to create central bank digital currencies as an alternative.

As cryptocurrency gains the support of large payment companies, the environmental impact of mining is becoming a larger issue. Tesla CEO Elon Musk, who helped spark this spring’s crypto bull market when he announced Tesla would accept bitcoin for payments, recently backed away from the pledge, citing environmental concerns. Musk then Tweeted a chart from the University of Cambridge showing the skyrocketing use of energy in bitcoin mining over the past year.

Bitcoin mining uses a lot of energy because of the computing scale involved. The computers that mine bitcoin and other cryptocurrencies solve digital puzzles that are designed to ensure bitcoin transactions aren’t fraudulent. If their work is successful, the miners receive an award that’s dispensed in bitcoin. It’s an arduous process that could result in the miner getting little or no bitcoin. Additionally, a lot of the energy spent doesn’t result in bitcoin or crypto production.

As a consequence, the energy volume for bitcoin alone is comparable to the entire energy usage of countries like Argentina, Norway or Sweden.

“There’s a disconnect between people who think ‘if I can’t touch it and feel it I don’t care,’ and those who are concerned about energy use,” Bennett said. “Some people value the economic gain of bitcoin and some don’t. And there are those in between.”

DMG’s approach to energy includes its location — it’s on the site of a defunct lumber facility, and uses water-generated electricity instead of coal or natural gas. Bennett says the power line feeding the town (which has a population of little over 1,000) has a 250 megawatt capacity, and the town uses about 30 megawatts.

“What we look for is an opportunity to use hydro and an underutilized power source,” Bennett. “We’re not in the center of Chicago mining crypto.” BC Hydro, the utility that serves Christina Lake, did not return a request for comment.

DMG also seeks partners that are working toward fossil fuel reduction through their own usage of technology. “You can look for opportunities where there’s something missing that can reduce fossil fuels or increase renewables,” Bennett said.

Other firms are issuing cryptocurrency via green energy. Candela Coin just launched a currency that allows holders to transfer solar energy using the Candela Coin as a medium of exchange. Solar-panel owners can sell excess solar energy to neighbors in their community via the coin, obtaining clean energy without purchasing a solar panel. The Washington, D.C.-based Candela has also built a mobile app that acts as a solar marketplace for Candela Coin transactions, and an IoT meter to measure energy.

While blockchains have been used to decentralize energy and support carbon offsets, Candela Coin is trying to provide a single experience to buy, sell and store a cryptocoin tied to energy. Emission-reduction pledges and organizations could bring carbon emissions down for cryptocurrency mining, said Candela CEO Avi Verdugo, adding the overall attention on the environmental impact as cryptocurrencies increase in value and add use cases would hopefully make the launch of his coin well-timed, citing Musk’s reversal on bitcoin payments.

“And hopefully this will encourage people to use their solar panels,” he said.