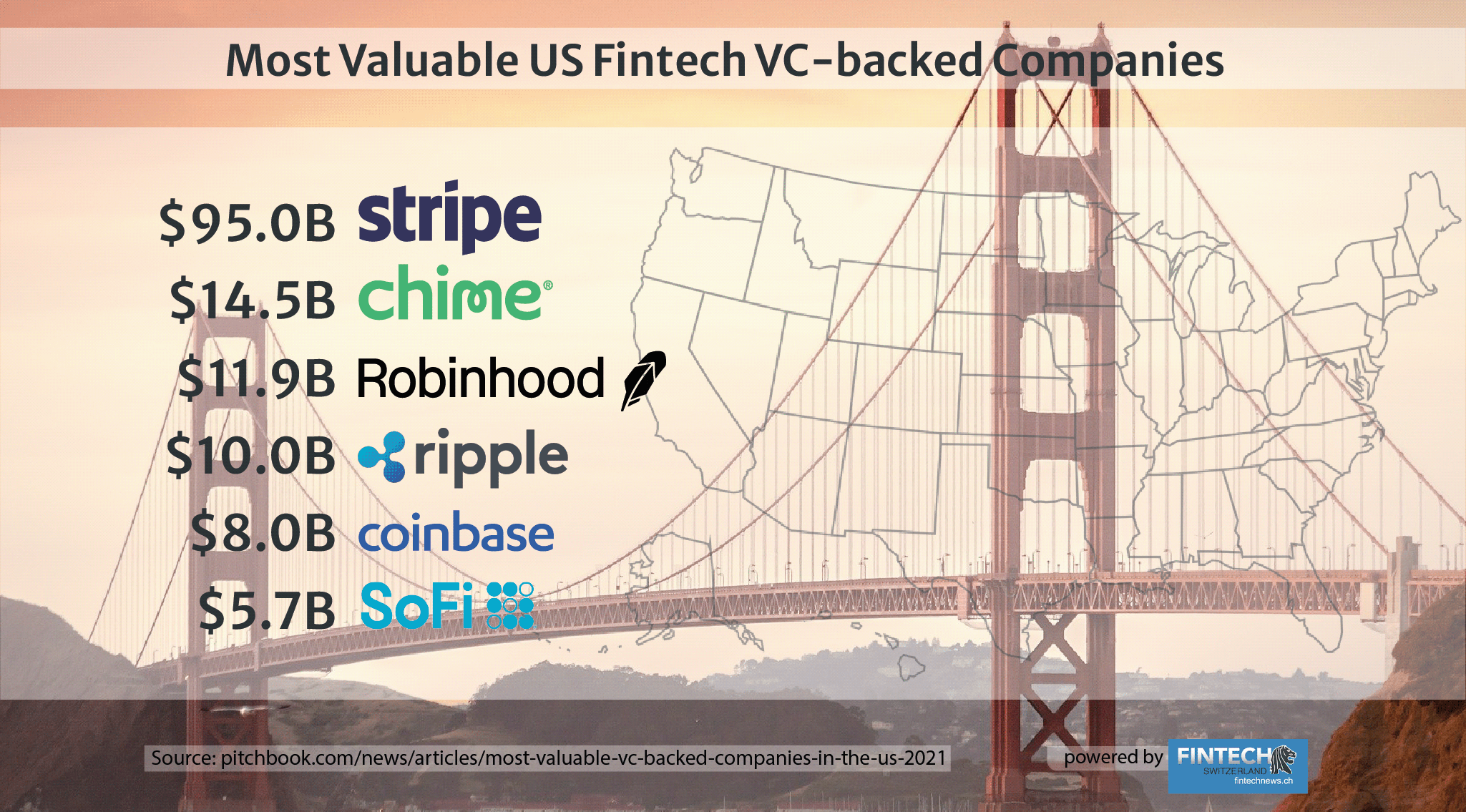 The past two years have seen the valuations of the US’s most valuable venture (VC)-backed fintech companies soar. As of March 19, 2021, six fintechs were amongst the country’s top 20 most valuable VC-backed companies, and worth a combined US$145.1 billion, up 68% from their worth in 2020 of US$86 billion, data from PitchBook show.

Online-based, payment processing platform Stripe is currently valued US$95 billion. It’s the most valuable VC-backed company in the US and the world’s second most valuable one, right after world leader Bytedance, a provider of social networking platforms and the operator of TikTok valued at US$140 billion, according to April 2021 data from CB Insights.

In less than a year, Stripe’s valuation almost tripled after it announced a US$600 million fundraising in March  2021. The valuation overtook billionaire Elon Musk’s SpaceX, which previously was the US’s most valuable VC-backed company.

Stripe valuation throughout the years, Graphic by the Financial Times, March 2021

After Stripe, Chime is the US’s second most valuable fintech company at US$14.5 billion. Chime, a neobank providing fee-free financial services through a mobile app, has had a remarkable growth, joining PitchBook’s Valuation Leaderboard just last year with it doubled its worth from US$6 billion in March 2020 to US$14.5 billion in September 2020. In 2019, Chime was valued at just US$1.3 billion.

Challenger bank Chime surpassed the 12 million customer mark earlier this year, growing its customer base by 50% through the pandemic and becoming the biggest online bank in the US, according to a recent study from Cornerstone Advisors and StrategyCorps.

Commission-free stock trading app Robinhood is the third most valuable VC-backed fintech company in the US, valued at US$11.9 billion since late-2020. This represents a 56% surge from its 2019 valuation of US$7.6 billion.

From its founding in 2013 until the end of 2020, Robinhood gained 13 million users. It added another six million users in the first two months in 2021. Robinhood recently filed for an initial public offering (IPO) on the Nasdaq.

Blockchain startup Ripple Labs is the fourth most valuable VC-backed fintech company in the US, valued at US$10 billion. Ripple Labs develops the Ripple payment protocol and exchange network. The company and two of its top executives are currently being sued by the US Securities and Exchange Commission (SEC).

Ripple Labs is followed by cryptocurrency startup Coinbase, valued at US$8 billion. Coinbase, which operates one of the world’s largest cryptocurrency exchange platforms, counts 56 million verified users, and 6.1 million monthly transaction users. It generated US$1.27 billion in revenue in 2020, up from US$533 million in 2019. Coinbase is going public on April 14, 2021, on the Nasdaq stock exchange.

Finally, Social Finance (SoFi), an online personal finance company, is the sixth most valuable VC-backed fintech company in the US, valued at US$5.7 billion. SoFi provides a suite of financial products that includes student loan refinancing, mortgages, personal loans, credit card, investing and banking through both a mobile app and desktop interfaces.

The startup is set to go public by merging with a special purpose acquisition company (SPAC) run by venture capital investor Chamath Palihapitiya. The merger with Social Capital Hedosophia Corp V would value SoFi at US$8.65 billion.

6 Most Valuable US Fintech VC-Backed Companies:

Most Valuable VC-Backed Fintech Companies in the US